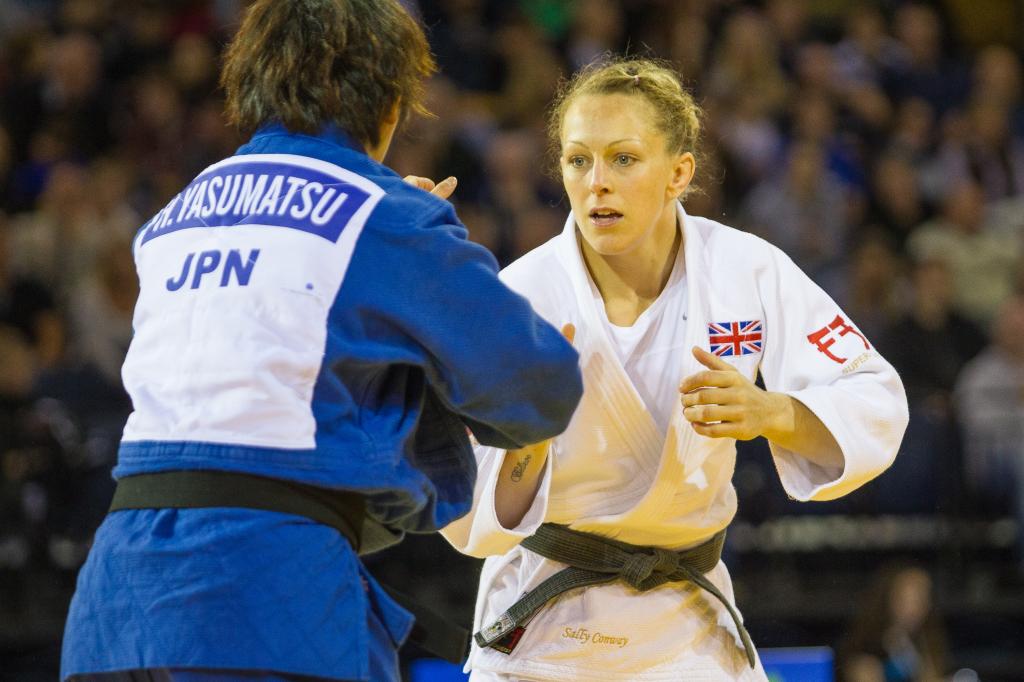 Determined to make up for her disappointment at SECC in July, it was home fighter Sally Conway who led the way for the home crowd taking gold in the -70kg category. Conway had reached the final in typically strong fashion holding Japan’s Huruka Yasumatsu after earlier taking a narrow win on shidos over Alena Eiglova of Czech Republic. The final saw her up against Jenifer Pitzanti and she comfortably beat her Italian opponent, throwing for waza-ari and picking up yuko on the ground to seal the win. 19 year-old British athlete Ebony Drysdale-Daley took fifth place as she picked up hansoku-make against Japanese athlete Haruka Yasumatsu in the bronze medal contest. Also in the category, Commonwealth Games Champion Megan Fletcher fell to a first round defeat to Yasumatsu whilst Germany’s multiple IJF world tour medallist Iljana Marzock could only take bronze, beating Lucie Perrot of France with a waza-ari and yuko in her medal contest.

Gemma Howell continued her good form on her return from injury with the gold medal in the -63kg category. After taking bronze at the recent Grand Prix event in Croatia, she first dispatched Nozomi Hirai of Japan before beating fellow GB athlete Jodie Mullen by ippon to reach the final. There she faced Sweden’s Emma Barkeling with only a single shido separated the pair after four minutes, giving Howell the gold. Amy Livesey and Mullen of GB both lost out in the bronze medal contest after being held by Hirai and thrown for waza-ari by Nadya Bazynski respectively.

Scotland’s Connie Ramsay won bronze at-57kg with a golden score shido win over Italy’s Anna Righetti. Megumi Ishikawi took gold after going a yuko up against Johanna Mueller then throwing her for ippon. Nekoda Davis could only get seventh as she lost by waza-ari to former world bronze medallist Sanne Verhagen of the Netherlands who went on to take bronze.

Sarah Adlington also of Scotland had to settle for bronze in the +78kg category. A semi-final defeat by a yuko to eventual silver medallist Rebecca Ramanich put paid to her hopes of gold but a win by waza-ari against Italian athlete Elisa Marchio gave her the bronze medal. In the final, Ramanich was thrown for ippon by Carolin Weiss of German. Fellow GB star Jodie Myers could only take fifth place as she was held down for ippon in the bronze medal contest by Nodoka Shiraishi from Japan.

Commonwealth champion Natalie Powell lost to Japanese opposition in the shape of eventual Gold medallist Shori Hamada in the -78kg category. The Welsh athlete recovered to take a narrow shido win over Germany’s Julia Tillmanns before losing on shidos to former Olympic Silver medallist Kirsten Theille, also of Germany, in the bronze medal contest for fifth. The final saw Hamada throw Geraldine Mentouopou of France then held her down for ippon to take gold. The other bronze medal went to another German athlete, Marie Branser with a shido win over France’s Marjorie Ulrich.

London 2012 Olympian Kelly Edwards had to settle for fifth at -52kg. She eliminated Ireland’s Lisa Kearney in the repechage with a waza-ari throw separating the pair and then went on to lose by hansoku-make against German athlete Maria Ertl in the bronze medal contest. The final saw Lucile Duport of France defeat Japanese rival Miki Watanabe, scoring an ippon whilst already a waza-ari up. The other bronze medal went to French athlete Delphine Delsalle in a close fought contest.

At -48kg it was gold for Japan as Miri Toda beat Melanie Clemant of France scoring a waza-ari throw followed by two Yukos. Bronze medals both went to France with Scarlet Gabrielli and Aurore Climence taking ippon wins. Commenting on the event, British Judo Chairman Kerrith Brown said: “It has been a fantastic day of judo action and another showcase of top level judo for the Scottish public, off the back of a hugely successful Commonwealth Games. “I’d like to thank everybody from the EJU family, referees, officials, volunteers, staff and fans, along with our partners EventScotland and Glasgow Life for making the event such a success. Next time we step into the arena for judo competition it will be the opening day of the 2015 European Championships and I for one cannot wait!”

Japan won three gold medals as they beat Great Britain to top spot in the medal table at the 2014 Glasgow European Open for Women. Over 2000 judo fans flocked to the Emirates Arena in Scotland’s second city to see some of Europe’s best female athletes battle for the title of Glasgow European Open Champion. The arena played host to 78 competitors from 16 different nations and the strongest showings came from Japan with three gold, one silver and three bronze medals and Great Britain two gold medals and two bronze.

The next judo action taking place in the arena will be the 2015 European Judo Championships for Seniors and Teams on 9-12 April 2015. More information and tickets are available from www.eurojudo2015.com

Watch all the photos from #EOpenGlasgow in our photo gallery: http://www.eju.net/media/?mode=showEvent&id=1851