GOLDEN SHINES FOR GREEK AT LAST 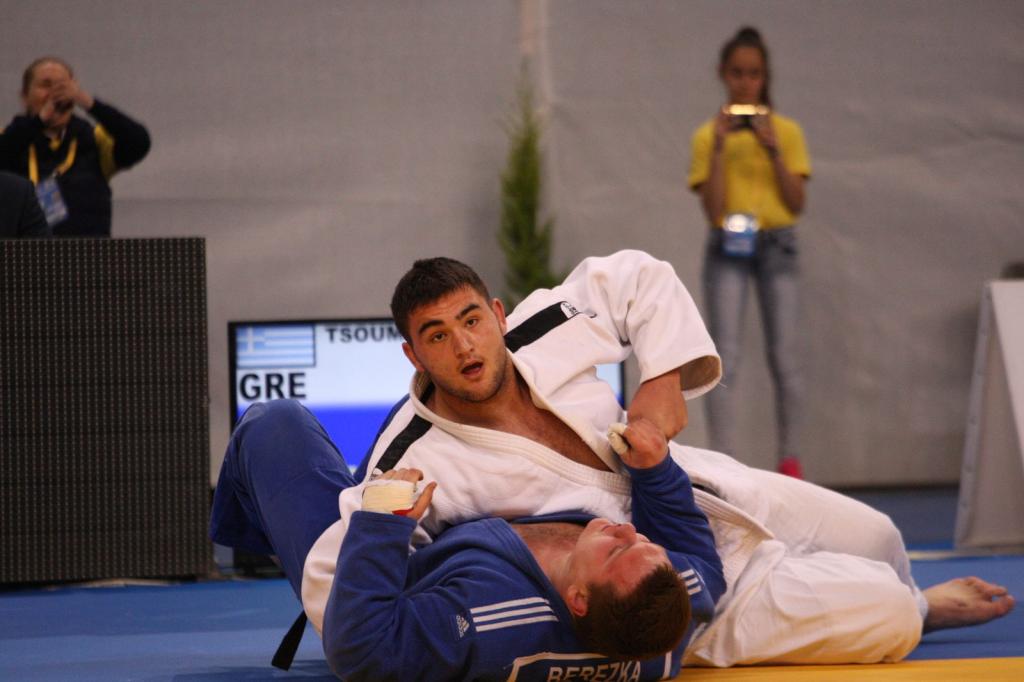 As it was already prominent from day one Turkey won the first place at the Junior European Judo Cup in Athens. The representatives of the neighbor country won 8 gold, 5 silver and 8 bronze medals that brought them easily to the top of the 9th edition of the Iliadis Cup.

The curtain for the Junior EJCup fell with Greece traditionally winning at least one medal as it did in previous events. Mina Agneta RICKEN won the gold medal in category -63kg and Dimitrios TSOUMITAS in category +100kg. The two gold medals brought Greece to the second place of the general classifications before Austria (2-0-0) and Ukraine (1-3-1) that ranked third and fourth respectively.

Ricken and Tsoumitas out of gold

It took only 1 minute for Mina Agneta Ricken to defeat Jovana OBRADOVIC (Serbia) and win the gold medal in category -63kg. For the Greek champion that ranked third in the respective tournament in 2016 and fifth in 2015, the way to the finals and the first place included 3 wins, two waza-ari and one ippon.

“I am excited to have won the gold medal which shows among others that I am constantly improving my performance. It was time my efforts borne fruit after the fifth place in 2015 and the third last year. I really wanted to succeed that is why I trained hard daily giving the best of myself. Watching the Greek athletes all these days I can only say that their level is as always high and they have a lot to give in the future. Ilias Iliadis is a role model for me, an icon, and I feel deeply honored to compete in an event named after him. My future goals is to give my best self in the national games and above all to excel in the European Cup Berlin U21” stated RICKEN.

Dimitrios TSOUMITAS in category +100kg finals eliminated Vladyslav BEREZKA from Ukraine. The Greek champion and bronze medalists of the Cadet European Championships 2015 showed an excellent performance and finished with the first place.

“I had nothing in mind during the final. My success is attributed to the directions of my coach whose directions and strategy lead me to this extremely high level. I did my best in this hard final and I dedicate the gold medal to my parents that have been at my side all these years. My goal is the Olympic Games of 2020 where I hope I can qualify. All Greek athletes had a good performance and we can continue to succeed in the future as we have done in the past”

With the two medals of RICKEN and TSOUMITAS Greece reached the number of 61 medals in the history of Iliadis Cup. 238 judokas from 24 countries have participated in Athens.

The sole representative of the US in the Ano Liosia event, Nefeli PAPADAKIS of Greek origin, won the first place in the -78kg category. Fifth at the Cadet World Championships in 2015, PAPADAKIS won three matches to the way to the finals where she competed with Narjes BEN HMIDA from Tunisia. The Golden score was what determined the final and the American judoka from Chicago literally “stole” the gold medal in shido. In perfect Greek PAPADAKIS stated:

“I was here in the Games of “Athens 2004” watching Ilias Iliadis triumphing at the age of 17. This inspired me and gave me the motive to get involved with Judo and 13 years later, here in my country, to win a gold medal. I competed with a lot of thought and strategy. I believed in my success and I was excited to realize my great potential. It was a great event and I hope to be able to come to Greece to compete in the future. I have competed with Elisavet TELTSIDOU. I have been watching the Greek Judo and what I can say is that all athletes have a high performance”

In two days  the tournament which 238 judokas from 24 countries The EJU Junior Training Camp organized by Olympionikis Ag.I.Rentis will be hosted at Loutraki SportCamp from Monday 27 March to Thursday 30 March 2017. Five countries will participate with 82 athletes.