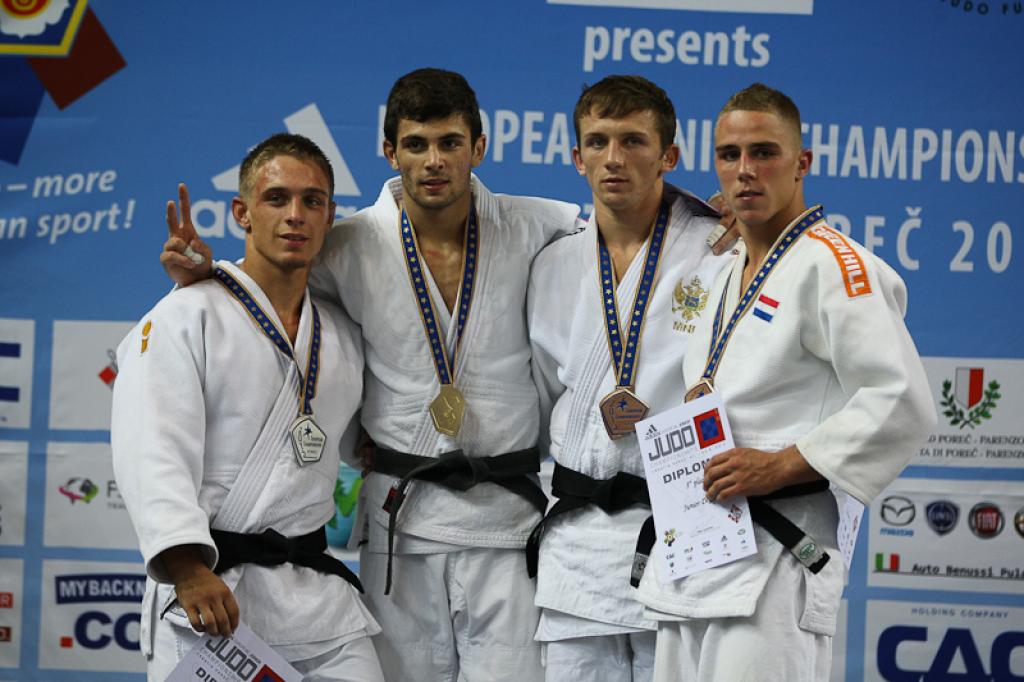 The experienced Greek judoka Georgios Azoidis regained the European title that he won in 2010 in Samokov. In the final he met a tough Dutch opponent in Jordy Bakkes. The Dutchman Bakkes fought clever today, didn’t gave much away and struck at the right time. He had a strong grip but couldn’t get a grip on the tall Greek who led the match after penalties for Bakker and let the clock do the work. The cleverness was now on the side of the Greek who already competed at European Cups and European Senior Championships. He is one of Greece’s hopes for future senior medals and did his job well today.

Nicola Gusic (MNE) needed only 33 second to claim the bronze medal. The youngster from Montenegro defeated Italian Piras in his last fight. An incredible success for Montenegro that was able to win its first European junior Championships medal ever. This year Arso Milic captured a European Cadet medal. This medal is the confirmation of the development of Montenegro judo.

Dutch Junior “Junior Degen” had a great day defeating some of the stronger fighters this year. In the last fight for bronze he threw Beka Vibliani for ippon and claimed the second for The Netherlands in this category.
Georgia’s Beka Vibliani had high hopes of following in the footsteps of his 20 year old team mate Lasha Shavdatuashvili by winning the -66kg category Junior European Championships. That was until he came unstuck in his quarter final against Jordy Bakkes NED. “It was a very hard fight and I gave everything. But he got the decision after golden score and that is the way it goes sometimes” said the Georgian.

The U66kg category is exactly the category where Holland failed to qualify for the Olympic Games.

Azoidis: “It hurt me in Lommel last year when I lost my title, so of course it was on my mind to regain it. And now I am thrilled.”
The silver medallist Bakkes. “I am disappointed in the last match but was very satisfied with this day overall. I threw the number one of the ranking in his first match and felt strong the whole day.”
His compatriot Degen won bronze and had a nasty opponent in his first match in Gusic, it was his toughest match. Furthermore he grew into the tournament. “I only shouldn’t have lost the semi final but for the rest I haven’t been tired to whole day, everything went pretty smooth.”

Dex Elmont was the only to win a European junior title for The Netherlands in this category. Last one to win a medal for Holland U66kg was Jasper de Jong.

If the politicians don’t do it, make Azoidis president, he will regain the winning spirit.