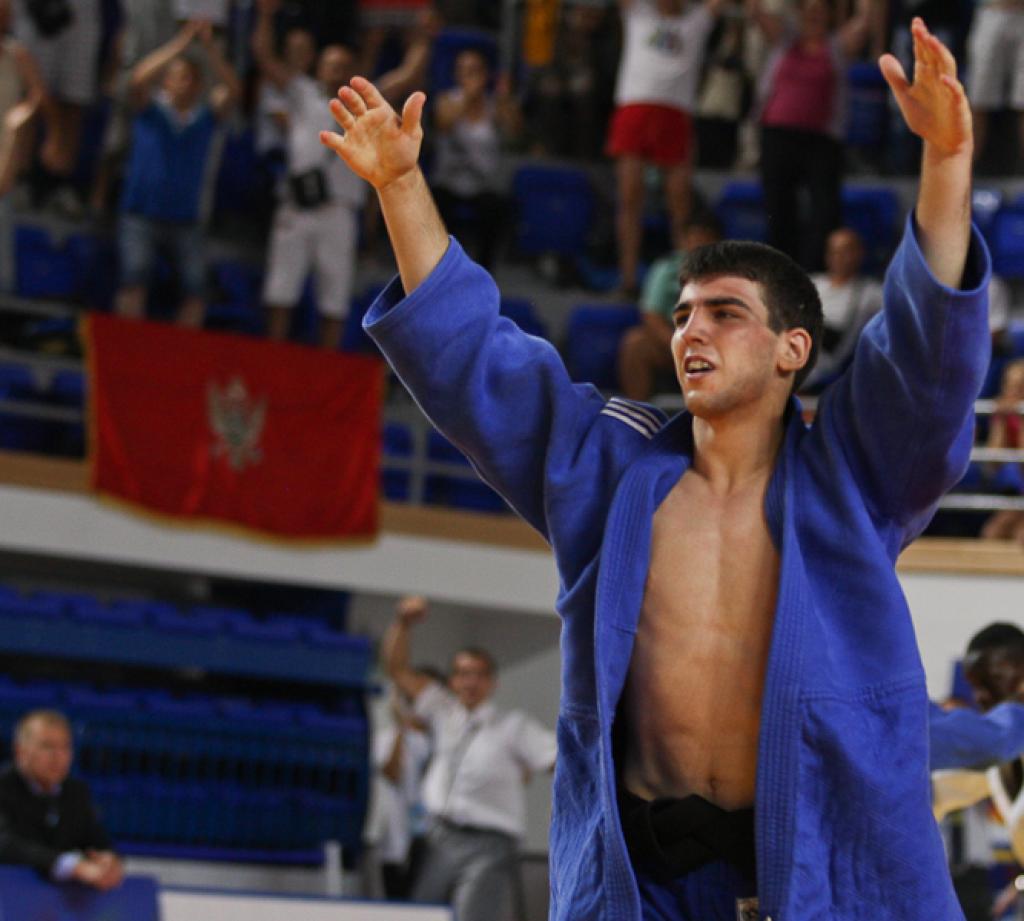 Sensational judo at the second day of the European Championships for Cadets. The conditions are excellent in Montenegro’s sports hall in Bar where the temperature is warm but controlled but the tremendous support of the fans and teammates are heart warming. Also EJU Sports Director Densign White is enthusiastic about the progression made in this age category: “Each year gradually you see progression, each year better judoka, more and new countries challenging the more traditional judo nations. But even this year is a tremendous difference to last year in Malta where it was dominated by Russia and you don’t that this year. They are still strong but you see new nations. Even the smaller nations such as Cyprus and host nation Montenegro have people in the final phase and showed some real good judo. The event is organised well and the level of judo is really high. Also welcome was the women from Georgia who gave a good account of themselves to be present here successfully.”

women U52kg
In the first final of the day in the women’s U52kg category Germany’s Katja Stiebeling was leading the match but kept on going with offensive judo supported by her teammates. She claimed the gold medal in her final against Yuliya Khramova of the Ukraine. Stiebeling won all her five matches. This year she won the European Cup in Zagreb but her opponent Khramova had the same strong reputation winning in Kiev. In the semi final Stiebeling defeated the strong Ilayda Seyis (TUR) who lost in the bronze medal fight against Sarah Harachi of France. Sofia Fiora of Italy claimed the second bronze medal in her match against Khrystsina Yarats (BLR).

Men U66kg
In the men’s final U66kg Strahinja Buncic from Serbia captured the gold medal against Petar Zadro of Bosnia Herzegovina who finished fifth last year. In the golden score Buncic made the difference in a tight final against Zadro. Buncic won five matches in this competitive category and he is the first ever for his country to collect the European title in this age category U17 years. Last year Serbia didn’t have a finalist, in 2010 it was Ana Tuba who won silver. Julijana Savic is the only judoka with a European title. She won the U20 title in 2010.
Zadro made the best ever result for Bosnia ever at a European Cadet Championship. It was ten years ago since Bosnia Herzegovina won a medal, bronze for Amir Topuz in 2002.
In a field of 34 participants Buncic defeated Bachana Bolkvadze in the semi final. The Georgian took the bronze medal against Enrico Atkinson (GBR). Musa Kodzoev won bronze for Russia.

Women U57kg
Romanian Stefania Dobre already won a bronze World Championships medal last year, but on Saturday she added her greatest medal, the European Championships gold medal in Montenegro. In her category U57kg she was the strongest of 30 young women. She won five matches and also dominated the final. After 90 seconds Stefania Dobre heard the bell for her victory controlling Marta Yermolaeva of the Ukraine on the ground.
Romania has a tradition in lightweight categories, although U57 is more a middleweight in this age category. However Dobre had already made her debut at Senior World Cup level this month in Bucharest. In her category Corina Caprioriu is world class, but training with Olympic Champion Alina Dumitru and European Champion Andreea Chitu at such age is a privilege one can only benefit from.
Today everything was good for her. A strong category where she defeated five opponents.
Yermolaeva won the silver medal by her victory over Visnja Rajcic of Croatia. The Croatian youngster lost her last two fights as Dutch Cadet Champion Gaby de By defeating her for bronze.
Nikoletta Balazs won bronze after four exhausting matches including her last victory over Marta Wykupil who had a good tournament as well.

Women U63kg
Alessandro Prosdocimo set the Italian fans on fire after her victory in the category U63kg against Aleksandra Samardzic (BIH). Unfortunately a second loss for Bosnia Herzegovina, but the national anthem sang by the Italian teammates of Prosdocimo was also a moment we could not afford to miss. For this Prosdocimo had to win five fights, a great victory for the girl who’s from the region of Prosecco … and sparkling it was.

For Prosdocimo it is a very special title. Last year she broke her left knee ligament in advance of the European U17 Championships in Cottonera. She did fight there, even for the bronze medal fight, but wasn’t fit enough. In july last year she was operated and came back in January resulting in the European title on Saturday.
In the semi final she defeated Patricija Brolih, one of the favourites in advance as well. The Slovenian won bronze last year in Cottonera (Malta) as well. Now she finished with bronze as well today after her successful fight against another Italian Chiara Carminucci. Samardzic did well and is the second youngest medallist of this championship so far aged 14. Bosnia Herzegovina can be proud on two silver medals as well, even in one day, unique!

Men U73kg
In the men’s category U73kg 15-year old Ruslan Godizov won the gold medal against his compatriot Gamzat Zurgaraev. Both fighters could hardly breath after their fight and couldn’t stand up anymore because of the tough fight. Godizov was the favourite in advance in this division with previous victorious this season at European Cups in Antalya, Tver and Berlin. However it was a tough match against Zurgaraev.

Even more attention from the crowd was for the bronze medal fight between Arso Milic of home nation Montenegro. Milic showed a great fighting spirit but honestly that was applicable in the most competitive category so far this tournament. Great fighters with four medalists who all deserved a gold medal for their great fights. During the day Arso Milic developed as a real magnet for the great home crowd. An unequaled atmosphere during Milic’s fights supporting their hero to a gold medal. But Milic met with the unstoppable Ruslan Godizov in the semi final and lost by Ippon. However in his bronze medal fight he dominated the fight and scored point after point, close to Ippon or a second waza-ari and finished in style by Ippon against Dutch Frank de Wit. He started confident but was surprised by the persistant fighting spirit of Milic who won the second medal ever for his nation at a European Cadet Championships. Tamara Djurdjevac won bronze in 2010 in Teplice (CZE).

Now Milic could get the congratulations of his Federation president Montenegro Judo Federation President Veselin Grbović. The President added proudly: “We hoped for a gold medal, and maybe he was the best seeing the fights but we are extremely proud to win a medal, the second in our history and we are very happy with the organization in general and the public who is so enthusiastic.”

More awards were given to the second bronze medallist Christ Gengoul of France who also showed great judo today and enjoyed the spirit provided by his teammates on the tribune. Yesterday HE was supporting his friends, now he received all French songs and applause. Gengoul couldn’t stop his emotions after winning bronze afterall coming back from his heavy match in the quarter final against Arsu Milic.

EJU Vice President Michal Vachun enjoyed this category which captured his memories today. Vachun added to the quotes of Montenegro president Veselin Grbović: “I so much enjoyed the matches of the home judoka Milic. The way he performed and captured the public was a great promotion for our sport. This age category shows so much emotion and gives everything what judo makes so beautiful. Some of these fighters are tactically close to senior level and have showed their best this week. We have nothing to complain if this is the level we can build out.”

Find all emotions captured in pictures in our media gallery:

Also discover our special reports in You Tube: