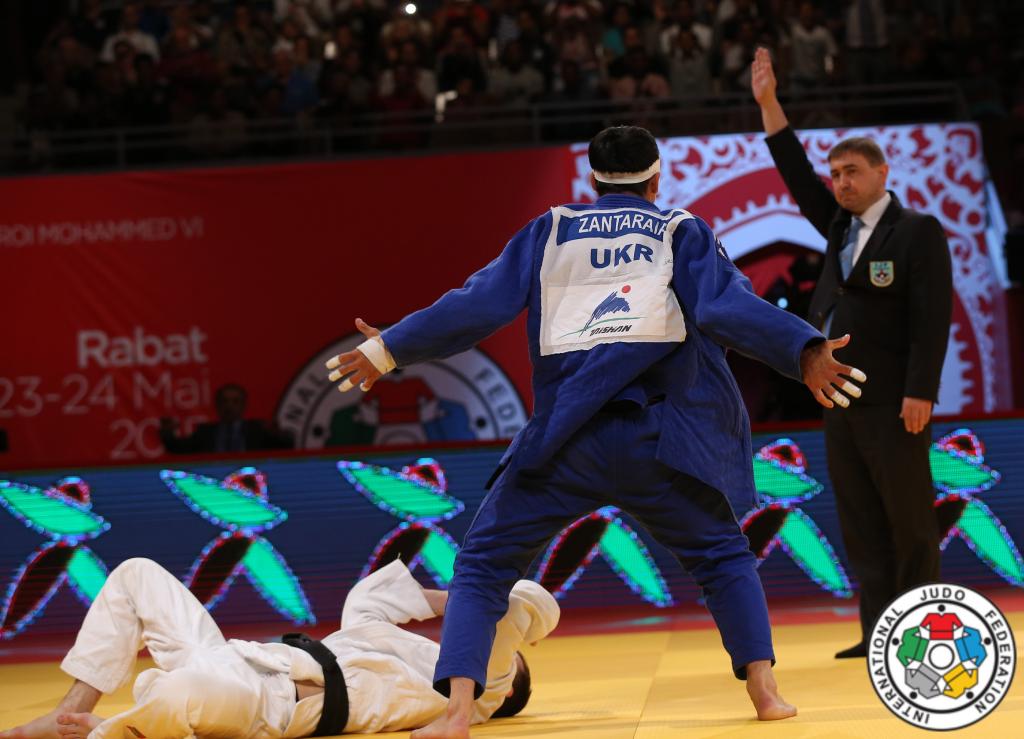 Georgii Zantaraia UKR demonstrated his preparedness for competition at the highest level by winning the gold medal in the -66kg category on the opening day of the IJF World Masters being staged in Rabat, Morocco. Fresh from his attendance at the recent Olympic Training Camp in Antalya last week Zantaraia, the world number three, was part of a high-powered field that featured (in his half) Mongolia’s Davaadorj Tumurkhuleg (2) and in the top half of the draw world number one Mikhail Pulyaev RUS in a total of 16 of the world’s top 20.

In his first contest Zantaraia faced the experienced David Larose FRA. The pair had fought on two previous occasions, Zantaraia winning their last encounter at the Paris Grand Slam in 2014 having lost to the Frenchman at the World Masters in Tyumen in 2013 in their first head-to-head. Larose proved to be the most difficult opponent of the day for Zantaraia and, despite scoring waza ari and yuko, the Ukrainian was disappointed. “I wanted to throw him for ippon. But he was like elastic and always seemed to escape,” said Zantaraia. Next up was Nijat Shikhalizada AZE against whom the Ukrainian has a 3-1 record. Today saw an increase in that gap with a fine win by ippon for Zantaraia. In the semi-final Zantaraia faced Davaadorj who also fell by ippon to give the Ukrainian a place in the final.

Asked about his thoughts on the final Zantaraia said, “I had expected to face Pulyaev. In fact, I went to him in the morning in the warm-up area and told him that I would beat him in the final today.” Things did not quite work out that way for Pulyaev as he lost his semi-final to Dzmitri Shershan BLR. “Before the final I went back to Pulyaev and asked what he had done by losing to Shershan, because I wanted to fight him,” said Zantaraia. In the final Zantaraia threw Shershan with makikomi for ippon to take the gold medal.