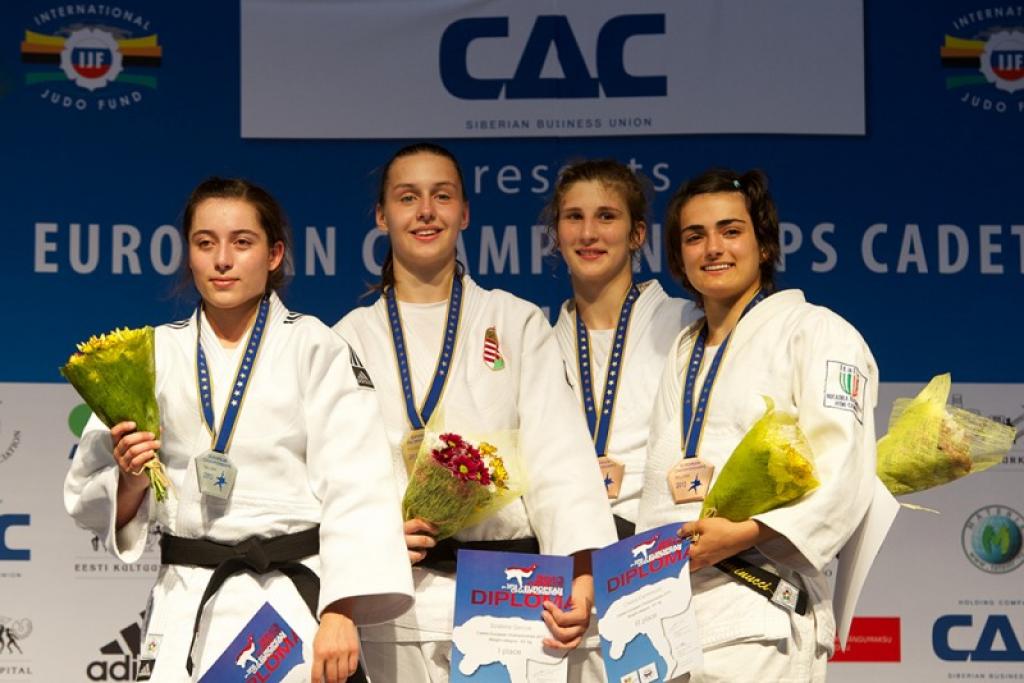 Five different winning nations at the second day of the European Championships for cadets in Tallinn. Historic gold medals as well for Georgia and Kosovo, represented by the IJF.

The first medal of the day was a historic medal for Georgia. Mariam Janashvili won the first ever medal for a woman at any European Championships. Finally the women have started the road to get even with the men in medals. On the first day Georgia already won the first medal, now crowned with gold by Janashvili. In her final she defeated Dutch Fleur de Dekker with convincing and offensive judo which she showed the whole day. Janashvili said: “I was very lucky today. A big thank you to my coaches.”

In the semi final the Georgian defeated Teodora Balasoiu of Romania who won the bronze medal against Emilia Kanerva (FIN). Inbal Shemesh was very happy to win the bronze in her fight against Julie Kemmink of the Netherlands.

Romanian Stefania Dobre won the gold medal in the women’s U57kg category. After the full four medals Dobre had a difference of one yuko in a tough fight against Yuliya Khramova of the Ukraine.  Dobre is coached by Laura Moise who was a European Champion in the seniors in 2000 U48kg. Winner Dobre said to the EJU team: “I am very happy right now. Now I want to go to the Youth Olympics and win.”

Khramova was quite happy with today’s performance: “I did not expect this result, because I usually compete in the -52kg. But the last few times I had a hard time to lose weight and the coaches said I should try to fight in the -57kg, especially since we didn’t have another girl in this category. Now this is a very good result for me and I will continue in this category.”

The bronze medal fights U57kg were good quality fights between Gaby de By (NED) who defeated Adela Szarzecova (CZE) and Jodie Caller who collected the third British bronze medal at this tournament so far after her thriller victory against Sarah Harachi (FRA).

What a strong category for women U63kg. Not based on the number of 23 participants but the quality in strength and positive judo showed today in the great Arena in Tallinn. The numbers one and four of the European ranking list. Where other favourites such as Alessandra Prosdocimo (ITA) and Buga Kovac (CRO) stranded too early, it was Szabina Gercsak who convincingly reached the final. Her opponent, Dutch Lisa Mullenberg, showed refreshing and positive powerful judo during the day. So a power final by the two most impressive ladies of the day. Gercsak was not a surprise but the dealt well with that pressure. She won three European Cups this season and one in the juniors. In the final though Lisa Mullenberg gave her an excellent opposition and after 3.5 minutes no one could tell who should be the winner. Fourteen seconds before the end it was the Hungarian to strike by ippon and she kept the strong expectations alive and the tradition of the strong Hungarian youth. The winners said: “I am just happy now. I felt a little tired in the final.”

Lisa Mullenberg added after the final: “I gave everything today and I don’t know what I could have done better. It was not easy in the final. I want to train harder and to beat Gercsak next time.”

The bronze in this category was for Chiara Carminucci of Italy who came back in the repechage after losing to Mullenberg and defeated surprising Anna Isenko of Poland who really fought a good tournament as well. Patricija Brolih defeated Kovac in the quarter final lost to Mullenberg in the semi. Brolih defeated Lyudmila Drozdova (UKR) in the fight for bronze after all in a tough fight baed on the two penalties for Drozdova. It was Brolih’s third consecutive medal at a Cadet European Championship.

A historic medal as well for Kosovo when Akil Gjakova, who represented the IJF, won the first European medal for his nations in the men’s category. Majlinda Kelmendi is ofcourse Gjakova’s famous compatriot and leader in the women’s senior U52kg category. Now Akil Gjakova steps into the footlights at the age of 17. Gjakova defeated in the final U66kg Elnur Ahmadli of Azerbaijan who was close to the third gold medal for Azerbaijan so far. Gjakova defeated all his six opponents today in Tallinn in the most competitive category with 44 participants. “I competed for the first time at this event and so it was great for me to win today. All my matches were very tough today.”

Koba Mchedlishvili of Georgia defeated Petar Zadro (BIH) in the fight for bronze. Mchedlishvili lost in the quarter final against Strahinja Buncic who won a bronze medal as well after his victory against Pawel Wawrzyczek (POL) but loss against Elnur Ahmadli in the semi final.

The final U73kg started with a smashing uchimata of Ruslan Godizov against Nemanja Majdov (SRB). The number four versus the number four of the Cadet European Rankinglist made a spectacular match for the crowd where Godizov took the initiative and never gave it away. Although he got a yuko for his first uchimata, he picked up another wazari later in the match and was able to control the strong Majdov who fights for Serbia since this year, previously for Bosnia Herzegovina. It was the first gold medal for Russia for young men so far, but still on schedule with last year when Igolnikov was also European Champion and the two other championships came from the heavier categories.

Gold medallist Ruslan Godizov (RUS) said: “I am very happy to have won this championship for the second time. The opponents were tough and I feel that I performed well today. I have a lot of experience, I fought in many events and I also got advice from older competitors. I’m looking up to Wang Ki-Chun (KOR), he is a great judoka. I also admire Tamerlan Tmenov (RUS). He is from my hometown and he has helped me a lot, but I don’t plan to fight in the +100kg” he said with a smile.

The silver medallists Nemanja Majdov (SRB) was strong today: “I felt so strong before the final and I am disappointed to finish second, but on the other hand it is my first medal at the European (Cadet) Championships. I have nine medals from the European Cup, but no medal from the European Championships. Two months ago, I injured a muscle in my back and I wasn’t able to train. So I came here without much training and I was too slow in the final. My friend Ruslan (Godizov) was faster. Now I want to go to the Youth Olympics and the World Cadets Championships and do my best there. I want to thank Ivan Todorov from the Federation and especially my coach and father Ljubusa Majdov, who stayed at home.”

Arso Milic, the number one of the European Ranking list, repeated his stunt of last year for Montenegro to win a medal for the small nation in the Balkan. For this he needed to overcome Dutch Kevin Bakker in his last bronze medal match. Last year Milic won a bronze medal in the city of Bar in his home nation.

The other bronze medal fight was a fast victory by Tamazi Kirakozashvili of Georgia against German Tim Gramkow.

Watch all action in pictures in our media gallery.

Watch the HIGHLIGHTS of the second day.