Honoured guests at World Cup for women in Bucharest 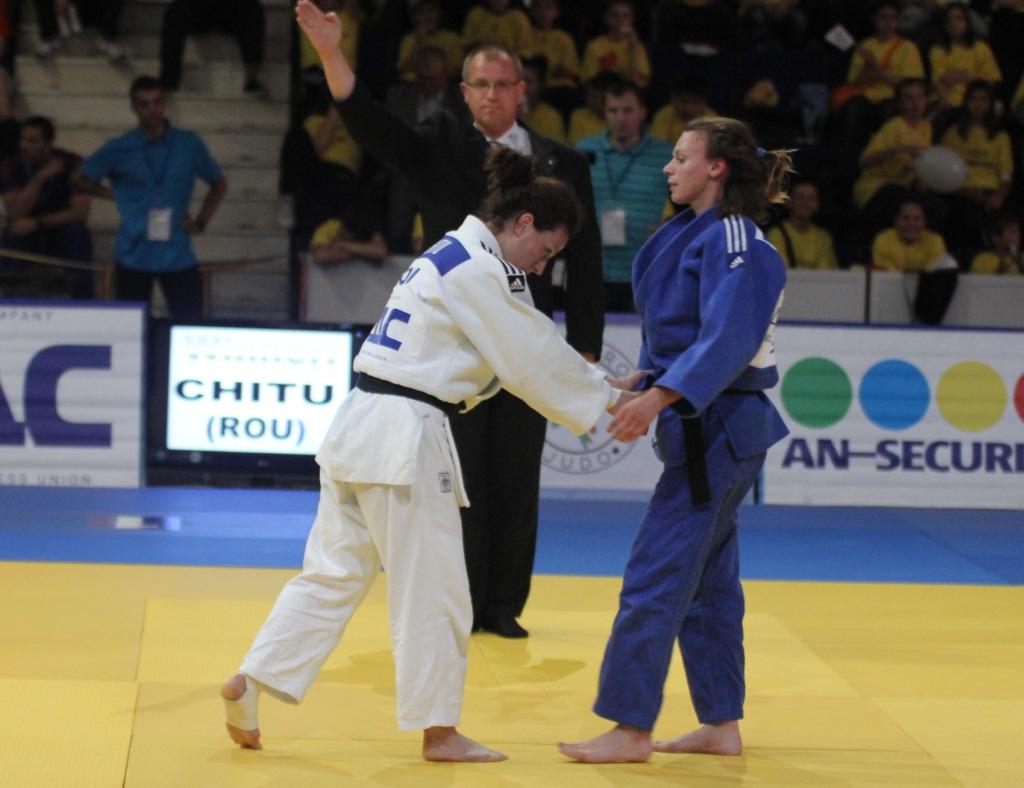 At the World Cup in Bucharest four different countries have won a gold medal. In the final U48kg Romanian could take the first gold.
After 90 seconds in the final U48kg it was Carmen Bogdan (ROU) to take the lead by yuko against Rosseneu. In the last 50 seconds Rosseneu hit back with a great throw scoring wazari and building out to oseikomi. Coached by Neil Adams who motivated Rosseneu over a long time of three years with great success. Belgium have two good judoka again, also Charline van Snick will of course Belgium at the Olympic Games.
2008 Olympic Champion Alina Dumitru doesn’t participate, still injured and taking a small break as preparation for the Olympic Games.

U52kg Andreea Chitu seemed to have troubles with the strong Andreea Catuna as the match continued without score. Both 24 years, but quite a difference in previous performances. Chitu is the European Champion of 2012 in Chelyabinsk and bronze medallist of the World Championships. Chitu is a serious medal candidate for an Olympic medal, but in the end she defeated Catuna who admitted the power of Chitu. The first gold medal for Romania.

The gold medal U57kg for French Automne Pavia was expected. Against Tina Zeltner it wasn’t so easy as on paper. Pavia again needed many minutes, a good practice for the Olympics as picking up many match minutes was one of the goals. Pavia was more stable in the golden score where her Austrian opponent was penalized. However a good performance again for Zeltner who won a silver medal as well at the World Cup in Miami recently in May. She’s just 19 years and at the moment she develops as the successor for Sabrina Filzmoser who is the undisputed number one of Austria in this category.
Gold for Pavia as expected but not yet ready for Olympic medal level, so a good practice.
The biggest upset in the morning session was the loss of Corina Caprioriu (ROU) against Dutch Carla Grol in the last second of her second match. Grol couldn’t convince in the semi final and lost to Marlies Priesner who reached the final against the expected Automne Pavia.

The gold medal U63kg was for British Gemma Howell. She defeated Nina Milosevic in a tough battle where Howell showed a little more initiative. Howell was awarded with gold after the Slovenian talent got penalized in the golden score. In Slovenia Urska Zolnir is the number one but they have many talents in this category. The same for the Netherlands who won two bronze medals by Marit de Gier and Esther Stam. The Dutch won three bronze medals today, also bronze for Carla Grol U57kg.

In advance of the start of the final block Romanian Judo federation president Eduard Doandes awarded special awards for the presidents of the EJU and IJF. EJU President Sergey Soloveychik was present in Bucharest and complimented the federation for the good organisation of the World Cup. “It is not so easy in a time just before the elections in Romania. I wish good solidarity and I wish good results for the participants.” President Soloveychik awarded President Eduard Doandes the EJU gold medal.
IJF President Marius Vizer welcomed all participants and guests to the World Cup and also attended the final block of the first day of the World Cup.

After day one Romania is leading the medal tally with gold a medal for Chitu and the two silver medal for Bogdan and Catuna. Gemma Howell, Automne Pavia and Amelie Rosseneu gave their country gold and a high position in the medal tally. That one will change when Lucie Decosse (U70) and Audrey Tcheumeo (U78) will showcase their skills and form.

Watch photos, review the results and tune in on Sunday again.
https://www.eju.net/results