HOOFDDORP WAS BLENDED WITH HISTORICAL MOMENTS 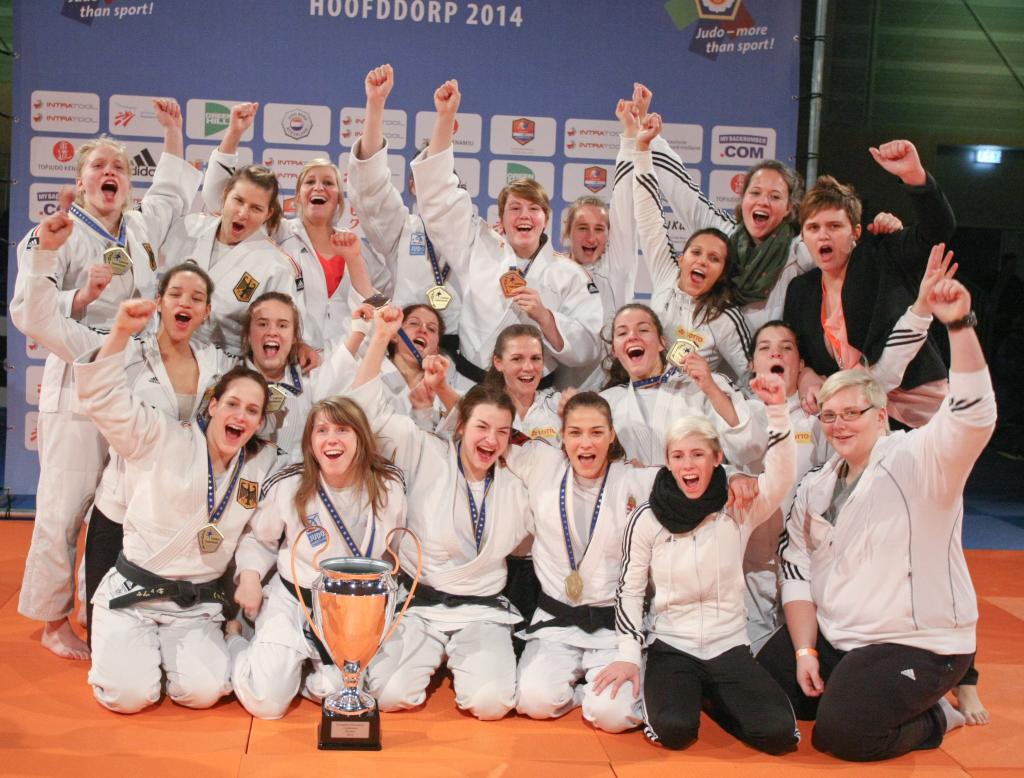 The atmosphere was ecstatic in the Sportcomlpex KWA Arena in Hoofddorp at the stage of the semi-finals already when Kenamju Haarlem (NED) and Sagaredjo FF Superstars (GEO) were head to head until the last match up between of Henk Grol and Levani Matiashvili where the Dutch judoka executed a breath-taking ko-soto-gake to take his team straight into the final. Whilst there was a big battle on one mat, Fighter Tbilisi did a clean sweep in the semi-final against Red Star (SRB) on the other mat.

By the final clash of the men division, the crowed was on fire. The world famous Georgian team was in style, and by the end of the match up the score board was flashing with 4:1. If that wasn’t enough, Fighter Tbilisi are also the first ever Georgian team to win the ECC title.
The Vice-president of the Georgian Judo Federation, Mamuka Kiziashvili lead the team throughout today’s performance and was absolutely delighted with the final results: “Today was absolutely fantastic because the Georgian power is always the best and today it was well displayed. Our results are fantastic. I would highlight two players from today, Zebeda Rekhviashvili and Avtandil Tchrikishvili were both fantastic today.”
Plans for the Golden League next year? “I think we can make the same results… I hope so.” – he added.

History was made by both bronze medal winners as neither Portugal or Serbia ever won European Club Championship medals, however Sporting (POR) and Red Star (SRB) changed that.

It did not stop there and then as history was also made by Judo-Sportverein Speyer (GER) who became the first ever German women team to win an ECC title. The Germans made it look fairly easy against number one seeded Cortaillod with the final score of 4:1 on their board. Head coach, Nadine Lauteuschlafer was thrilled with the victory and admitted next year in the Golden League they will not aim for less than the gold medal.
World silver and bronze medallist, Erica Miranda, who represents Brazil on the daily basis, has highlighted her European experience after winning the silver medal as part of team Cortaillod: “My team in Brazil is the winner of our league back home three times in a row so I get used to team events, however today was different than any other occasions. I have a great team here and I had an amazing, the organization was absolutely fantastic and we might not win today but next year we are in the Golden League and there will be gold for us, only gold.”

Esther Stam had the final say on who is taking home the bronze medal home today after throwing Iliana Marzok for Ippon. Esther represents Georgia on international individual events; however Kenjamu Haarlem is where she has been training for years. Esther expressed her feelings after the winning contest: “Throwing the decision making score was an amazing feeling, especially front of this amazing spectators… I knew it was a very important fight as Marzok is a very strong opponent and this makes it extra special.”

Kenamju Haarlem women team head coach, Benito Maij recaps the day: “The main target was to get into the final block. I told the girls it is a one big rollercoaster; we have a very successful and high spirit. After our loss in the quarters it was like there has been a bomb explosion as the team was down but we managed to get the girls back in the game. I am pleased with our performance today. I can’t wait for the Golden League next year but first we are going to celebrate our victory of today.”

Alongside the hosting team, Sainte Genevieve Sports was also celebrating their bronze medal triumph. And to end an eventful day in Hoofddrop, Dutch judo legend, Dennis van der Geest quoted the following: “I was very happy at the end we won a bronze and a silver medal which was good. Besides that, I have seen a high level of judo competition, I saw thousands of people who love judo and created a very good atmosphere closed by the contest area and I think that’s the way judo should be promoted. Today you could see the tension, the passion, the power and great techniques. I think today went really well, we really enjoyed it.”

The next location for the 2015 ECC yet to be confirmed, however the following teams are guaranteed a spot in the 2015 Golden League: