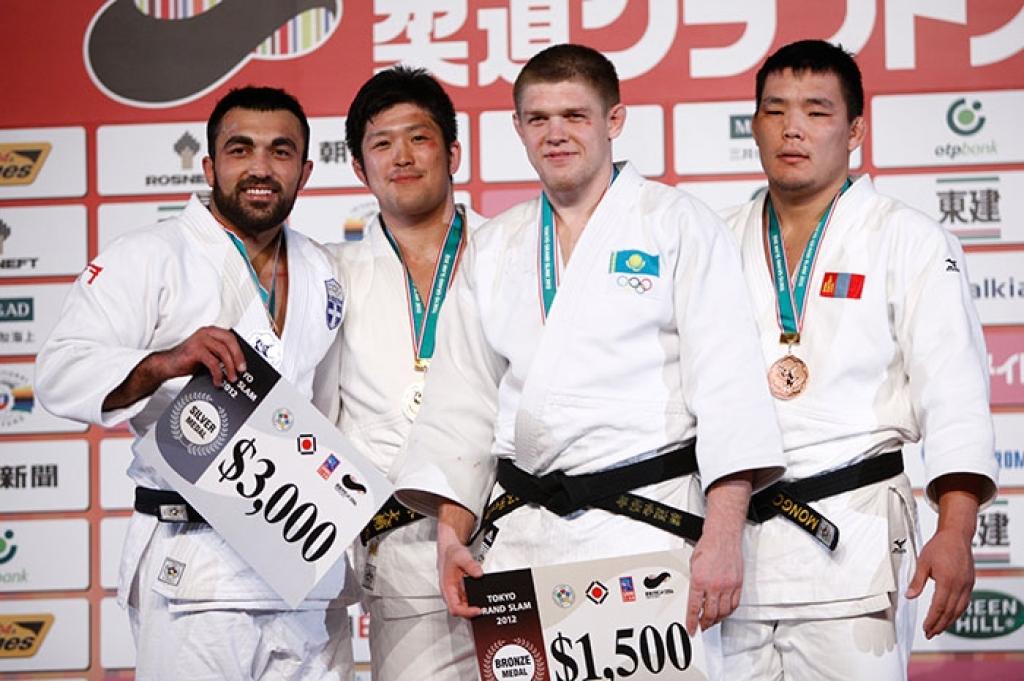 At the last day of the Grand Slam of Tokyo Greek idol Ilias Iliadis came close to a third victory at the Grand Slam in Tokyo. This occasion he fought in the men’s U100kg weightclass but lost his final fight against Daisuke Kobayashi of Japan.

It was a long run for Iliadis to reach the final, having to enter several times into the golden score during the preliminary rounds of the competition. After 3 minutes and a half, both athletes received a shido as they were spending most of the time looking for gripping. But this fight was too much for the Greek Champion. In the last minute, KOBAYASHI engaged a percussive uchi-mata, which first looked coming from too far, but he could ensure the gripping and controlled Iliadis until the end to score a beautiful ippon.

In the -100kg category, the performance of the Olympic and World Champion, Ilias Iliadis was particularly awaited, as it is not his regular weight class (-90kg). Looking a bit tired, he managed to go through the preliminaries, winning all his fights by ippon against ASANUMA Takumi (JPN), Luciano CORREA (BRA) and the French Thierry FABRE, World bronze medallist in 2010, here in Tokyo. The combat against FABRE was the most difficult for the Greek champion, as he had to go into the golden score to finally throw the French for ippon after only a few seconds. In the semifinal he was opposed to the 2009 World Champion of the category, Maxim RAKOV (KAZ), who after a few seconds received a first penalty for passivity. Largely dominated by the strong gripping of the Greek, RAKOV looked armless and was only waiting for possible counterattacks. At the end of the regular time nothing was scored and for the second time of the day, Iliadis entered the golden score period. The first very strong attack of RAKOV came 40 seconds before the end of the extra time but for no score, and the decision was finally made by the referees, who unanimously designated Iliadis as the winner of the semifinal.

A second European medal was claimed by French heavyweight BONVOISIN, Jean-Sebastien (FRA). He keeps on developing well, but couldn’t prevent the later winner KIM, Sung-Min (KOR) to beat him in the semi final. BONVOISIN (FRA), beat the London Bronze medallist, Andreas TOELZER (GER), in the golden score. In the semifinal, KIM Sung-Min  came with the first attack, who quickly engaged a shoulder movement for no score. Only a few seconds later, the Korean dived under the center of gravity of the French, for a kata-guruma (without the leg) for ippon, so BONVOISIN was sent to the bronze platform.

KIM defeated Brazilian Rafael SILVA (BRA)  in the final. KIM launched a first powerful o-soto-gari for waza-ari, which he immediately followed with an immobilization for ippon concluding an impressive series of victories obtained throughout the day.

In the women’s division no European medals, which brings the total to nine medals for Europe. Just one gold medal by Dutch Linda Bolder on Saturday.

Next week is the World Cup of Korea.

New refereeing rules to be released

The next IJF events will be held in Paris, on the 9th and 10th of February, 2013. On that occasion the new refereeing and organizational rules will be applied for the first time. This year’s Tokyo Grand Slam gave the occasion to the IJF Executive Committee and the IJF experts to take the final decisions which will be released next week.

You can download the latest IJF World Ranking in our service links in our homepage.