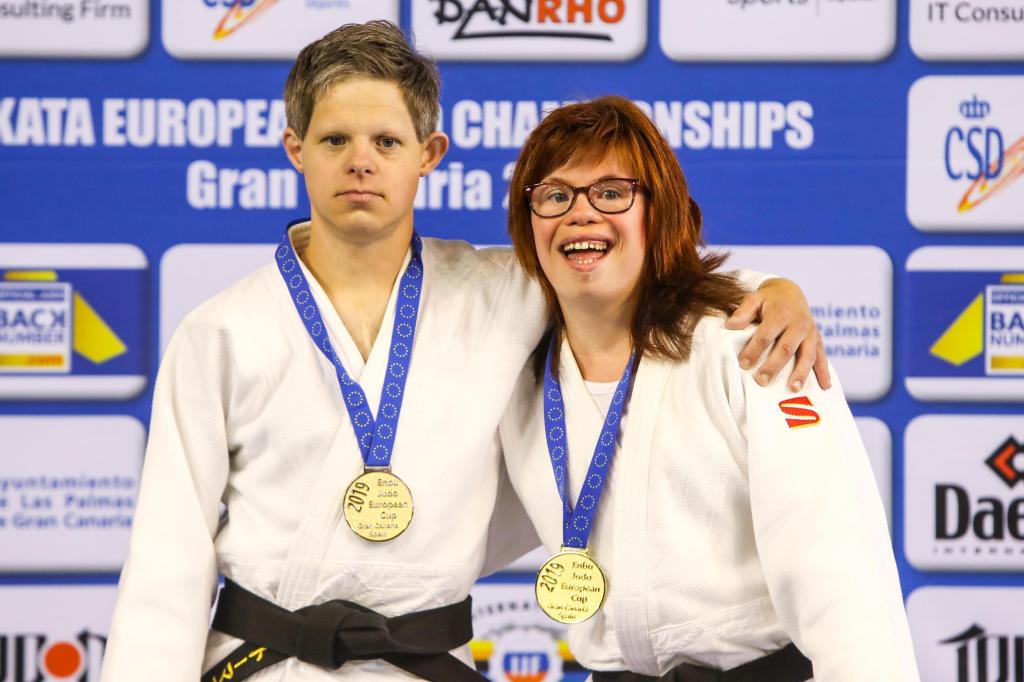 During the Kata European Championships in Gran Canaria, there was a special event to behold.

Earlier this summer, the EJU introduced a new seminar to the Judo Festival in Poreč, highlighting the reach that judo has across the wider, special needs community. With an ongoing interest in special needs judo, it was yet another opportunity for those judoka to display their abilities, only this time it would be on the competitive European stage. A demonstration was organised by Dutch judoka, with Tycho VAN DER WERFF, a specialist in education and coaching of special needs athletes.

Among those demonstrating the precise Kata in their respective categories, welcomed in to the hall were two incredible couples, Sanne SIMONS and Thomas SCHEPEN and Cees ROEST and Janienke ROELFSEMA, both demonstrating Nage-No-Kata.

SIMONS and SCHEPEN both have Down’s Syndrome which wouldn’t usually be associated with the movements of Kata, however the audience watched on in amazement as the pair went through three series of Nage-No-Kata. The crowd were so impressed that the applause for the first pair continued for some time, the respect from their fellow judoka evident.

A hard act to follow, ROEST and ROELFSEMA stepped on the tatami. With great anticipation, the crowd watched on as the Nage-No-Kata techniques were adapted for ROEST, following an incident becoming paraplegic. This means that there is an impairment to functionality, controlling the lower half of the body. Through love of the sport and a determination to prove that judo is for all, the actions were executed perfectly and once again a standing ovation was delivered.

VAN DER WERFF allowed us, in Poreč, to see that although there is a stigma attached to those with special needs, the key to breaking down these barriers is integration. The Festival was a fantastic opportunity for this as the attendants ranged from families to Olympic and World Champions. Now the combining of tournaments will hopefully eventually lead to the breakdown of barriers between adaptive and main stream judo. VAN DER WERFF also reported on this brilliant event hosted by the Royal Spanish Judo Federation,

It is fantastic that an international organisation like EJU have the vision to understand this and the courage to take this historic step is a great leap forward, and SNJF are greatly honoured to have been able to support this process. We thank EJU for this great opportunity and are looking forward to future cooperation.