Impressive win by Huysuz at World Cup in Tallinn 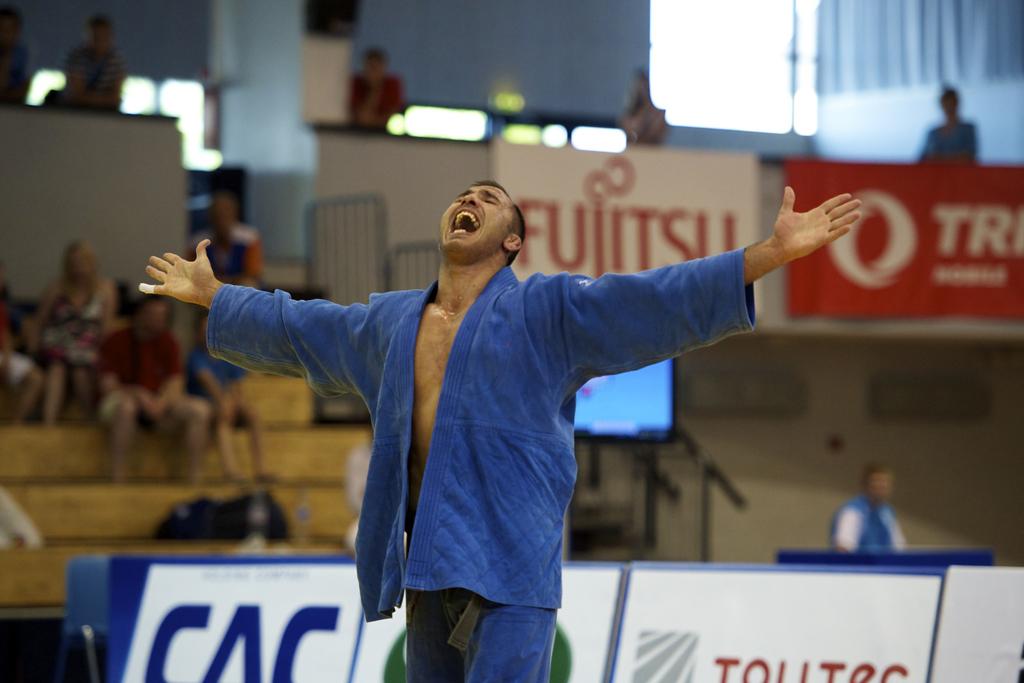 Fantastic performances today in the sports hall in Tallinn by Turkey and Israel both winning two medals and both win gold. At the World Cup in Estonia both countries outperformed but the most unusual and surprising win was the victory of good old Sezer Huysuz from Turkey. The 33-year old fighter defeated the favourite Christopher Voelk who is in a good shape but didn’t show his best judo today after being surprised in the semi final against Huysuz. Voelk finished fifth and Huysuz defeated the impressive Israelian Iosef Palelashvili who also had a great day, but couldn’t finish it in the final. Based on his career development over the last two years Palelashvili should win. Sezer Huysuz was surprised in the last minute of the match with a great ippon taking the gold U73kg.
Giovanni Di Cristo surprised Christopher Voelk once more and took the only medal for Italy as at the same time Marco Maddaloni lost to the second Turkish participant Hasan Yilmaz. Knowing Turkey also has European medalist Hasan Vanlioglu in this category we can say that also the men are starting to move up to a level where they have good chances to qualify for the Olympic Games.
Huysuz celebrated his win with passion. He became the oldest ever winner of an international event for Turkey. At the age of 33 years, Huysuz is equal with bronze medallists Nese Senoy in 2007 in Minsk, and Huseyin Ozkan in 2005 at the Super World Cup in Hamburg, both also 33 years young. Sensoy was the last to win at the age of 32 in 2006 in Baku.

In the category U60kg Azerbaijan was dominant taking two medals. Although we are used to good Azerbaijan results in this category, it was good to see that Ilgar Mushkiyev took the gold in the final against Andrejs Magers. Mushkiyev has showed the best judo in Tallinn and was a good winner. In the final he got quite some opposition by Andrejs Magers. Although Mushkiyev led from the start by waza-zari, it was Magers to neutralize Mushkiyev, but the youngster from Latvia couldn’t prevent Mushkiyev from winning a second time against Magers. In Tbilisi this year Mushkiyev had beaten Magers for the first time at the World Cup in January. That World Cup was won by Mushkiyev and Magers finished third, so he made a good progression today, especially in his fight against Valtteri Jokinen who led this semi final. Magers came back in the match and reached the final. The two Finnish semi finalists Jokinen and Juho Reinvall were the most technical today with good groundwork but failed to win their last two matches.
James Millar (GBR) could use a medal again and won the bronze via the repechage after losing to Reinvall in his second match. Nijat Shikhalizada won bronze today in his convincing bronze match against Reinvall.

One of the most impressive fighters today was Golan Pollack from Israel. He won the gold U66kg by winning all five matches with good judo, great points and refreshing attacks daring to take risk. In the final he defeated Maxim Kuznetsov by a straight ippon. Only in his semi final Jasper De Jong seemed to have found the solution to neutralize the Israelian. Pollack didn’t come to his usual attacks, but all of a sudden in the last seconds of the fight De Jong stepped into the trap of Gollack by speeding up and walking into a smashing seoi nage.
De Jong took the bronze after an exhausting match against Niko Tapio Niemela, the third Fin to finish fifth today. De Jong was awarded the win after the golden score didn’t deliver any point in an equal fight were De Jong seemed to be a bit more convincing attitude without scoring.
Sergiy Drebot (UKR) won bronze in his fight against Tarlan Karimov (AZE), the silver medalist of this year’s European Championships in Istanbul.

Tomorrow you can again enjoy our broadcast and live results from the spot. Tune in here:

Later tonight you can expect more pictures in our Media Gallery.