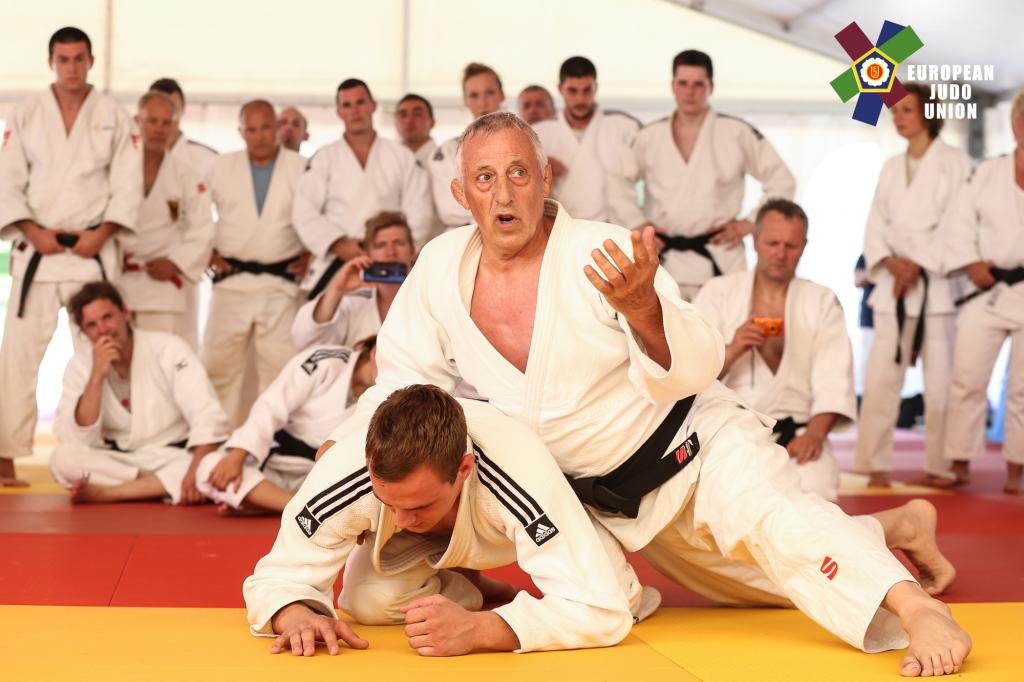 Today afternoon, it was time for some Newaza work with EJU Expert, Mr. Jean Pierre GIBERT, who led the second session of the Improve Your Club Seminar. Before commencing with the seminar, a minute silence was demonstrated for members of the Croatian Judo Federation (CJF) whom lost their life since last years’ Judo Festival. The group paid their respect for the following individuals: Andrija HABULIN – Founder and key person in history of CJF; Mirko PARCINA – 7.DAN of CJF; Dragomir TAVRA – National Team Coach as well as Coach of first Croatian Olympians and European Senior Medallists; Igor FISTONIC – Former Croatian Judoka.

The session focused on different elements of Newaza. Primarily, important basic skills were taught by Mr. Gilbert, before demonstrating different techniques. An interview was carried out following his tutorial.

Why did you chose to deliver a seminar on Newaza?

“Before coming here, I was told I can do anything I want. I chose to focus on Newaza because it is really important as now the referees let the athletes to work longer on the ground. Therefore it is very important that coaches are well aware of the connection between Tachi waza and Newaza. This is a great opportunity to score.”

Any particular reason you favour Newaza?

“Well, first of all when I was an athlete I had only one technique I could throw with – he laughs. I was not explosive neither powerful as a competitor. At the time, I have met some outstanding individuals who were excellent in Newaza and I started to learn from them to master my ground work skills to win. I think, especially now, Newaza is really important for instance to avoid Golden Score. If the athletes know how to do transition, they can prevent going into extra time.”

Do you agree that Tachi waza has still somehow more devotion than Newaza?

“I would say so, but the reason being is that there are a lot of judoka who are very good in Tachi waza and normally they don’t have to progress into Newaza. Yet, it is very important and I believe they should be able to pay attention to it too. They should be able continue with transition because once your opponent finds the Kaeshi waza to your technique, being good in Newaza can be a great, very useful addition to your judo. As vitally as to defeat your opponent.”

How is Porec for you this year so far?

“It is the third time for me at the Judo Festival and I think it is very special event because every single time there are new teams, different people, youngsters and elders, so it is always a great pleasure to be here.”