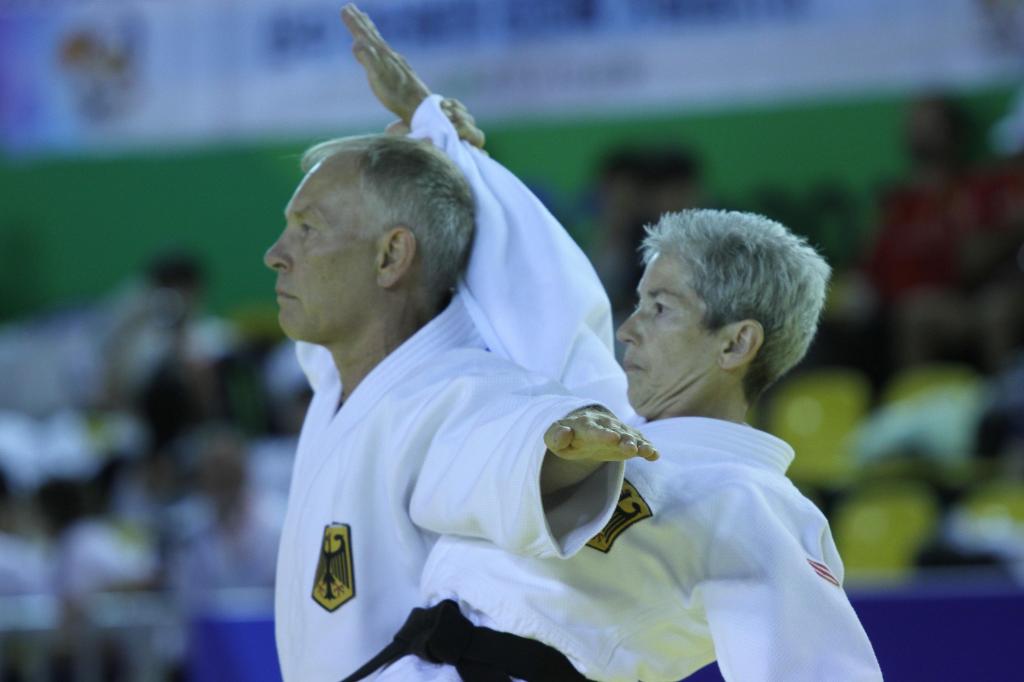 Wolfgang Dax-Romswinkel und Ulla Loosen have been, for many years, a very successful couple in Kata. This year both won the Kata European Judo Championships in Gran Canaria and also the World title in Korea. We had the chance to speak with the successful german couple.

How did it start with you both as a competition couple?

We have known eachother for 20 years and met at a kata seminar. We had more and more contact since 2006. At the beginning of 2007 we decided to participate together at the Kata Championships. Therefore we began to train together.

This gold medal win wasn’t your first one, right?

How did you prepare for the competition?

This year the time between the European and World Championships was much shorter than usual. In between were just the summer holidays. Besides that fact, our preparation was the same as every year. After a championships, especially after the European or World Championships we try to identify details and analyse where we still can improve. So it was also this year, we could increase special things which surely helped us to defend our title.

How do you both manage to train together?

We are living 130 km apart and are both employed. So we only can train together on the weekend. During the week we train independent, everyone for himself. We both attach importance to varied judo lessons which includes Randori. We realised that the development of our Kata highly profits from a comprehensive judo training – and reverse. In addition comes a supplementary physical preparation.

How is your daily routine during your competition day?

On our competition day – and preferably already the day before – we try to be very early in the venue. We really want to spend as much time as possible on the competition tatami for warming up, and to get used to that tatami. If possible we do our complete Kata two to three times on this competition mat. Then Ulle has to determine the rhythm and the tempo. That is why she is retrying it again and again the beginning of the Kata on her own. Then she got the feeling of the right speed.

And Wolfgang primarily has to react relaxed, fluently and precise. And to that he has to keep his head clear.

Sometimes some distraction can be helpful. In any case fast and dynamic technical exercises beyond Ju-no-Kata. So you get the built-up adrenaline out of your muscles.

What are you then doing just before your performance?

The last stage begins about 45 minutes before our Kata with dress up the Judogi we wear at the competition. Since that moment we try to relax without losing the concentration.  The feeling in the stage before needs to stay until the beginning. But that isn’t always easy.

What do you do better than other pairs?

To be honest that question we just can’t give an answer. Also because of respect towards our opponents. But we could highlight two things which are very important. In any case we try to avoid to be prisoned in familiar routines. Then we just would unwind our Kata loveless. What we want to achieve is to bring our Kata to life. Also we don’t want to give our Kata with an artificial aesthetics a special external effect. Instead we concentrate on a precise technique that ideally has got a flow of movement. The from the outside noticed aesthetics is not our goal but a result of our successful technique.

To be honest that question we just can’t give an answer, because of respect towards our opponents. But we could highlight two things which are very important. In any case we try to avoid to be prisoned in familiar routines and to demonstrate our Kate dispassionately. We want to show every Kata like it is our first one. We don’t want that our Kata looks artificial. Instead we concentrate on a precise technique that ideally has got a flow of movement. The perceived aesthetic is the result of the successful interaction of each technique.