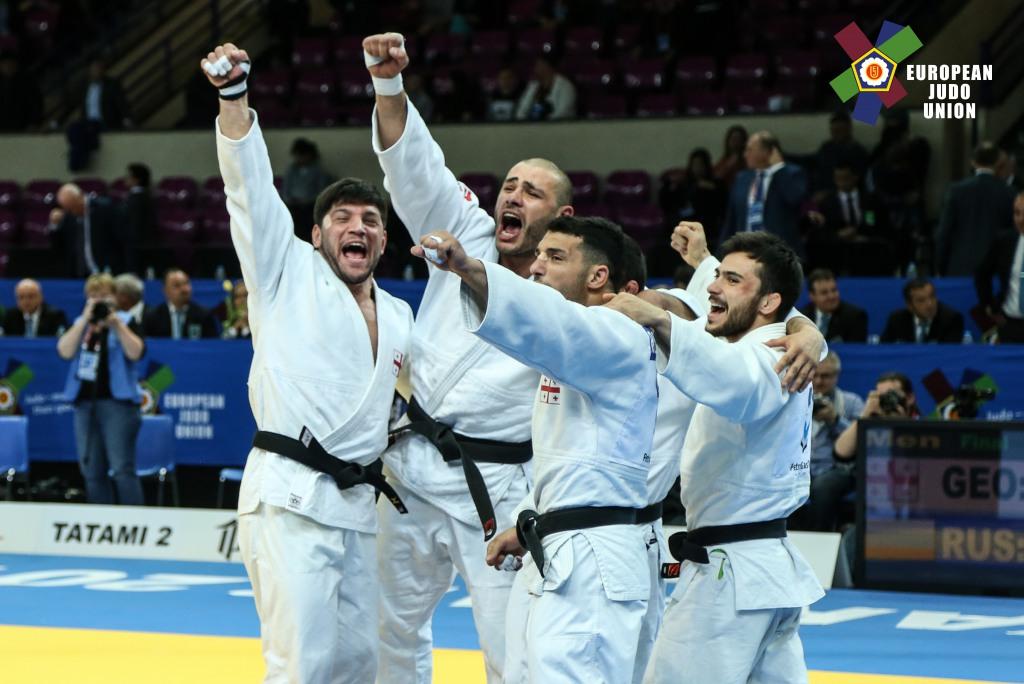 Day four of competition at the European championships in Warsaw ended with Georgia triumphant in retaining the Men’s team title. Despite the absence of Georgian talisman Varlam LIPARTELIANI, Avtandil TCHRIKISHVILI and Nugzari TATALASHVILI, the Georgians were nevertheless able to field a team strong enough to withstand the challenge posed by Europe’s best.

The Georgians began with a 4-1 win against Italy in round one and then a quarter final win against Serbia by the same 4-1 margin. Ukraine offered up a stronger challenge in the semi final when Vazha MARGVELASHVILI (-66kg) and an out of sorts Zebeda REKHVIASHVILI (-81kg) lost their contests to leave the Georgians trailing by 2-1. Beka GVINIASHVILI (-90kg) was replaced by Ushangi MARGIANI to face Vadym SYNYAVSKY (UKR) and it proved a good call from the Georgians as after 45 seconds Margiani scored waza ari with sode tsuri komi goshi. A minute later, a nicely timed piece of te waza brought an ippon to end the contest. With the score tied at 2-2 European champion at +100kg Guram TUSHISHVILI (GEO) stepped up to take on Iakviv KHAMMO (UKR) in the deciding contest. But a single waza ari scored with te waza by Tushishvili within the first minute was enough to take the Georgians into the final.

Up against Georgia in the final was number two seed Russia who had defeated Turkey (4-1), Netherlands (4-1) and France (5-0) along the way. Instead of Abdula ABDULZHALILOV the Russians decided to opt for Anzaur ARDANOV to face Vazha Margvelashvili. The contest was scoreless in normal time, but after only 14 seconds of golden score Margvelashvili caught Ardanov with ko soto gari for waza ari to give the Georgians a lead of 1-0. Next up was Lasha SHAVDATUASHVILI (GEO) who had not been at his best. And so it proved when after two minutes Shavdatuashvili attempted a right o uchi gari that was countered with left ko soto gake for ippon by Uali KURSHEV (RUS) to level the score at 1-1. Zebeda Rekhviashvili faced Stanislav SEMENOV (RUS) and the contest went into golden score where this time it was the turn of the Georgian Rekhviashvili to be thrown after 14 seconds with de ashi barai for waza ari giving Russia a 2-1 lead. Beka Gviniashvili was now required to save the match as he faced Magomed MAGOMEDOV (RUS). Two minutes into the contest it was Magomedov who ran on to a right sided uchi mata from Gviniashvili that scored waza ari and from which Gviniashvili secured yoko shio gatame for ippon bringing the score level at 2-2. It was left up to heavyweights Guram Tushishvili and Renat SAIDOV (RUS) to settle the destination of the team title. Tushishvili’s form, that had brought him the European individual heavyweight title the previous day, proved too good for Saidov who after a minute and a half was thrown beautifully with a low left sided morote seoi nage for ippon giving the Georgians the title.

With regard to the bronze medals, Ukraine ended up 5-0 winners over Azerbaijan and France lost to Hungary 5-0 in identical circumstances. 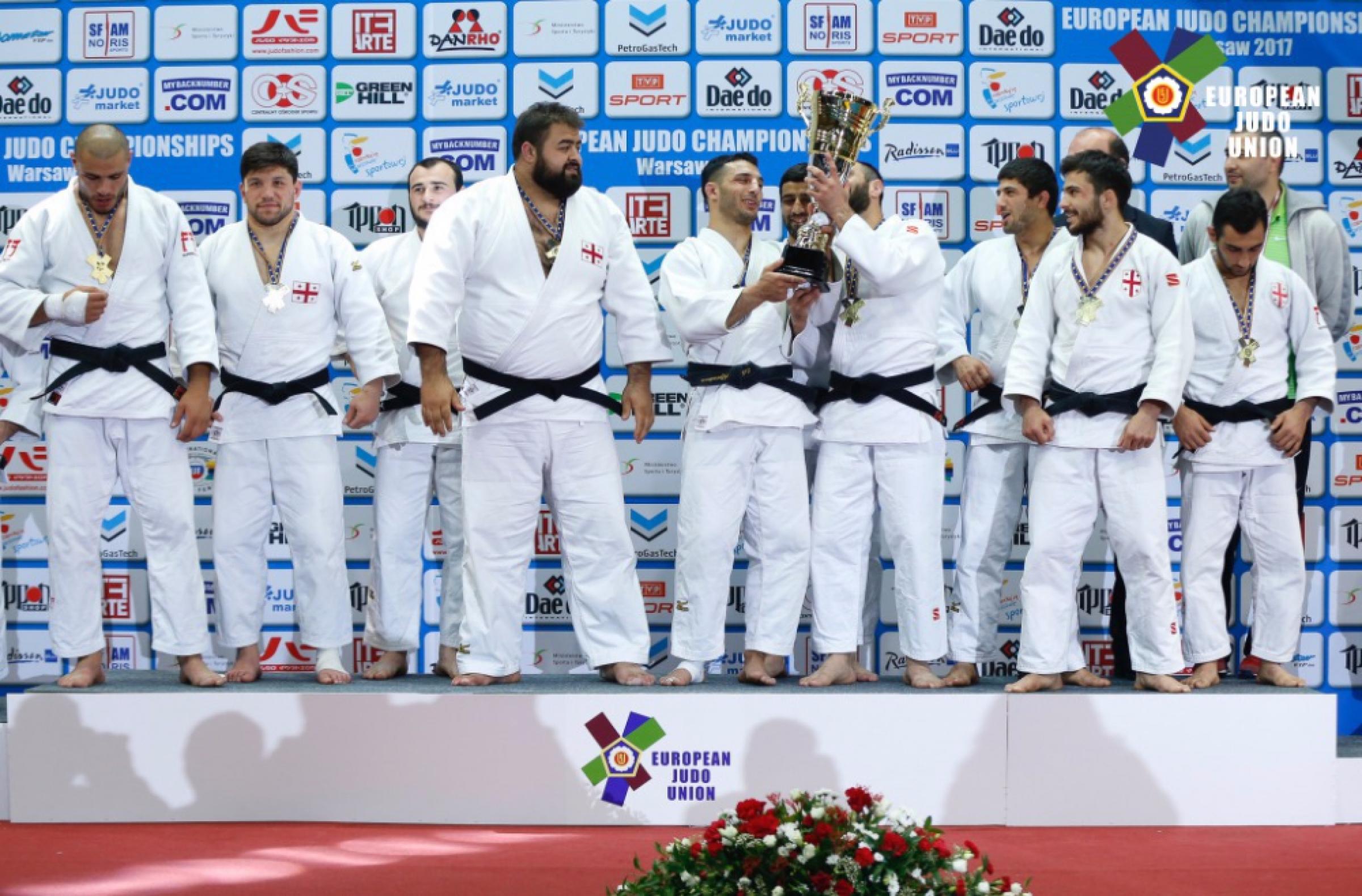 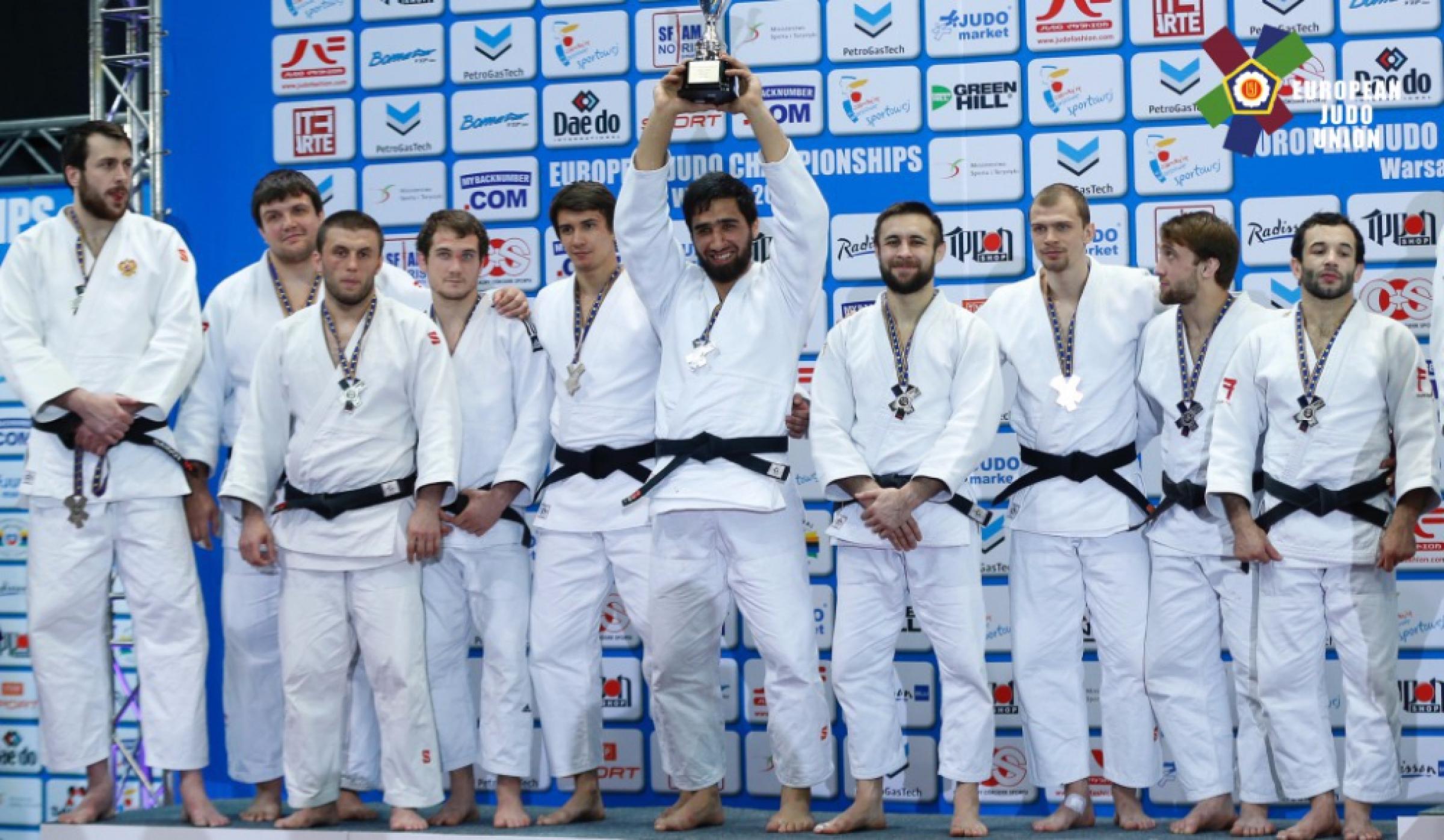 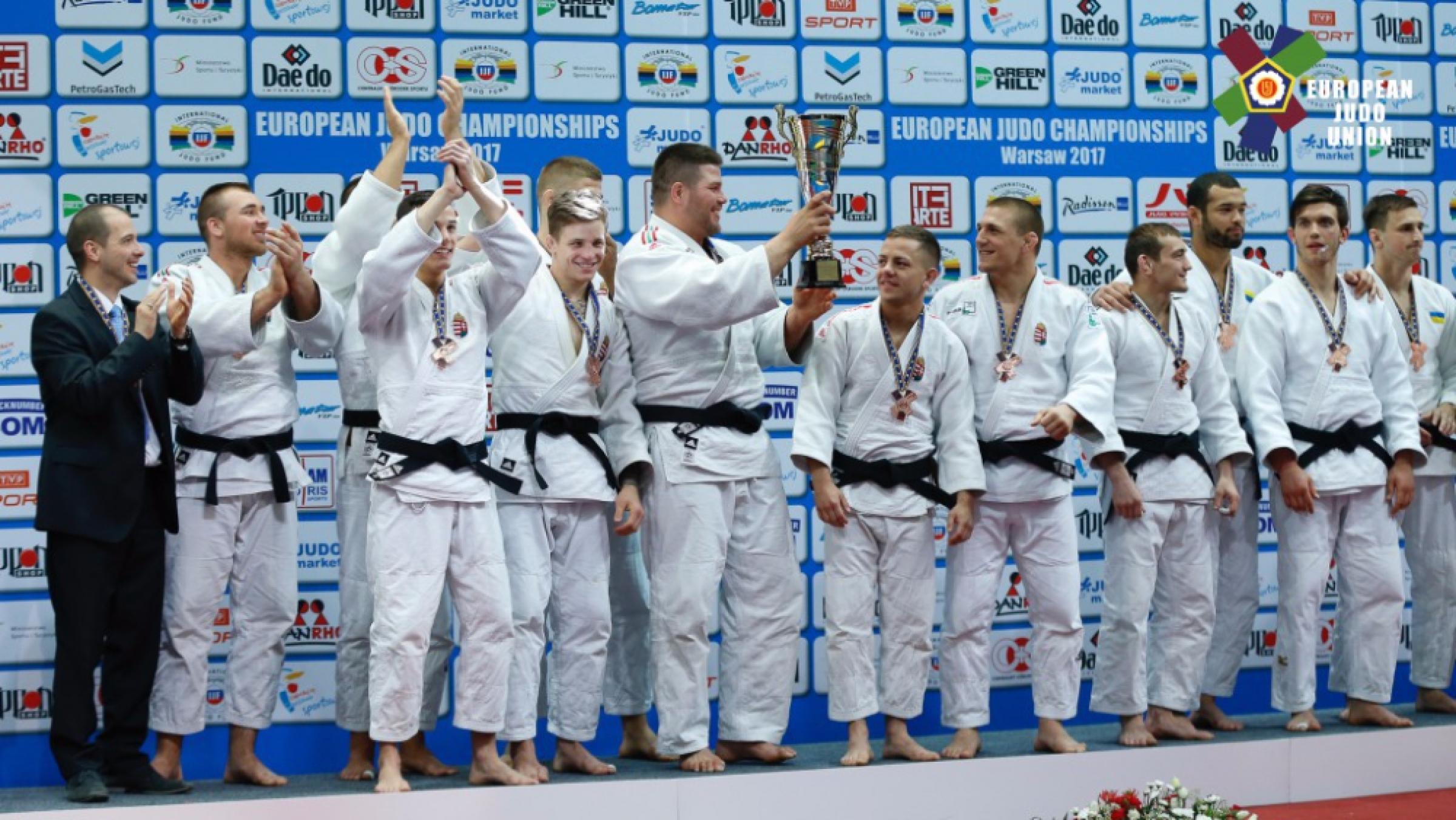 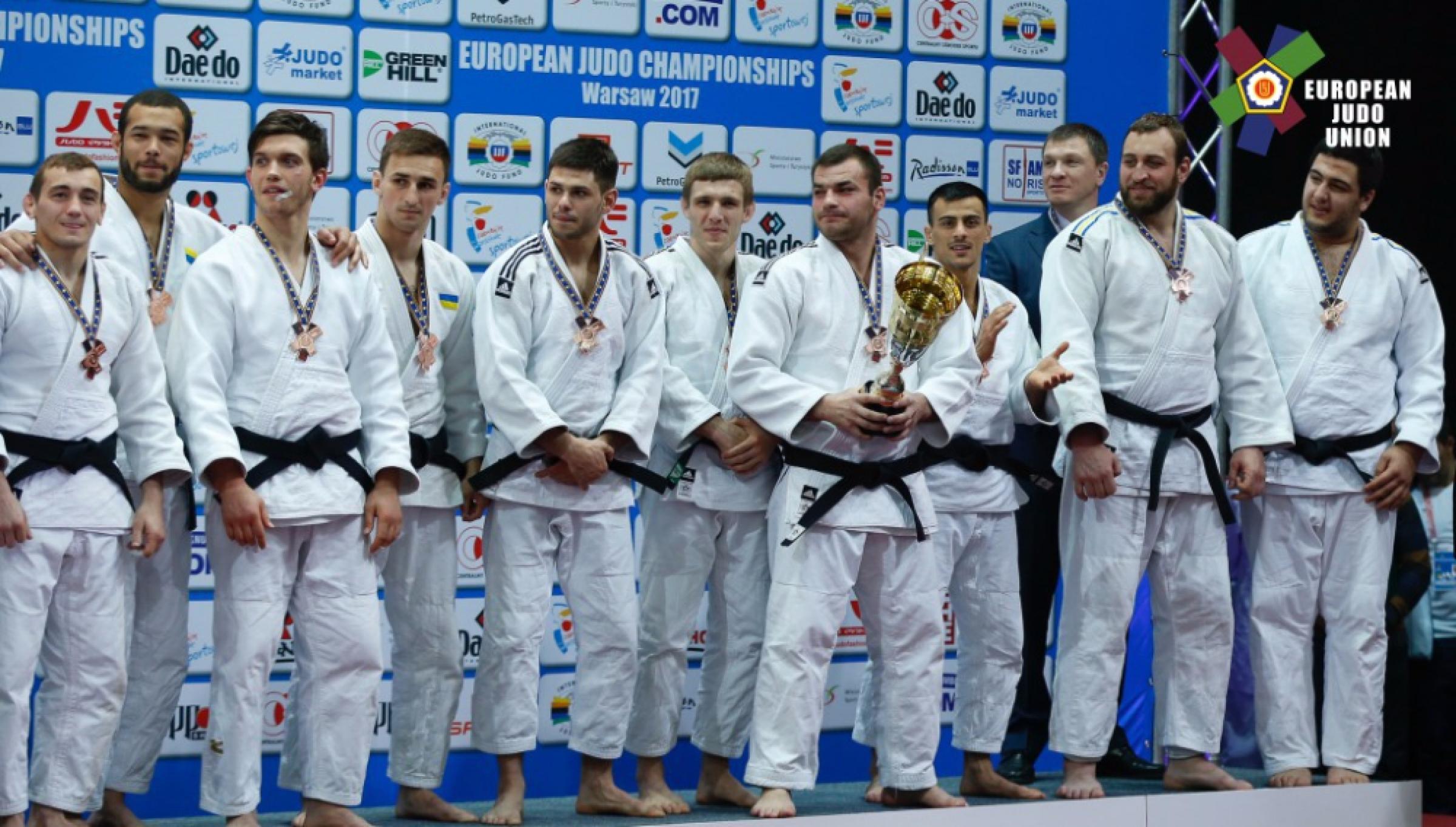