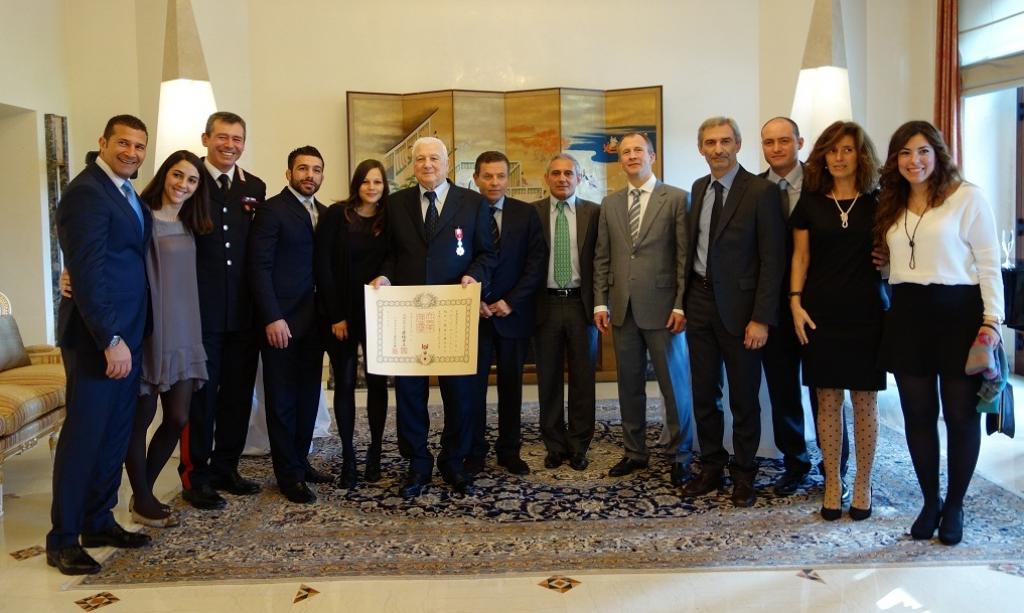 The European Judo Union is proud to inform that Mr Franco Capelletti became a chevalier of the Order of the Rising Sun.

The third highest order bestowed by the Japanese government was awarded by H.E. Ambassador of Japan to Italy, Mr Masaharu Kohno, at the Ambassador’s Residence in Rome on February 13, 2014. The EJU President Sergey Soloveychik came to Rome to attend the ceremony and congratulate the Vice President of the EJU and the Italian Judo Federation on behalf of the EJU and the IJF with a merited award. The Order of the Rising Sun is awarded to those who have made distinguished achievements in promotion of the Japanese culture, so during the ceremony Mr Ambassador explained how the Italian ninth Dan developed the friendship between Europe and Japan, and had always been a good example of the judo values worldwide. Having received the award, Mr Capelletti confessed that he could have never expected to receive such honour especially in the presence of EJU President and in front of his family and those who had supported him during his life. “I only miss one person and I would like to remember my friend Matteo Pellicone who recently passed away” said an emotional Vice President, and thanked the Ambassador for the award. Among the guests who attended the ceremony there was the new elected President of the Italian Judo Federation Mr Domenico Falcone, Olympic Champions Giuseppe Maddaloni and Giulia Quintavalle as well as world and Olympic medallist Felice Mariani. After the ceremony Sergey Soloveychik awarded a new chevalier with the EJU Silver Order of Merit on behalf of the EJU and with the IJF World Judo Tour Card, a piece of gold on behalf of the IJF. The Italian Judo Federation offered a sports costume of the national judo team as a gift to the Ambassador.