'Italians do it better' at the World Cup in Tallinn 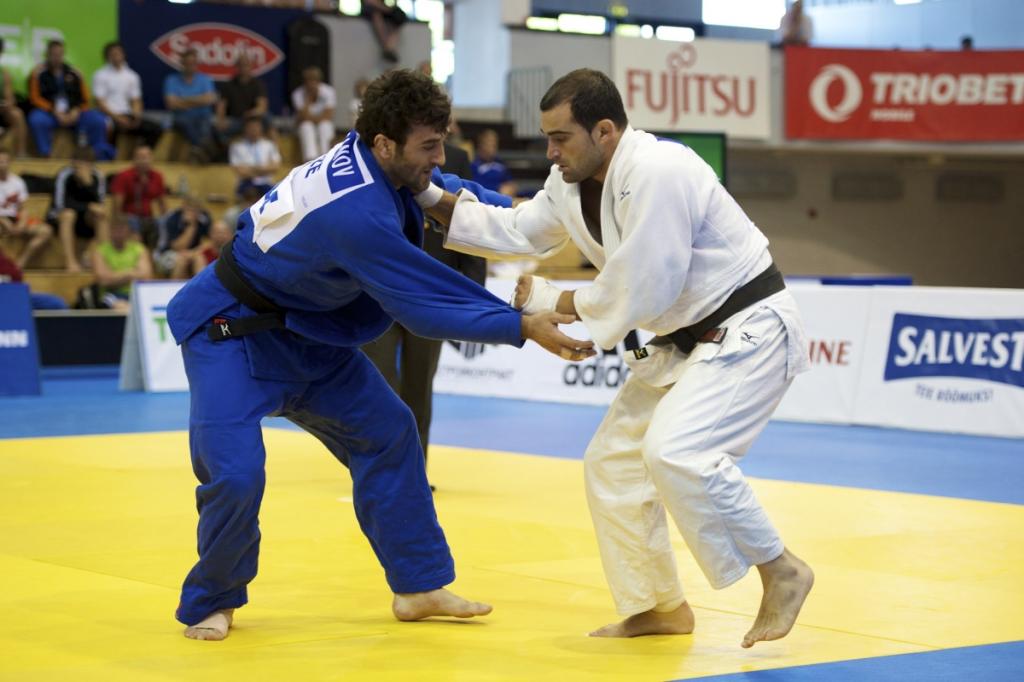 At the World Cup in Tallinn (EST), the Italian national anthem was played two times today. The Italians won the title in the U81kg and U90kg category. The best of judo of today was showed by Robert Meloni. Despite his 30-years he can still outperform and defeated all his opponents in an impressive way with perfect ippons. He waited for his moments when he hunted his rivals with an aggressive style. It was typical for today’s judo by the whole Italian team. Also Francesco Bruyere showed this kind of style.
However in a category U90kg in a very strong field, Meloni confirmed that he is back on track. Last year he had won silver the World Cup in Rome and this year he defeated all his opponents in Warsaw at the World Cup. After taking a bronze medal at the Grand Slam in Moscow two weeks ago, you can say that Meloni is in a great form, but will he hold it until the World Championships.
The style is tempting and nice to watch, but the U90kg class is one of the stronger categories. The top is marked by Ilias Iliadis but Meloni is on his way with his experience and good results this year.
In the final he defeated Ramin Gurbanov (AZE) by yuko, the only opponent who didn’t lose by ippon. Gurbanov defeated four opponents and Milan Randl (SVK) in the semi final. Randl finished third as well as Victor Semenov (RUS).
It wasn’t the day for four Ukrainian fighters who competed in this category. Guys with a huge experience were spanked by their greedy opponents: Roman Gontyuk, Valentyn Grekov, Quedjau Nhabali. Only Vadim Synyavsky met with the expectations.

In the U81kg Francesco Bruyere was one of the two Italian semi finalists. The Italians had to fight two Russian judoka and Bruyere was able to defeat both Azamat Sidakov (RUS) as well as Ivan Vorobev (RUS) in the final.
Matteo Marconcini the other semi finalist lost against Vorobev but won his bronze bout against Tomislav Marijanovic (CRO) who lost against Sidakov in the quarter final. The Russian took bronze in the end against Jaromir Musil (CZE).

In the end the Ukraine did win a gold medal. U100kg it was Viacheslav Denysov who won the final against Viktors Reshko (LAT) who sollected the second silver medal for Latvia. Yesterday Andrej Magers won silver.
Denysov defeated four opponents today and two Latvians in his last two bouts: Borodavko and Reshko. Borodavko was not in his best shape today. He was marked as one of the favourites in advance.
European Champion Amel Mekic (BIH) did not compete in Tallinn. Artem Bloshenko won another medal for Ukraine. Or Sasson (ISR) won bronze with good and aggressive judo today in all his matches. He won bronze against Martin Janata (SVK).

In the +100kg class Marius Paskevicius (LTU) defeated Vladimirs Osnacs because of hansokumake in this Baltic final. Paskevicius won four matches and Osnacs who was good in his first two matches defeated Luuk Verbij in the semi final, although later it proved that this could have been a hansokumake as well, so he was rewarded in the final for leg grabbing.
Verbij did win bronze after all defeating his compatriot Grim Vuijsters who has had quite some minutes today. Vuijsters is getting back from a broken neck and is still lacking confidence to throw his opponents like last year before his got injured. Today’s experience however will help him to keep fighting.
Walter Santos who is preparing for the World Military Games in Rio, won bronze, his only moment that he made a good score today against the tall Renat Saidov (RUS). The heaviest of all competitors, Santos weighs over 150 kgs but defeated Saidov with an excellent point in the final taking bronze back home.
Latvia took three good medals but unfortunately all silver. Italy was the most efficient team with 7 participants and four medals and twice the Fratelli d’Italia.

For more results and photos check our results section.
https://www.eju.net/results/?mode=showResult&id=623