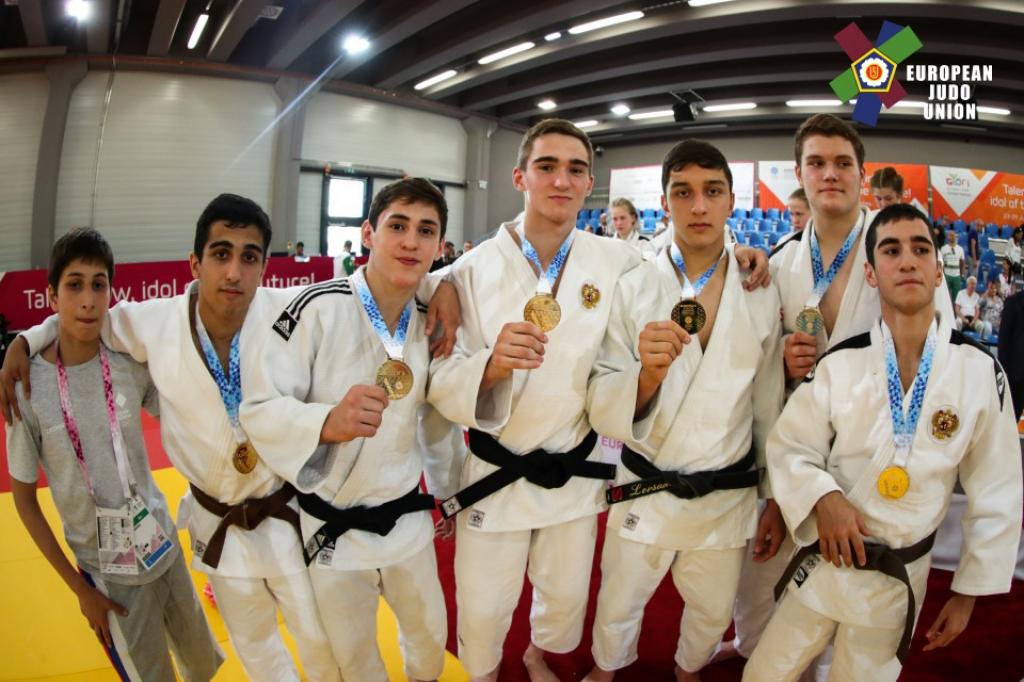 For the first ever time in the history of EYOF, the team event took place on the last day of the judo event. Olympic Sport Park saw eight girls and twelve boys teams competing for the last piece of glory there is left to claim, the team title. 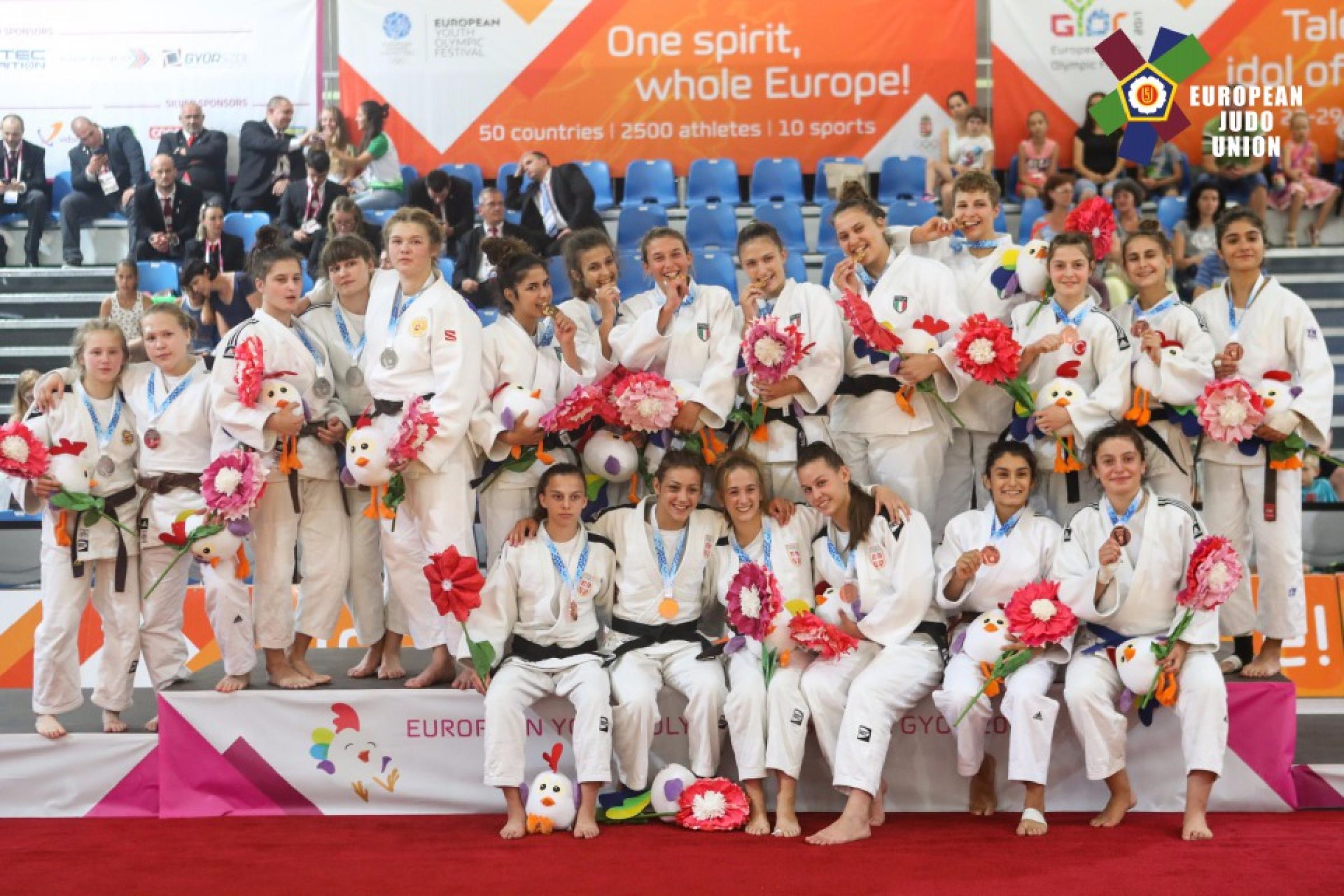 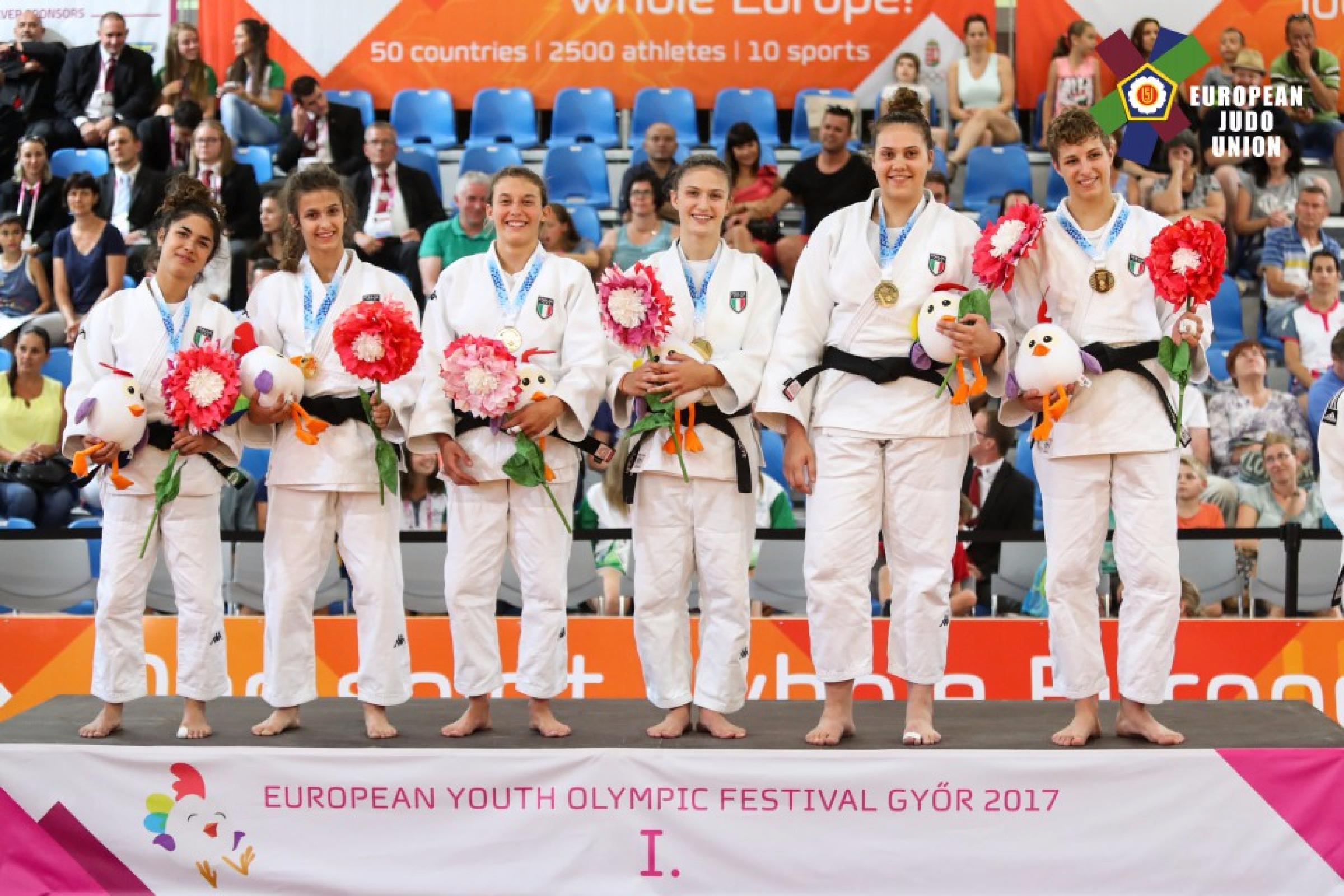 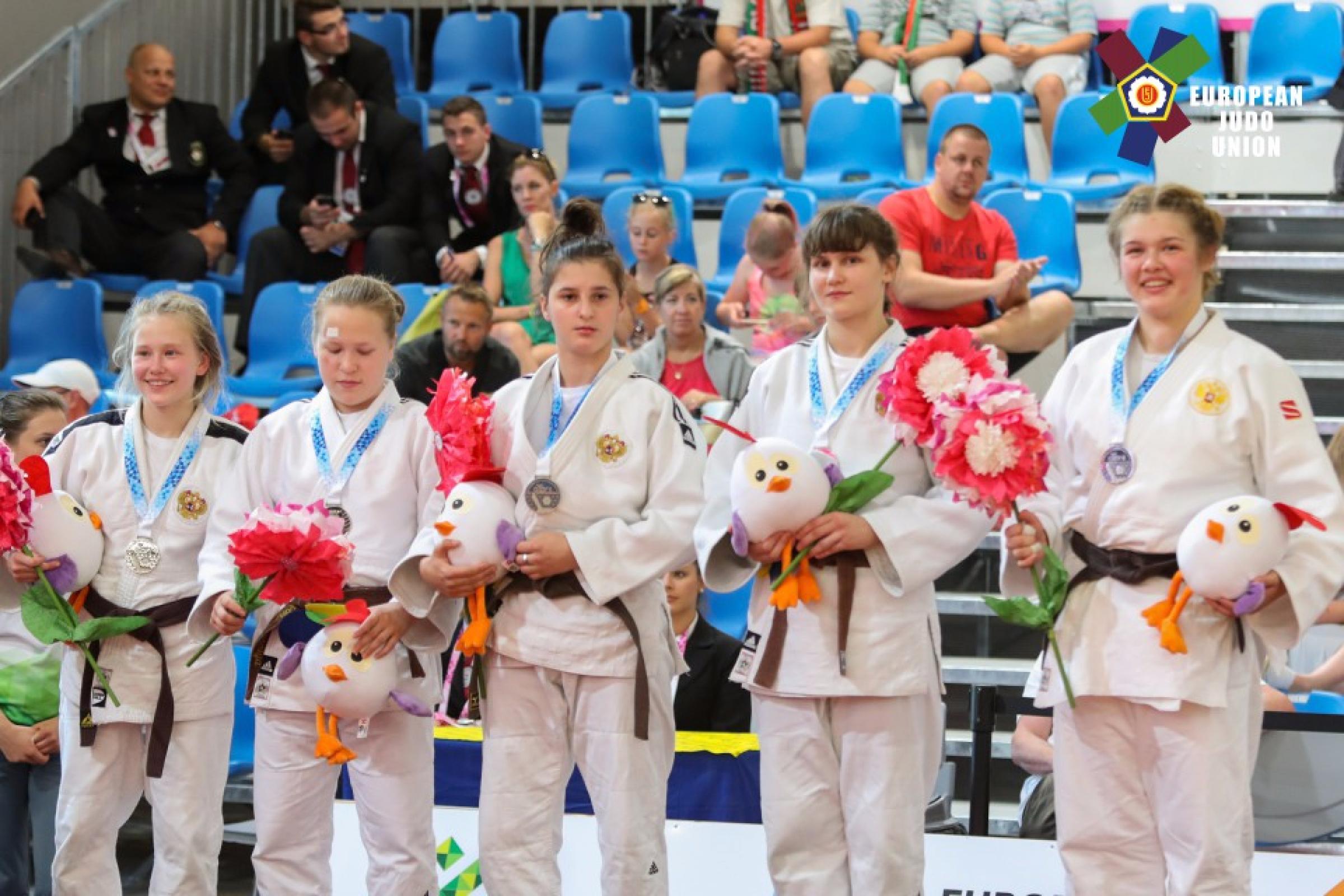 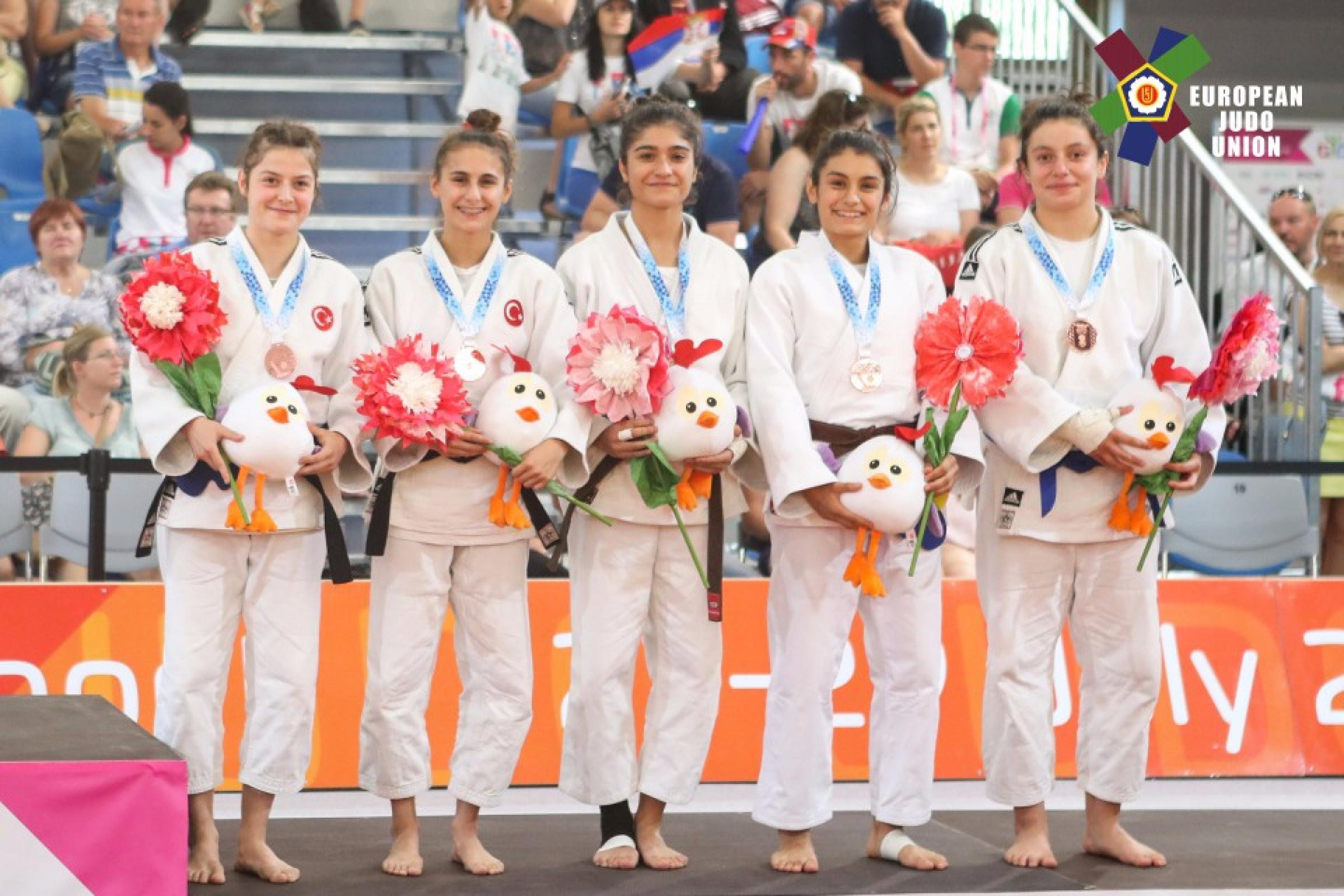 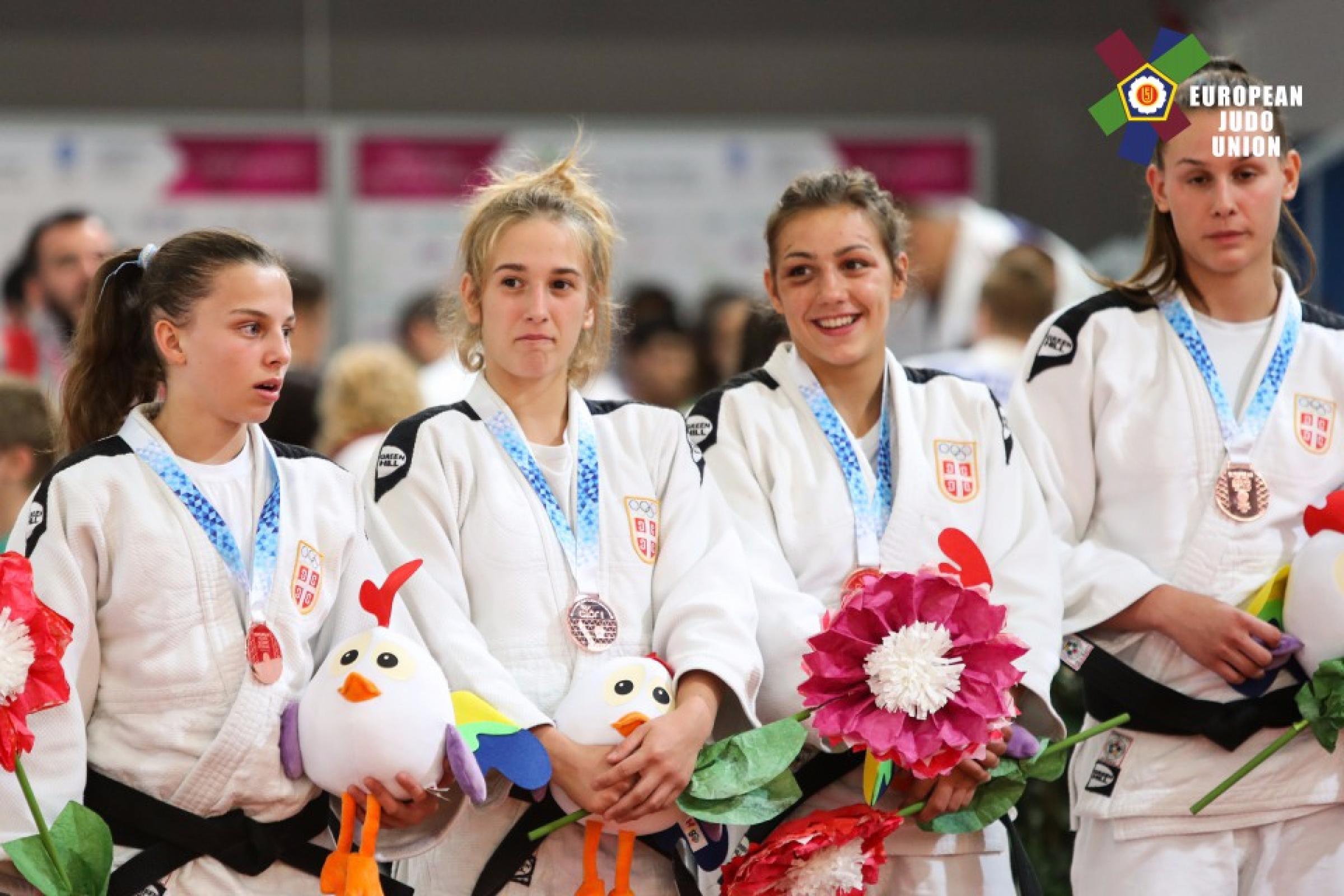 Italy first defeated Serbia’s supreme three during the quarter-finals of the girls’ team event. Andrea STOJADINOV secured the first score for Serbia, however from this moment onwards it has all gone downward for the more favoured team, Serbia. The moment Irene PEDROTTI (ITA) defeated Marica PERISIC (SRB) during the exchange of the -57 kg category, the Italian team celebrated not only this single victory but their spot into the semi-final. During the semis, Italy’s girl team faced not only four Hungarian judoka, but hundreds of supporters. The Hungarian team had a gap in the -63 kg category, which meant that Italy’s finest five only had to secure two wins to be guaranteed a medal. It was yet again Pedrotti who kept the faith into the Italian team when she overcome MAROTI Alexandra (HUN). This meant that the pressure went onto the last two athletes, namely, Betty VUK (ITA) and FARAGO Petra (HUN). Vuk of Italy had an unlucky day during the individual tournament, however, today she showed her real potential when she stunned the Hungarian judoka to lead the Italian team to the final of the EYOF Gyor 2017 girls’ judo team event. 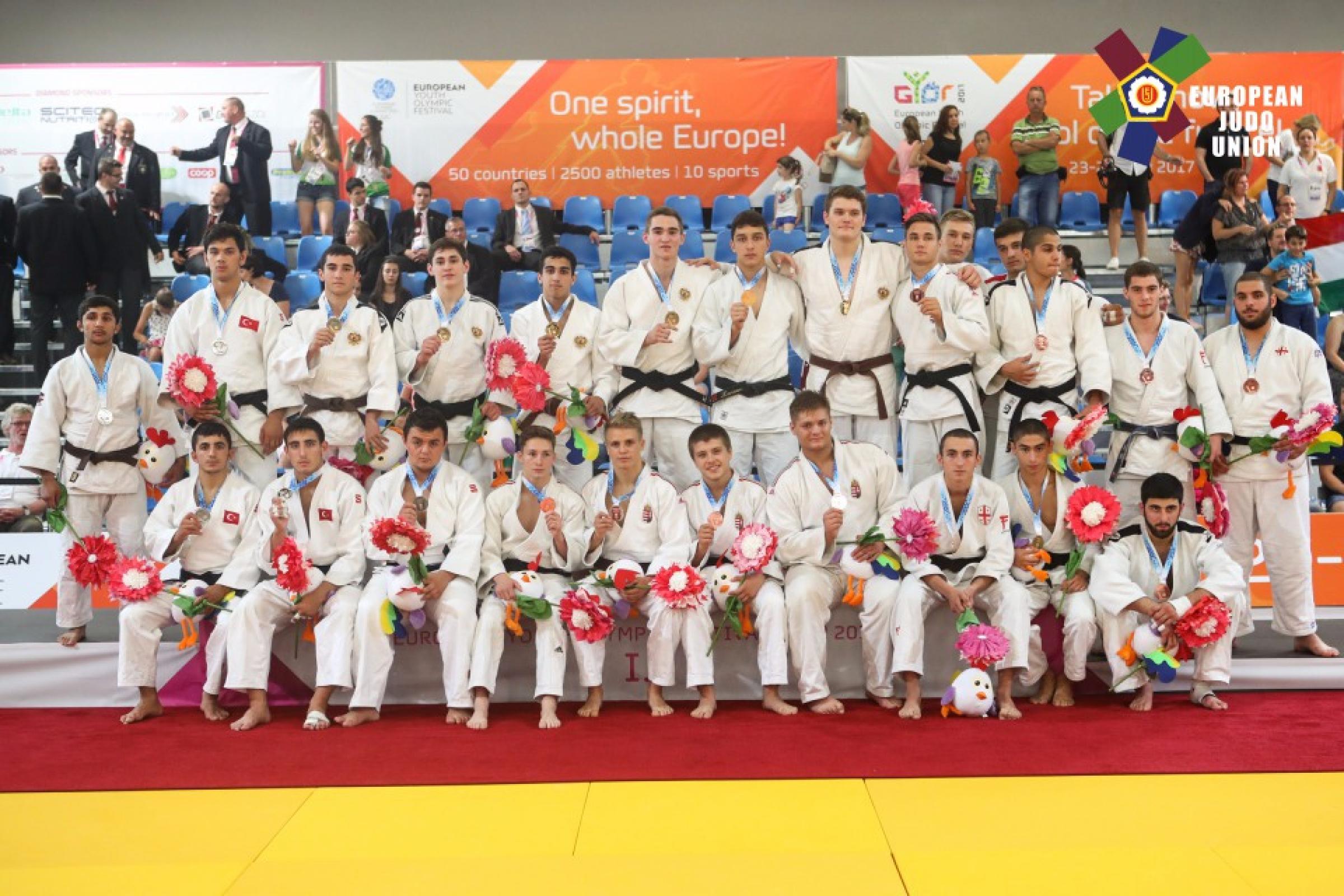 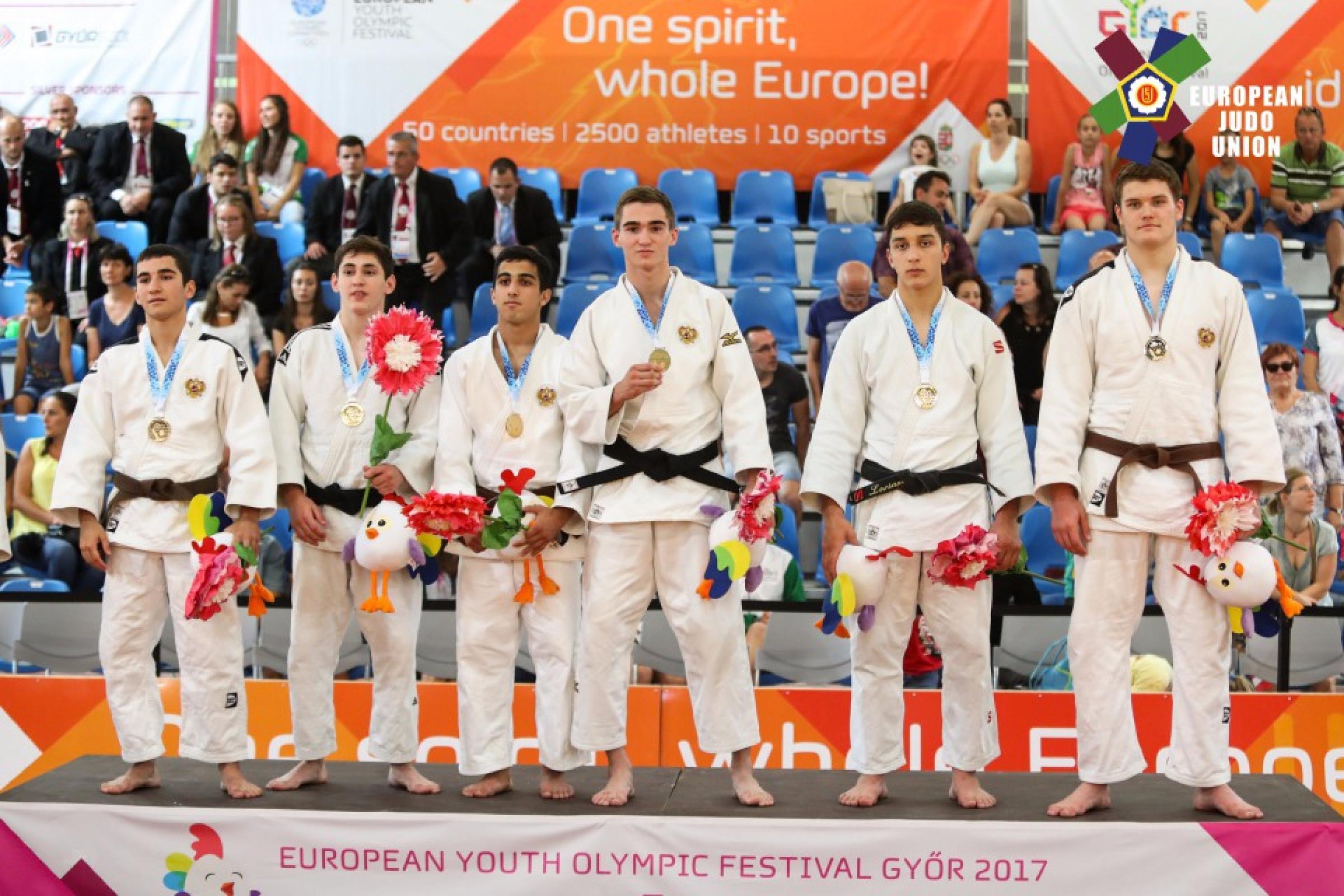 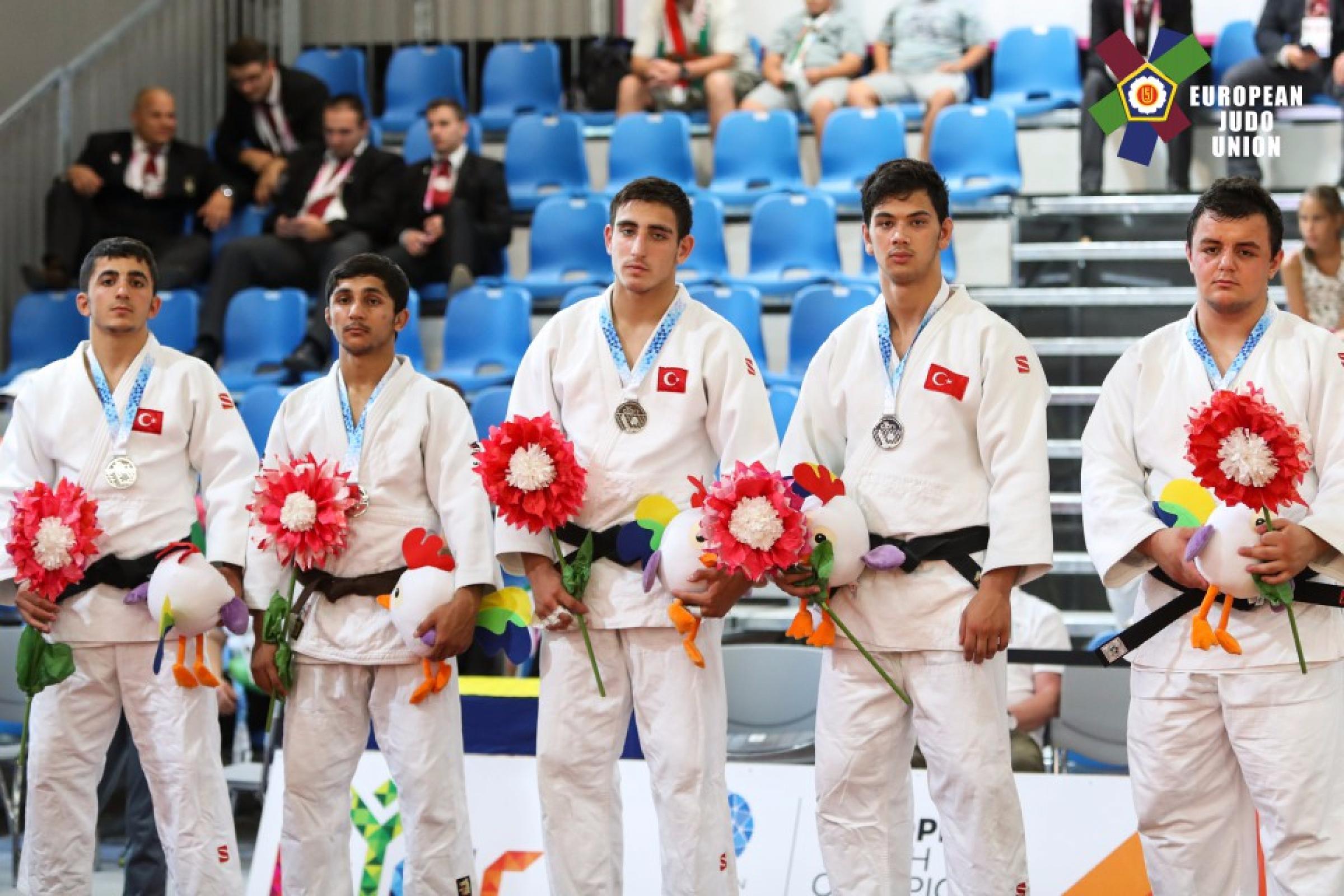 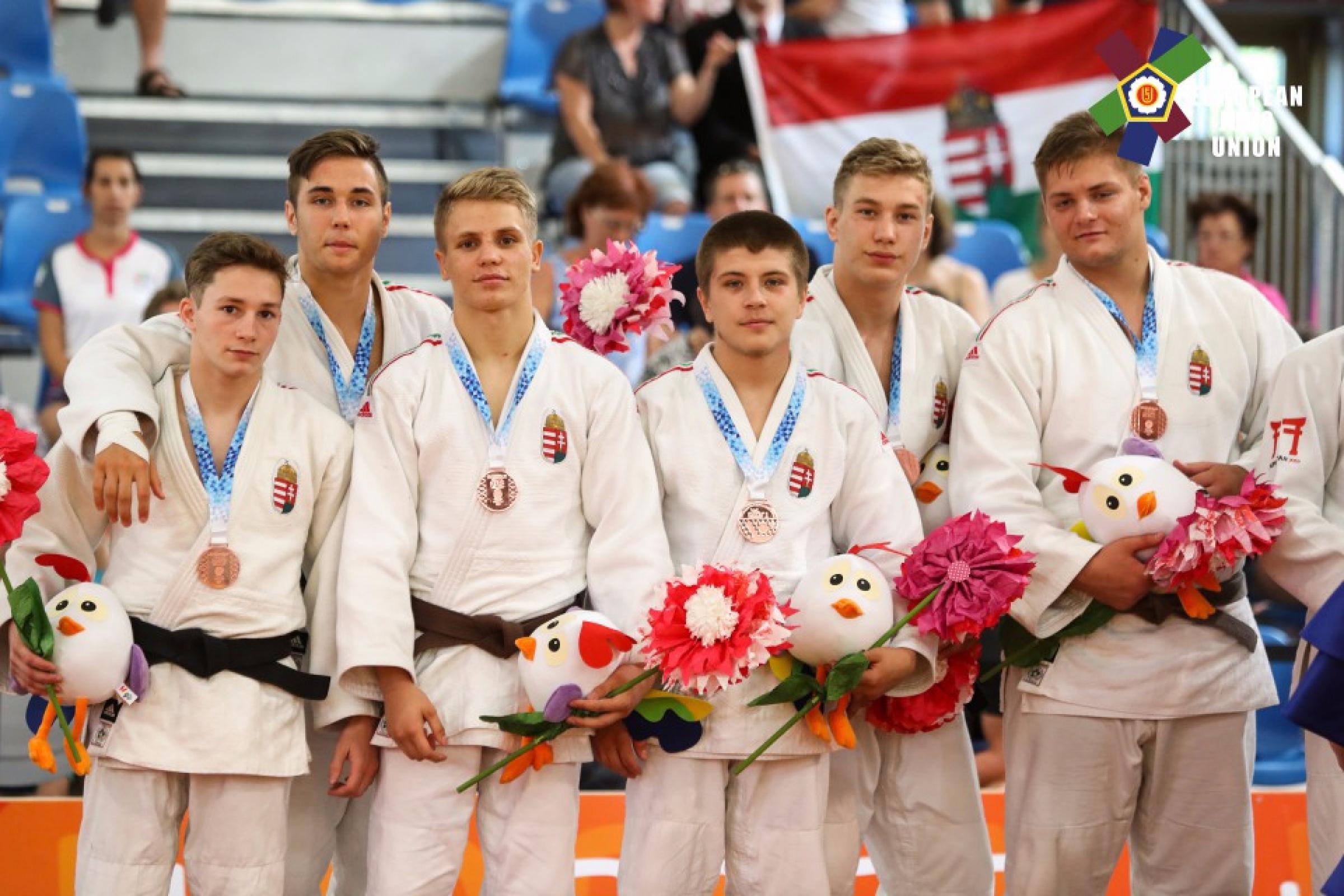 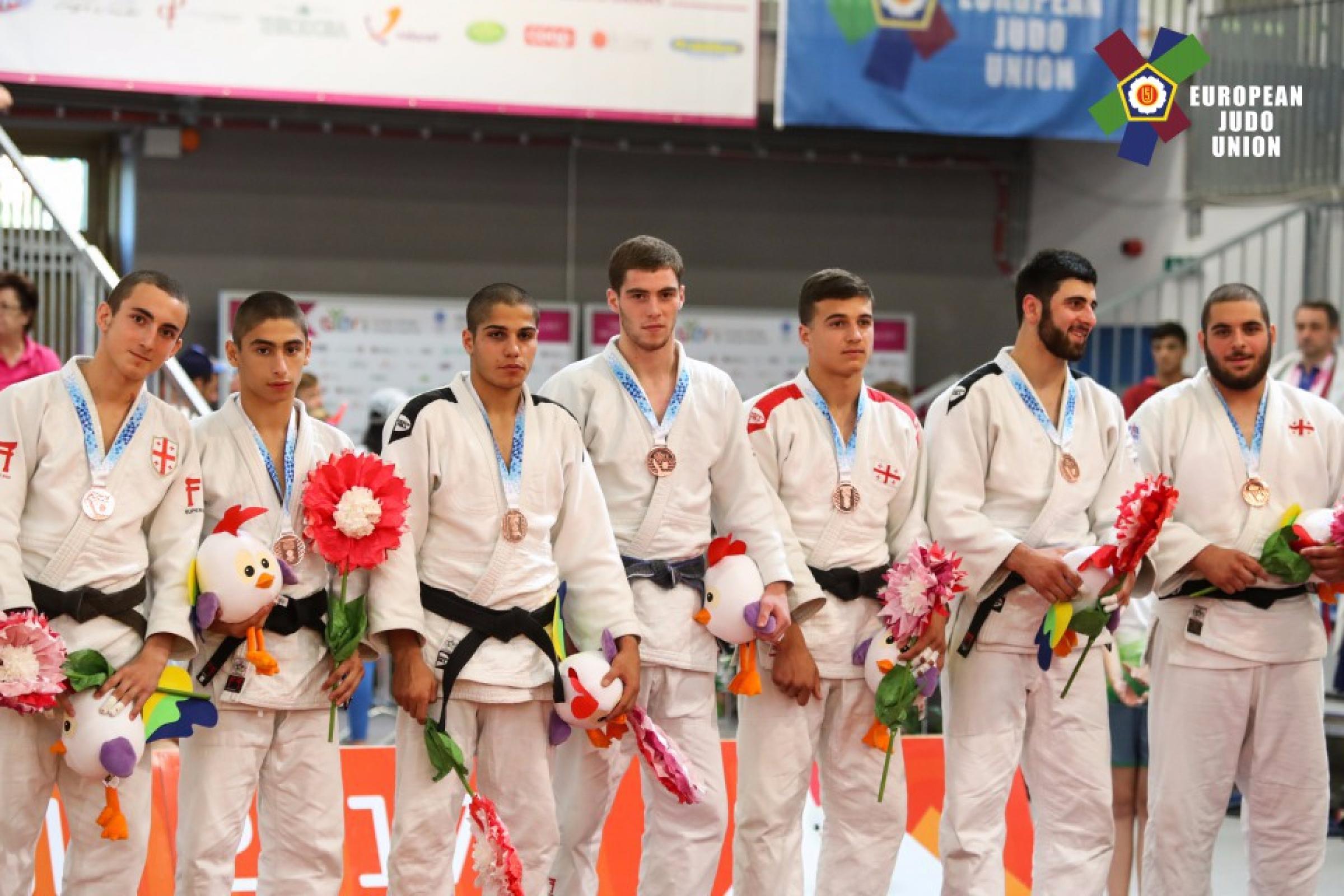 Russia strived through the upper half of the draw to meet the Italians in the final. Russia stood up for the challenge with four athletes whilst Italy, yet again, had their finest five lined up. This time, the gap was in the -57 kg category, which gave a well-deserved rest to Italy’s lucky charm, Irene Pedrotti. Similar to their previous exchange, the Italian team needed to win two contests to guarantee the gold. Both, Matilda AVILA (ITA) and Alessia TEDESCHI (ITA) won their contests, and right after the successful start the Italian team was able to celebrate their EYOF Gyor 2017 Judo team title. Russia settled for silver. Turkey, alongside Serbia, won bronze.

“I did believe that the girls can win a medal but gold, well when I saw the draw. I believed in the gold immediately after we defeated the Serbian team where Pedrotti outclassed Perisic with good tactical work and strong kumikata. The final was also unexpected, we were prepared for a much tighter contest.”

“We didn’t expect gold at all today. The first match was the strongest team here but our 57 kg player did an excellent work. None of us managed to win individual medals so it was a nice end to it.”

The boys’ team event also delivered an ecstatic show. Top two picks of the day were Georgia and Hungary, however, by the end of the day, both had to settle for bronze. Instead, the Russian and the Turkish team excelled to the final. The primary overcame Georgia, whilst the latter set Hungary back during the semi-finals of the boys’ team event. The final was rather interesting as it went head to head until the very end. Salih YILDIZ (TUR) threw Khetag BASAEV (RUS) twice before holding him down for good. Karen GALSTIAN (RUS) answered to the defeat in style when he held down Mihrac AKKUS (TUR). Next up was EYOF Gyor 2017 winner of the -73 kg category, Muhammet KOC (TUR), whom first scored waza-ari on Daniil MATVEEV before stunning the Russian fighter for Ippon by a dazing uchi-mata. Mansur LORSANOV (RUS) vs Faith KOSA (TUR) was the next contest up, where Lorsanov took the pressure and used it on his advantage to defeat Kosa. So, there it was, the moment of truth. Mikhail MAKHINIA (RUS) was facing Omer AYDIN (TUR) for gold. The Turkish fighter overcome Makhinia the day before during the reprechage of the +90 kg category, however, today was another day. First it was Makhinia scoring for waza-ari and with only five seconds to the end of the contest, Aydin bounced back with a waza-ari. Therefore, it was time for golden score. A second away from the end of the first minute of golden score, the Turkish fighter launched across for a morote-seoi-nage attempt from which he quickly tried to return for an ouchi-gari, but at the exact same time, Makhinia came up with a kosoto-gake solution to close EYOF Gyor 2017 judo team event with the national anthem of Russia.

“I lost him [Aydin] yesterday, so I knew that maybe I will not win but I will try my best. I spoke to my coaches and they explained the mistakes from yesterday and also told me what to change for today in my judo style and it worked. I needed to be faster and always have two hands on for grip. Everybody was looking at me and I knew that I must win this. It is tough to be the last one and have the pressure on but I kept on going with what my coaches were telling me and I am happy we won.”

“Now we won the first gold in the team event at this age group so it is really great. Of course, there was pressure with the golden score but we believe in our athletes to win gold and that is the most important; after that, it is judo, anything can happen. In the final we thought that for example Khetag Basaev will win the first contest for us but he lost. This is judo, but the main thing is that we keep believing.”