Ivashchenko powerful to her and Russia's 4th gold medal 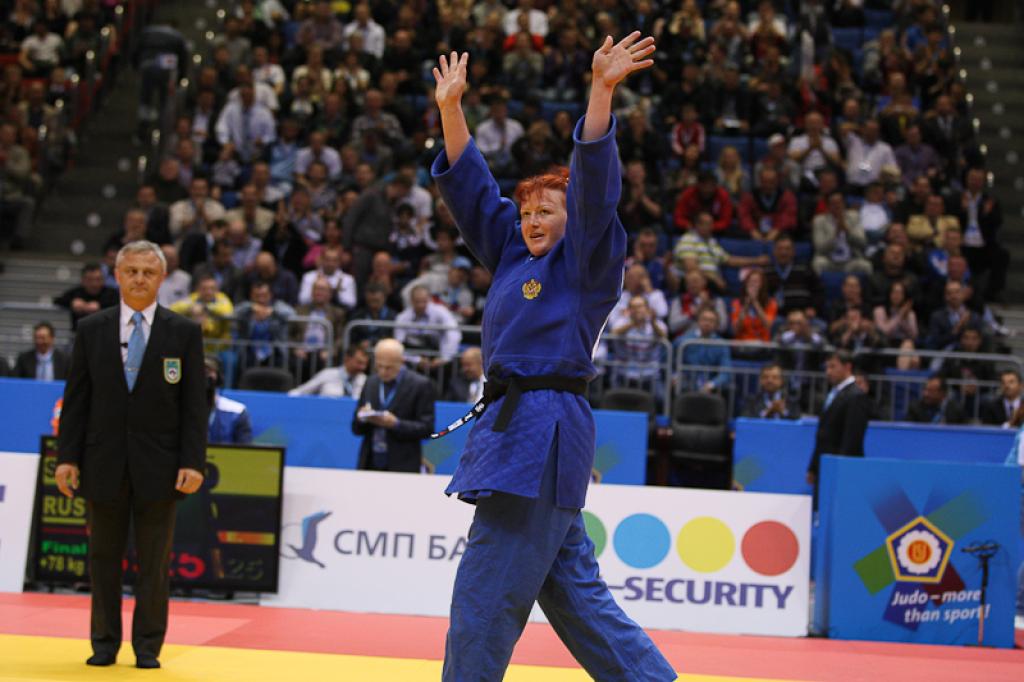 Russian Elena Ivashchenko collected her fourth European title. In Chelyabinsk she prolonged last year’s title of Istanbul in the final against Lucija Polavder. A well known rival, she fought the Slovenian 16 times in international matches and won her 11th encounter. This year Ivashchenko was better in the final of the EJU World Cup in Sofia as well. The reasonably smaller Polavder tried to take the initiative but Ivashchenko was so strong she threw Polavder to the ground and controlled her taking the title, powerfully cheered by the home crowd. An ocean of noise for Ivashchenko who enjoyed the public and vibrations in the Traktor Stadium. Polavder won 7 European medals and wasn’t used to losing her last fight, five times she won bronze but never lost a final.
Ivashchenko is experience but added to our reporting team: “With each time it gets harder to win. You know your opponents in and out such as Lucija Polavder. Sometimes she was winning, sometimes I was. They are saying it is nice to compete at home. On the one hand a lot of people constantly support you, ask for a picture and autograph on the other hand this is a little distracting.
Ivashchenko isn’t sure for Olympic qualification yet. “I don’t know yet. We have two people that are in the qualification list. Our coach will decide.“ Tea Donguzashvili is her rival for Olympic qualification.

Lucija Polavder wasn’t too dissapointed and enjoyed the practise: “I am pleased to have won my seventh medal. I have one gold, one silver and five bronze medals from Europeans. This was a good test before the Olympic Games. It was good to experience this festive, lively atmosphere.“

Karina Bryant showed she is still capable for a surprise. Her last trick will be the Olympic Games. Getting ready for this Chelyabinsk is a nice stop for the train calling for London. Bryant, aged 33 now has a great reputation winning four European titles in 1998, 2000, 2003 and 2005.
100 seconds before the end she threw 13 years younger Larisa Ceric for Ippon. Who knows, the British flag will rise in London. At least she keeps each hope alive.
Karina Bryant (GBR): “I am pleased with my performances today. I lost against Ivashchenko in the semifinal, she is one of my main opponents for London if she qualifies. We had a good fight. This event gives me an opportunity to see where I am.“

The second bronze medal was for Belkis Zehra Kaya from Turkey who had a tough opponent in Carola Uilenhoed (NED). The two heavyweights kept the crowd excited using the golden score. “This is my first medal at the European Championships, so I am very happy with it“ after she defeated Uilenhoed in the golden score of a tough match.

Lucija Polavder won her seventh medal at the European Champions but couldn’t repeat her performance title in Vienna in 2010 when she defeated Tea Donguzashvili in the final witnessed by PM Putin. Elena Ivashchenko prolonged her title in Russia and claimed the fourth European title. Three in the plus category and one in the open category in 2007.

Ivashchenko secured the fourth gold medal for Russia. Eight countries heard their national anthem for their gold medal this championship.