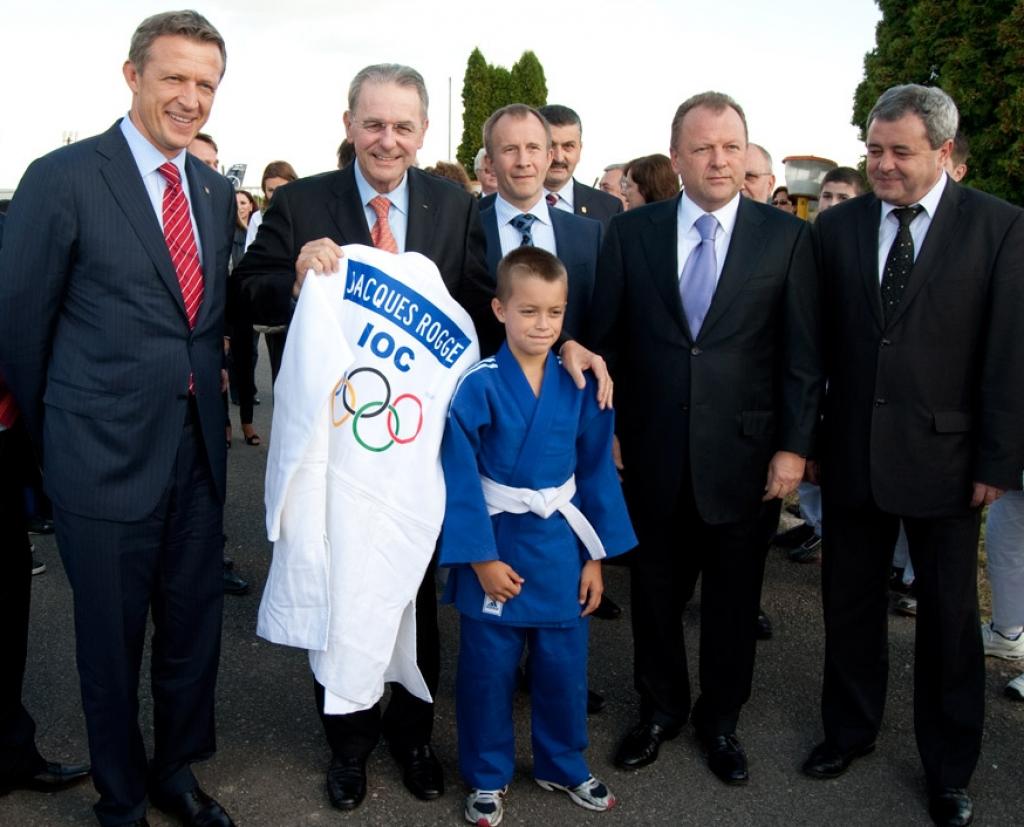 The President of the International Olympic Committee, Belgian Jacques Rogge visited the city of Oradia in Romania to receive the title of “Doctor Honoris Causa” in the presence of young children gathered several hundred meters from the runway, all wearing their most beautiful judogi and all of them coming from the local club of Ciprian Fleisz, who is also a Romanian junior national coach and Kata Champion.

Jacques Rogge was really pleased to be welcomed by so many young sportsmen and sportswomen, showing how strong judo in the region is. A few words and a few greetings later Rogge received a superb judogi from the youngest judoka present. The judogi with Rogge’s name on the back and with the IOC and IJF logo on it.

The title was awarded in the presence of IJF President Marius Vizer, EJU President Sergey Soloveychik, Vice-President of the European Judo Union Daniel Lascau, Eduard Doandes, President of the Romanian Judo Federation and many others.
Mr. Rogge delivered a very strong message to the assembly. It is also very important to notice that Alina Dumitru (ROU), Olympic Champion and recently bronze medalist on the occasion of the World Judo Championship, Tokyo 2010, was also present during the ceremony.

Counting 18 faculties and more than 20,000 students, the University of Oradea and its Faculty of Physical Education and Sports are among the best in the country.
In that framework, even if this was the 21st Doctor Honoris Causa title for the IOC President, that one was really the symbol of an entire life dedicated to medicine (i.e. Jacques Rogge is an orthopedic surgeon known worldwide) and to sports in general. Rogge participated himself to the Olympic Games before becoming today’s President of the Olympic Noble institution.

After the award ceremony, Rogge highlighted some very important points: “Sport must be a synonym for education above everything, but also a synonym for respect and fraternity. Sport helps to build a better society and peaceful solidarity. It also helps males and females from the five continents to share mutual respect.” Then The IOC president also added: “It is sometimes a little bit sad to see how sport disappears from the school curricula, when sport should be the cornerstone of the spirit and the personality of worldwide youth. Today, Olympism is a state of mind that assures the balance between education and culture. Sport can help society to educate the youth and can help to promote a mutual understanding.”

In a press conference the IOC president was accompanied by IJF President Marius Vizer who was asked by IJF’s plans as far as integrating a team competition into the Olympic program. Vizer: “For sure, we want a team competition to be integrated into the Olympic program and we want that even more now, after the great success of the team event on the occasion of the first edition of the Youth Olympic Games that were held in Singapore this past August. The team competition perfectly fits with the Olympic spirit and we would like to see that dream come true in Rio, 2016. We are ready to organize it but it is not our decision and we will make a precise proposition to the IOC”.
Rogge added that the International Judo Federation, led by its president, was on the right path and he thanked its president in a friendly way, calling him, “the child of Oradea”, in reference to Vizer’s home town.