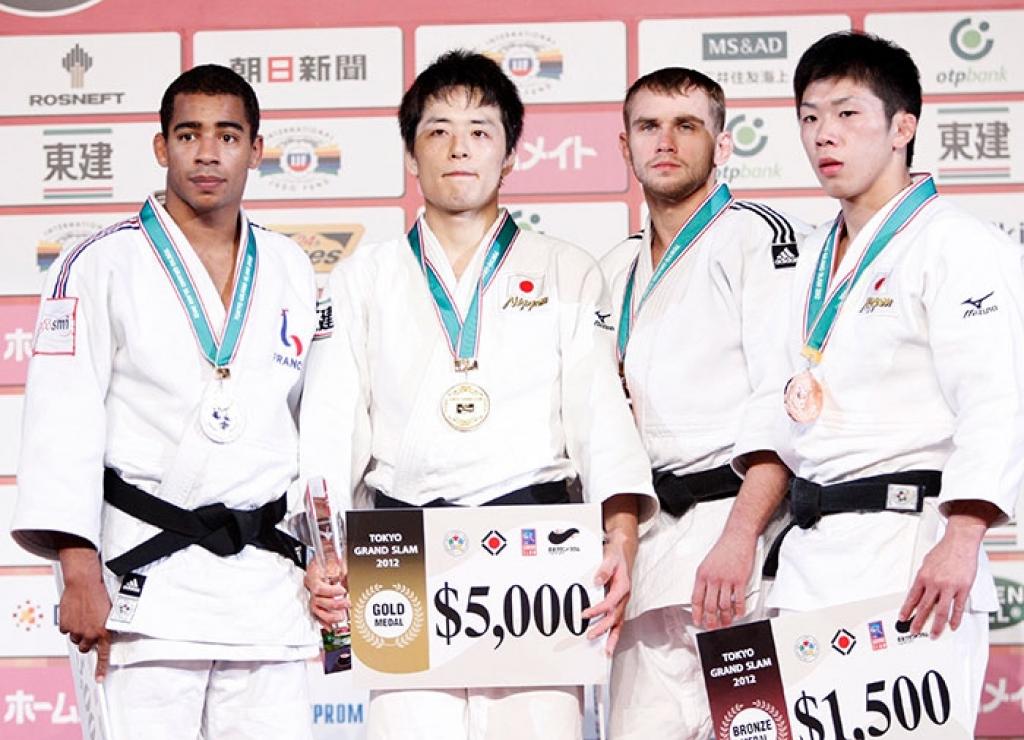 On Friday the first day of competition of the Judo Grand Slam in Tokyo was held. The opening ceremony was the occasion for the All Japan Judo Federation and the IJF to celebrate the 130th anniversary of the creation of the Judo Kodokan. On the occasion Japan claimed all of the five gold medals and gave other continents no chance. David Larose was the only European to reach the final in the category U66kg.

After only 17 seconds, Junpei MORISHITA launched a first uchi-mata against David Larose (FRA), which was first evaluated at the level of a waza-ari, but then cancelled. It was then the turn of Larose to be dangerous with one of his technic, but for no score. Again, the Japanese propelled his opponent high in the sky of the stadium, but Larose landed on his stomach for no score. The next attack seemed to be the good one for MORISHITA, but once again, LAROSE escaped… it was the last chance for Larose. For the fourth time, MORISHITA produced his effort and launched an academic uchi-mata, the French landing on his back, with, force, speed and control… the perfect ippon and the fourth victory of the day for Japan.

Mikhail PULYAEV (RUS) was not the best seeded athlete of the category, but he successively eliminated YOSHIDA Yuito (JPN) and CHO Jun-Ho (KOR) to enter the final block against MORISHITA Jumpei (JPN), who stopped the -60kg world champion, Rishod SOBIROV (UZB) with a superb ippon on the edge of the fighting area. Rishod Sobirov had already eliminated the two-times world champion, Leandro CUNHA, earlier during the competition. Just before the last three minutes of the semifinal, the Japanese scored a first yuko with uchi-mata. This first score seemed to stop PULYAEV. Suddenly, the Russian looked incapable of doing anything ‘dangerous’ for his opponent, who finally immobilized him for ippon. In the second half of the draw, the two top seeded athletes, David LAROSE (FRA) and TAKAJO Tomofumi (JPN) could make it through the preliminaries. They respectively defeated, CHO Jun Hyun (KOR) and FUKUOKA Masaaki (JPN) for the French, and VAN GANSBEKE Kenneth (BEL) and URIARTE Sugoi (ESP).

Women’s -48kg: No Surprise for Asami and First Gold for Japan

Strongly supported by her public, Haruna ASAMI seemed particularly confident when she started the final. More active than Dayaris MESTRE, the Japanese pushed the Cuban to be penalized. After 1 minutes and 40 seconds, the tactic was paying well, as MESTRE ALVAREZ had already received two shido. Showing, once again a very strong skills on ne-waza (groud work), 1:22 before the end of the fight, ASAMI won, with an inextricable sankaku-jime (shime-waza), concluded with a powerful immobilization.

Dayaris MESTRE ALVAREZ (CUB) defated Amelie ROSSENEU (BEL). Despite the pressure put by ROSSENEU, MESTRE ALVAREZ kept the lead to enter the final and Rosseneu picked up the bronze.

Back in 2009, TAKATO Naohisa (JPN), was cadet world champion. Today he is the winner of the judo Grand Slam, Tokyo 2012. This is for sure the sign of a fantastic potential an may be a great judo career. To do that, he defeated his teammate, ISHIKAWA Hironori, with a splendid combination of kata-guruma (without leg grab) and kata-guruma concluded with the leg grab for ippon.

Sofiane MILOUS (FRA) reached the final block without facing big difficulties. One minute before the end of the semi final, TAKATO defeated MILOUS, with a superb and aerial sode-tsuri-komi-goshi for ippon.

After a little bit more than one minute, Yurki HASHIMOTO scored a first yuko (uchi-mata) against her opponent Nodoka Tanimoto (JPN), which started inside the fighting area and was concluded outside, but was still valid. Just before the half of the fight, HASHIMOTO, scored again, but this time waza-ari, right in the middle of the tatami. The end of the combat was slightly more hectic for her, as TANIMOTO looked more fresh than her, but her two scores were finally strong enough to give her the victory and a third gold medal for Japan.

The first main surprise of the day came from MIYAKAWA Takumi (JPN), only ranked 25th in the world, who sent back home the world number 3, Erika MIRANDA (BRA), in the quarterfinal. In the pool B, HASHIMOTO Yuki (JPN) qualified for the semifinal to face her teammate, MIYAKAWA. During the semifinal, HASHIMOTO won by ippon (osae-komi – immobilization), in the golden score. The second surprise of the category was the defeat of the Belgium,  Ilse HEYLEN, who after a first win, lost against TANIMOTO Nodoka (JPN), who qualified for the semifinal, where she faced the Cuban, Yanet BERMOY ACOSTA (CUB), who went through the preliminaries quite easily. None of the fighters being able to score anything throughout the semifinal, the final decision was made by the referees, who unanimously designated TANIMOTO as the winner.

Women’s -57kg: 2 Penalties and the Fifth Gold Medal for Japan

The last final of the day was 100% Japanese. After the 5 minutes of regular time, none of the fighters could take the advantage over their opponent. It was time for the golden score. But as HIRAI already received a penalty during the first five minutes, the second that she got during the extra-time, gave the victory to YAMAMOTO and a fifth gold medal to Japan.