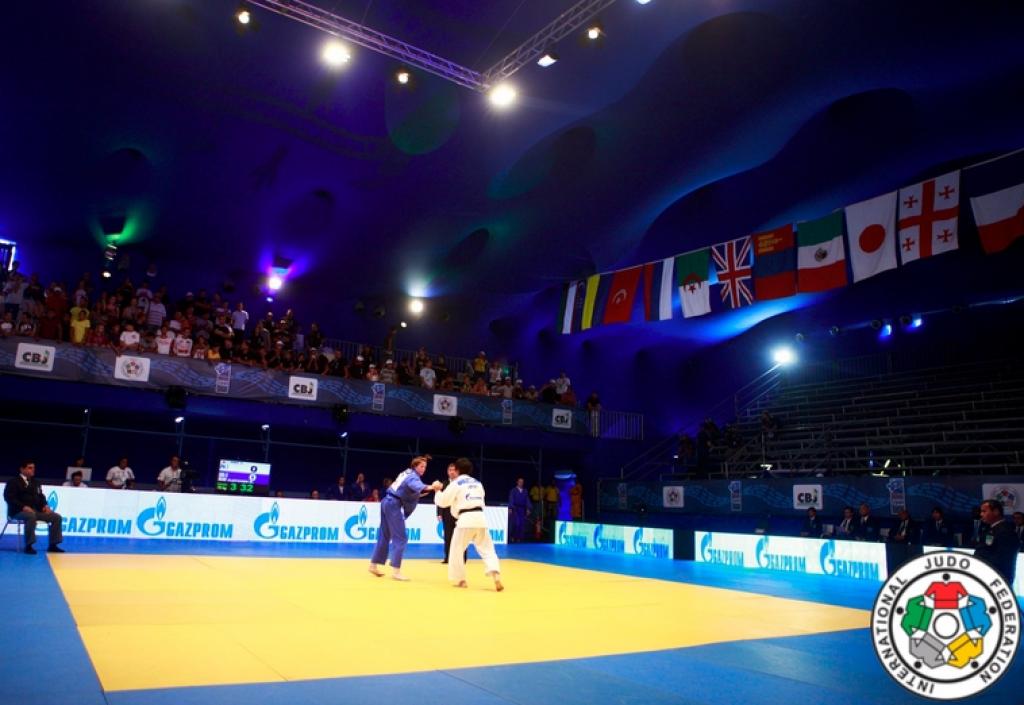 During two days (October 27th and 28th), Salvador, Bahia (Brazil) is welcoming the Judo World Championship Teams, which is the only senior world Championship to be organized during this Olympic Year.

In 2013, the team event will again be linked to the individual senior world championship that will be held in Rio de Janeiro next August and September. After the fantastic success of last year’s edition of the team world championship (Paris 2011), the competition organized here in Salvador has exactly the same format as the one which has been proposed by the IJF to the International Olympic Committee for an integration into the Olympic Program for Rio 2016. Meanwhile, today’s competition was dedicated to the women and 16 teams were engaged during the preliminaries.

Final: The Trophy Goes back to Japan
With the support of an important Japanese community, cheering from the stands, the first fight of the final opposed May (CHN) and Hashimoto (JPN) in the women’s -52kg weight category. With a lot a precision and opportunism, Hashimoto was able to catch May with a strong immobilization (yoko-shio-gatame) for ippon after a little bit more than 2 minutes, giving the first point of the final to Japan. The second fight showed Lu (CHN) and Yamamoto (JPN) looking for the victory. After 2:40 Yamamoto launched a first strong attack for yuko, before imitating her teammate, Hashimoto, and she concluded with a strong immobilization (kusure-tate-shio-gatame) and a second point for Japan.

In the women’s -63kg category, Xu (CHN) and ABE (JPN) stepped on the tatami, with the possibility for Japan to knock the final and with the obligation for China to win. After 1:30, Xu scored a first yuko, giving some colors to the Chinese delegation, a yuko that was immediately followed by a waza-ari. 5 seconds before the end of the fight, Abe caught Xu with an armlock from which she miraculously escaped, to finally win the fight and give a first point to China.

The next fight opposed Chen (CHN) and Imai (JPN) in the women’s -70kg. Just after the first two minutes of the fight, Imai, once again, showed all the talent of the Japanese team in ground work (ne-waza) by catching Chen with a terrific immobilization (kata-gatame) from where the Chinese escaped after 9 seconds, by using the traditional solution that every judoka learns in the katame-no-kata: rolling backwards on one shoulder.

The very strong uchi-mata produced by Imai 45 seconds bedore the end of the regular time could have scored, as well as the shoulder movement of the Chinese. But no… it was time for the Golden Score and three minutes of extra-time. Everything could happen. 1:39 before the end of the Golden Score, Chen, who seemed to be dominated, score yuko giving the second point to China: 2-2. What a suspense!

The last fight would decide between China and Japan, which team would be the new World Champion. Qin (CHN) and Tachimoto (JPN) could enter the tatami. After exactly one minute, Tachimoto was penalized for passivity. I:12 before the end, it was the turn of Win to receive a shido for passivity, dominated by the strong attacks of the Japanese. 20 seconds before the end of the fight, the waza-ari scored by Tachimoto looked like a deliverance for the Japanese delegation, which could finally celebrate and bring back home the title of the women’s team competition.

Bronze Medals Fights: Bronze for Cuba and for Brazil
The first bronze medal fight of the day opposed team Russia and team Cuba. Cuba took the first point with Yanet Bermoy Acosta’s victory against Anna Kharitonova (waza-ari). The second fight opposed Ryzhoda (RUS) and Ojeda (CUB). The golden score was necessary to decide between the two athletes. But only 9 seconds were necessary for the Russian fighter to score a yuko, synonymous of one point for Russia.

The third bout opposed Beloivanova (RUS) and Espinosa (CUB) and once again the golden score was needed to decide who will offer one more point to her team. More aggressive on her gripping, the Cuban seemed to be in the position to win, especially when she scored a ippon on the edge of the tatami, ippon immediately cancelled by the two judges. The fight coming to an end, with no score, the referees decided to give the second point to Cuba by flag decision. 2 for Cub, 1 for Russia.

The fourth match opposed Denisenkova (RUS) and Cortes Aldama (CUB). After a fantastic preliminary session in the morning, with many ippon and really fantastic technics, for the third time in a row, the fight went to golden score, none of the two athletes being able to score a single yuko, until the last 40 seconds, when Cortes Aldama gave the third point to her delegation with a makikomi for yuko. With this narrow victory, Cuba won the needed point to win the bronze medal.

The last fight opposed Ivashchenko (RUS) and Kaliema Antomarchi (CUB) who replaced Idalys Ortiz, injured earlier during the competition. Slowly, taking advantage of her tall size, the Russian, took the lead by penalties before scoring ippon with a counter attack (tane-otoshi) 50 seconds before the end of the fight, but that was not enough to come back for Russia. The first bronze medal went to Cuba.

The second bronze medal fight opposed the host country of the championship, team Brazil, and Mongolia, which was defeated in the semi-final by China. Miranda (BRA) and Baljinnyam (MGL) were the first two athletes to enter the arena under the hurrays of the public. Miranda, rapidly scored a first yuko, before scoring an incredible ippon with a hip movement (o-goshi). The second fight opposed Quadros (BRA) and Dorjsuren (MGL) in front of an electrified audience. At 3:20, after video control (action on the edge) the Brazilian scored a first waza-ari with a shoulder movement (morote-seoi-nage) and again an other waza-ari with a foot block (sasae-tsuri-komi-ashi). 2 points for Brazil.

For the third fight, it was the turn of Silva (BRA) and Tsedevsuren (GML) to take the floor. After two minutes of fight, imitating her teammates, Silva scored an other incredible ippon with a counter attack launched when her opponent was dominating her with a cross-grip. 3 for Brazil. The last two fights would be for the honor. In -70kg, Portela (BRA) and Tsend Ayush stepped on the tatami. After one minute and a half, Portela scored with a counter attack (Ura-nage) for yuko, an advantage that she kept until the end, giving the fourth point to team Brazil. The last fight of the second bronze medal fight opposed Altheman (BRA) and Purevjargal (MGL) and after only 24 seconds, the Brazilian gave the fifth point to her delegation for an indisputable victory.

Premiminaries: Desillusion for the Current World Champion
In the first round, the current team world Champion from last year in Paris, team France, was immediately defeated by a strong and concentrated Chinese team, which then defeated Russia, which had won against Argentina in the first round.

In Pool B, advantage went to the two Asian delegations, Korea and Mongolia, which respectively defeated Germany and Ukraine, Mongolia showing the most powerful judo to win its ticket for the semi-final to face China. With the same fighting spirit that the young ladies of the Chinese team showed all day long, China could win its semi final to enter the big final of the day.

In the Pool C, the two favorites were Japan and the host country, Brazil. And with no surprise, both teams qualified for the quarter final, by wining against Great Britain and Mexico, before facing each other for a ticket to the semi-finals. Under the leadership of Sarah Menezes, the Olympic Champion in the women’s -48kg category, Brazil, which was supported by an enthusiastic crowd, believed until the last fight, that it would be possible to send the Japanese squad back home. But Maria Suelen Altheman couldn’t do anything against Megumi Tachimoto, the final and winning point of the quarter final going to Japan.

In the last pool of the preliminaries, Cuba showed the best potential and could enter the semi-finals, led by its Olympic Champion, Idalys Ortiz, after having defeated team Algeria and team Turkey. But the presence of the Olympic Champion was not enough to motivate the Cuban team agains Japan, which easily entered the final, with four victories.
After the quarter finales, three Asian countries qualified for the semi-finals: China, Mongolia and Japan, the last team to be qualified being Cuba, and finally China and Japan could enter the final of this first day of competition. In the repechage, Russia and Brazil respectively won against Korea and Turkey to enter the fight for the bronze medal.