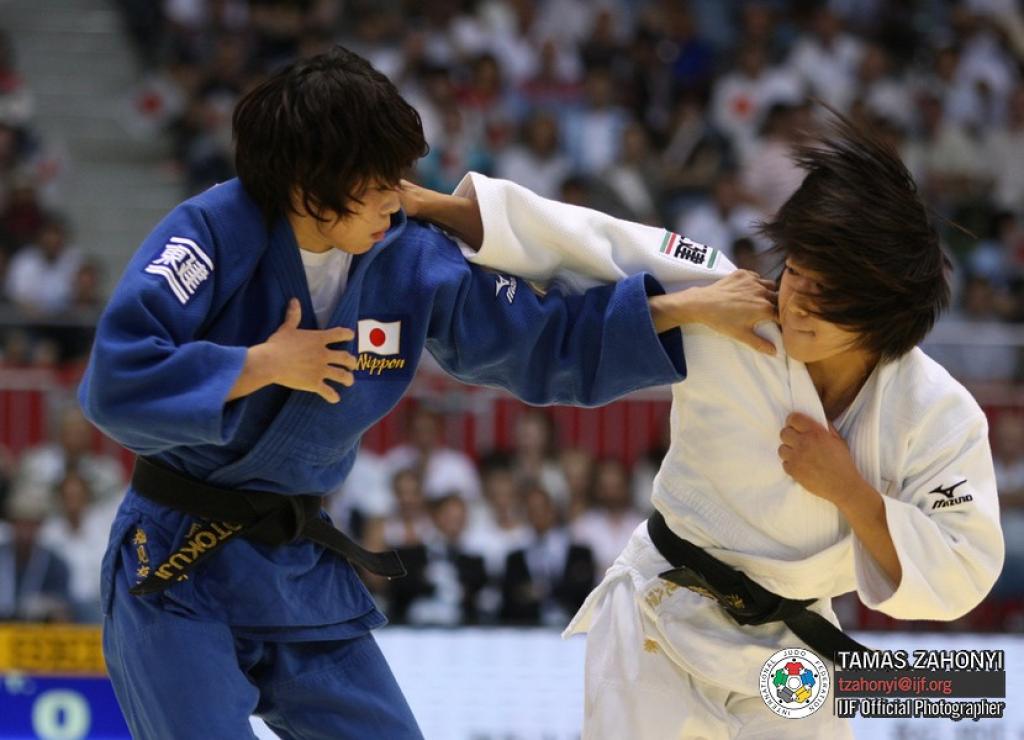 Again a superb day for Japan with three new world champions and six medals in total and two all Japan finals, adding to a total of Eight World Champions and 18 medals in total.
But it’s also a confirmation of the system adding another possible participant for each country. Today enough prove that the best two athletes should be in the final and it was the case in both the women’s U48kg and U52kg category where Japan is dominant the whole year.

Women’s U48kg
What a sensation in the hall today when the two best judoka U48kg fought their match. The hall was almost exploding. Haruna Asami was leading with 100 seconds to go against 2009 World Champion Tomoko Fukumi. She defended her lead fantastically on the ground and took the gold medal. Nishida defeated Fukumi at the 2008 Grand Slam of Tokyo, and now repeated this great performance. Asami is the 51st World Champion for Japan.

World Junior Champion Sarah Menezes won the second women’s medal for Brazil defeating the experienced 34-year old Frederique Jossinet from France. Jossinet could have been second ever oldest woman to win a medal at the worlds, after Isabel Fernandez in 2007. But the talented Menezes won her first senior world medal after finishing fifth last year in Rotterdam. What a success for Brazil that won silver by Mayra Aguiar U78kg.
Olympic Champion Alina Dumitru won her third World Championships bronze medal today. She defeated Chung Yung-Yeon of Korea in her last match.

Men’s U60kg
A tactical match between the reigning world champion Georgii Zantaraia of the Ukraine and Rishod Sobirov (UZB).
Sobirov was a continuous thread with his lifts in this field of exceptionally strong athletes. With 100 seconds to go Sobirov made a score which was first judged as ippon, but later reduced to waza-ari, so the match proceeded. But Sobirov was the most strong and ended the match by ippon with a hold down. Both exhausted athletes had a lot of respect for eachothers performances. Especially Sobirov was very strong the whole year winning the IJF Masters in Suwon in January, the Grand Prix in Tunis in May and the Grand Slam in Moscow in July. Zantaraia was less active this year and very exhausted this year after his great performances in 2009. He still won the Grand Prix in Düsseldorf in February and was fit again in August when he won the European Cup in Hamburg in August.
Rishod Sobirov is the first ever World Champion for Uzbekistan. Farkhad Turaev was the first finalist in 1999, and Abdullo Tangriev was able to win three bronze medals between 2003 and 2009.

Japan’s Hiroaki Hiraoka won the bronze by toppling Beslan Mudranov by an onorthodox shoulder throw. Although he wanted the gold, at least he was the best of the rest. Arsen Galstyan (RUS) took over Elio Verde in his bronze medal match and won the second bronze for Russia after Denisov U90kg.

Women’s U52kg
Another exciting final was the all Japan final U52kg with the amazing Misato Nakamura who leads the overall IJF World Ranking with the most points of everyone. Nakamura was facing her compatriot Yuka Nishida in the final and what a tension in the hall at that moment.
Both know each other extremely well and this resulted in a no score after five minutes fight. But Nishida seemed to be a bit more active in the first five minutes, but in the golden score both fighters were rewarded a penalty for inactivity. Nakamura put Nishida under more pressure trying to convince the referees in the last two minutes. But Nishida made one move, almost a point that may have been the decision for the three white flags in her advance after eight minutes.
Of 17 finals in this category since 1980, Japan won 4 of them. Nishida is the fourth winner after Kaori Yamaguchi in 1984, Noriko Narazaki in 1999 and Nakamura in 2009.

Natalia Kuzyutina won the bronze for Russia, the second of today, but still a bit poor for Russia compared to the successful World Championships last year. Maybe this is typical for the double entries this year, that Japan is the best country in terms of national competition.
European Champion Kuzyutina defeated Erika Miranda of Brazil for bronze.

Romy Tarangul couldn’t repeat her great bronze medal of last year but wasn’t able to stand the great point of Munkhbaatar Bundmaa of Mongolia against the German. Munkhbaatar is the second woman to win a medal at the World Championships after Erdenet-Od Khishigbat won bronze in 2005 in Cairo U57kg.

Men’s U66kg
The U66kg weight class was one of the most open divisions with surprising semi finalists. But today Japan’s Junpei Morishita was with head and shoulders above this group and deserved the gold medal.
In the final he defeated Brazil’s Leandro Cunha. After three minutes Morishita caused an explosion in the hall by a beautiful hipthrow, one of the best points in the final stage.
Morishita was fantastic today but had his hands full with Loic Korval in the semi final who gave excellent resistance. In overtime the condition of Morishita seemed to be better. But the match was one of the most exciting of the whole World Championships, what a thriller which was appreciated by the crowd with applause. The referees gave three flags to Japan.
Korval won bronze in his fight against Mirzahid Farmonov (UZB), a well deserved medal at this strong category. Not many people had to work as hard as Korval for this medal.

2009 World Champion Tsagaanbaatar Khashbaatar (MGL) was defeated in the quarter final by Junpei Morishita, the 2009 World Junior Champion. But Khashbaatar defeated European Champion Sugoi Uriarte for bronze. Uriarte could have won the only Spanish medal this championship. It’s the first time since 1995 that Spain didn’t win a medal at the World’s. Uriarte was runner-up last year in Rotterdam. Nonetheless Uriarte peaked really well this year with European gold in Vienna and a bronze medal fight at the World Championships.
Khashbaatar won his second back to back medal, but preferred another colour. Khashbaatar is the first of Mongolia to win two World Championships medals. He needed al forces to overcome the defensive style of Uriarte but succeeded after a long match by oseikomi.