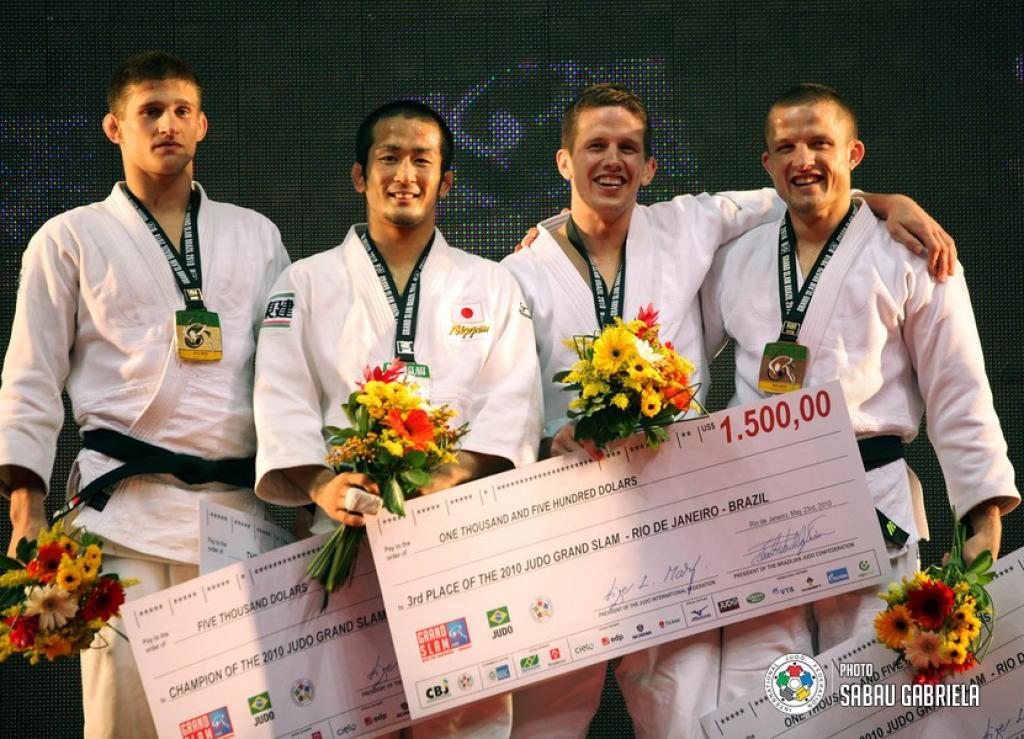 The Japanese women’s world champions showed their dominance in their categories today. The three world champions all won the title at the first day of the Grand Slam of Rio de Janeiro. Hiroaki Hiraoka (JPN) and Hiroyuki Akimoto took the title in the men’s division at the Maracañazinho Stadium.

U60kg
Hiraoka collected his first Grand Slam title in his career, although he won in Paris in 2008. The runner-up of the World Championships defeated Rishod Sobirov (UZB) who won the GP of Tunis two weeks ago. Today Sobirov (UZB) defeated the new European Champion Milous Sofiane (FRA) in the quarter final. Europe’s vice-champion Ludwig Paischer (AUT) lost to Jeroen Mooren (NED) who won the bronze today. Arsen Galstyan (RUS) took the second bronze when he lost to Hiroaki Hiraoka in the semi final.

U66kg
Alim Gadanov (RUS) prolonged his title in the category U66kg. In the final he beat the surprising Italian Elio Verde by ippon with a rare uchimata. Verde, the bronze medalist at the worlds in 2009 (U60kg) who defeated European Champion Sugoi Uriarte in the first round. Verde usually fights U66kg but very occasional at Italian Championships he tries the U66kg. Today he succeeded very well.
Gadanov, the number five of the 2008 Olympics defeated World Champion Khasbaatar Tsagaanbaatar (MGL) in last year’s final. Today the world champion was one of the victims of this heavy division when he lost to Loic Korval (FRA) who won the bronze.
Tunis GP winner Rok Draksic (SLO) was surprised by Sanjaasuren Miyaragchaa (MGL) who won bronze.

U52kg
A second title in the lightweights for Japan when World Champion Misato Nakamura followed the path of Fukumi, but than U52kg. Fukumi hasn’t lost for a long time in major events and won every major event since February 2009 including four Grand Slams, the master title and the World title.
Today she played Marie Muller in the final, but 24-year old Muller was actually today’s biggest surprise winning a very valuable medal for Luxembourg’s at major event. Muller won her fourth important medal, but this time in a heavily occupied tournament. Not even she reached the final, Muller also defeated double European Champion Natalia Kuzyutina (RUS) and world bronze medalist Romy Tarangul (GER) who won the bronze. Hongmei He (CHN) won the second bronze.

U57kg
Kaori Matsumoto (JPN), the winner of the GS in Paris and the GP of Düsseldorf took her third IJF title this year. Matsumoto won the final in Rio against Telma Monteiro (POR) who took the title last year and won her 20th international World Cup, Grand Prix or Grand Slam medal.

Matsumoto also beat the Olympic Champion Giulia Quintavalle (ITA) in the quarterfinal U57kg and Sabrina Filzmoser (AUT) in the semi final. Viola Waechter (GER) won the second bronze. She was the winner in a heavy block with Morgane Ribout (FRA) who was defeated by Irina Zabludina (RUS).

On Sunday the heavyweights are on the tatami.