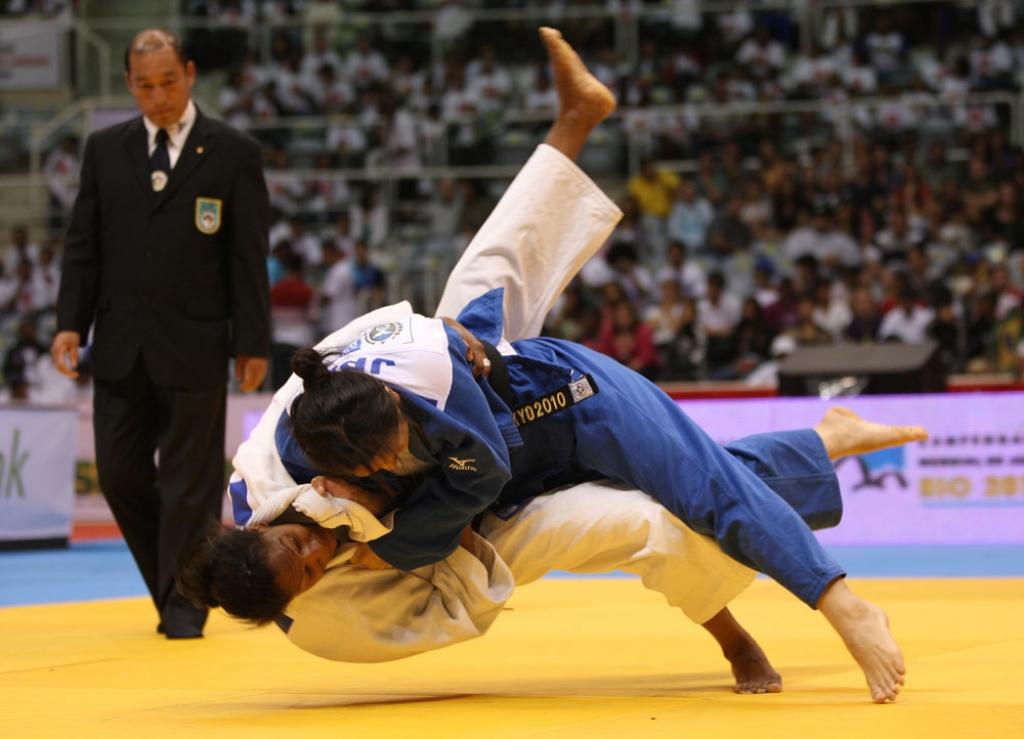 Japan was the big winner of the Grand Slam in Rio de Janeiro. With eight gold medals the dominancy was equal to last year, also eight times the national anthem of Japan.
Brazil however celebrated three gold medals today. Especially the U81kg category was domain of Leandro Guilheiro.

Text by IJF Media Team
What a spectacular competitor he is! Guilheiro scored waza-ari after three and a half minutes of fight against Russian Ivan Nifontov. A few seconds later, Guilheiro launched again his devastating shoulder movement, but for no score that time. Only a few seconds were left. Without escaping from his opponent grip, Guilheiro controlled the match and won the first gold medal for Brazil on the occasion of the second day of competition at the Judo Grand Slam, Rio 2011. Only the beginning of the Brazilian harvest.

In the first semifinal of the day, Leandro Guilheiro (BRA), number 1 seeded and number 2 in the world ranking list was opposed to Olympic gold Medallist Elnur Mammadli, from Azerbaijan, a fight which promised to be explosive and it was the case, even if both fighters were not capable of scoring. At the end, Guilheiro won by penalty, but what a rhythm! The second semifinal of the men’s -81kg had a perfume of Russian Championship, the two representatives of Russia being qualified against one another, but only Ivan NIFONTOV arrived on the tatami and was therefore qualified for the final. Earlier during the day, Euan Burton (GBR), ranked number 4, was eliminated during his first fight by a combative Joachim Bottieau, from Belgium.

Women’s -70 kg: Gold for Kunihara!
After only a few seconds, the final match between Kunihara and Alvear gave the impression that it would not last until the end. In less than one minute, Alvear had already scored a waza-ari and keeping going with the same rhythm, both fighter were looking for the perfect movement. 1:43 after the first Hadjime, Kunihara engaged a powerful morote-seoi-nage for a clear ippon.
During the preliminaries, three over four of the best seeded athletes (Yoriko KUNIHARA, Kelita ZUPANCIC and Yuri ALVEAR) could make it through the first combats and entered into the final block, the only surprise coming from the defeat of Cecilia Blanco, eliminated by Maria Portela (BRA), who in front of her public, found enough energy to counter all the attacks of the Spanish competitor. Only a few seconds before the end of the fight, Blanco who was still in the lead, made one more false attack. It was too much and she was logically penalized. It is not that time that she will add a 25th medal obtained during a World Judo Tour event, to her already long prize list.

Men’s -90 kg: Ono is back!
It was the comeback of Takashi ONO, here in Brazil on the occasion of an IJF event. Having lost his first position in the World Ranking list to the benefit of Ilias Iliadis (GRE) two weeks ago in Moscow, ONO was decided to get it back. It has been a very tactical final, between Ono and Gonzales Montero. None of the two champions being able to score, Ono simply won by penalty. The new leader of the world ranking list (with his win, Ono retakes the lead) didn’t show extraordinary judo today but he conscientiously worked all day long to obtained a sixth gold medal on the occasion of a Grand Slam.
On his way to the semifinal, he nevertheless had to strongly employ himself to win his three fights, the quarterfinal being won only by referee decision. In the semifinal he was opposed to last year winner, Hugo Pessanha (BRA) and after the half of the match, he finally could launch a solid o-soto-gari, which counted for ippon. In the second semifinal, Brazil was again present with a fantastic Tiago Camilo, who won all his fight by ippon before the half of each combat. The second qualified athlete was more like a surprise. Indeed, Elkhan Mammadov, winner of the World Masters, earlier this year, was beaten by Asley GONZALEZ (CUB), only ranked 31st in the world. In the semifinal, Tiago seemed to have the ticket for the final in his hands, but only three seconds before the gong, Asley GONZALEZ again created the sensation and scored ippon.

Women’s -78 kg: A big heart for Aguiar
No Chance for Harrison. In the final of the women’s -78kg, she couldn’t score one single point, whereas her opponent, under the hurrays of the public, scored a first yuko, then a waza-ari and concluded the show by a ippon. She then could show to the public her hands joined in a heart, the heart that she had all day long to obtained that great victory.
The first semifinal was an interesting one, between Kayla Harrison, the only 20 year-old young lady from USA and already world Champion (Tokyo 2010) and Lucie Louette, who was desperately trying to taking the lead of the category for several events. The problem for the French was in the second part of the draw, and that problem is called: Audrey Tcheumeo. The French athlete, also very young (21), looks like the ogre of the category since she seems to be unbeatable. But in her semifinal, Tcheumeo was opposed to Mayra Aguiar (BRA), who was in from of her public and who fought until the very last second to score a waza-ari, synonym of qualification for the final. A little bit earlier, Louette had an other problem, called Harrison. After a solid match between the two fighters, Louette, again as in Baku, did a big mistake in ne-waza and get caught by the American.

Men’s -100 kg: No Worries for Anai!
When the final begun between ANAI and SAMOYLOVICH, the Russian fighter seemed already very tired after a very long day of competition. Apparently injured, he was almost fighting on one leg. Nevertheless, he tried his best to put to solid Anai out of balance, but didn’t succeed. Anai won in Rio his fourth Grand Slam.
Ariel Zeevi (ISR), for sure, wanted again to reedit his two-weeks time performance, when he won the Judo Grand Slam in Moscow. But, that was not the idea of world bronze medallist, from France, Thierry Fabre. After a tough match, Fabre won by yuko, sending Zeevi back home this time with no medal. In the semifinal, Fabre was opposed to world number one and world champion, Takamasa Anai (JPN) and he couldn’t do much to block the outstanding right handed uchimata of the world number one Anai. The second semifinal was all european with Sergey SAMOYLOVICH (RUS) and Elco VAN DER GEEST (BEL). The combat was won by SAMOYLOVICH.

Women’s +78 kg: Easy Day for Tachimoto!
Only 42 seconds were necessary to Megumi Tachimoto, number one in the world ranking list to score ippon on her opponent from Turkey, Gulsah KOCATURK.
Actually, she had a pretty easy morning session, as she only had to compete one time to enter the final block, where her opponent had to fight twice. She then looked fresher than Zambotti and could win with two penalties. In the second semifinal, Rochele Nunes represented Brazil against Gulsah KOCATURK from Turkey but after one minute, she was severely thrown with a left handed o-soto-gari for ippon.

Men’s +100 kg: 100% Brazil!
A few days ago, Joao Gabriel Schlittler was even not selected to compete in Rio. But the injury of one of his teammates, opened the doors of the tournament to the Brazilian heavy weight and he didn’t let the chance going away. For his first fight, he sent back home, Suzuki, who was definitely expecting a better result here. Scoring two more ippon, during his next combats, Schlittler met Janusz WOJNAROWICZ (POL) in the first semifinal of the last category of the day and won after a very long fight when his opponent, totally exhausted, surrendered. He was a little later joined by his teammate Hernandes, who defeated Barna Bor in the semi-final.

You can review the results here: