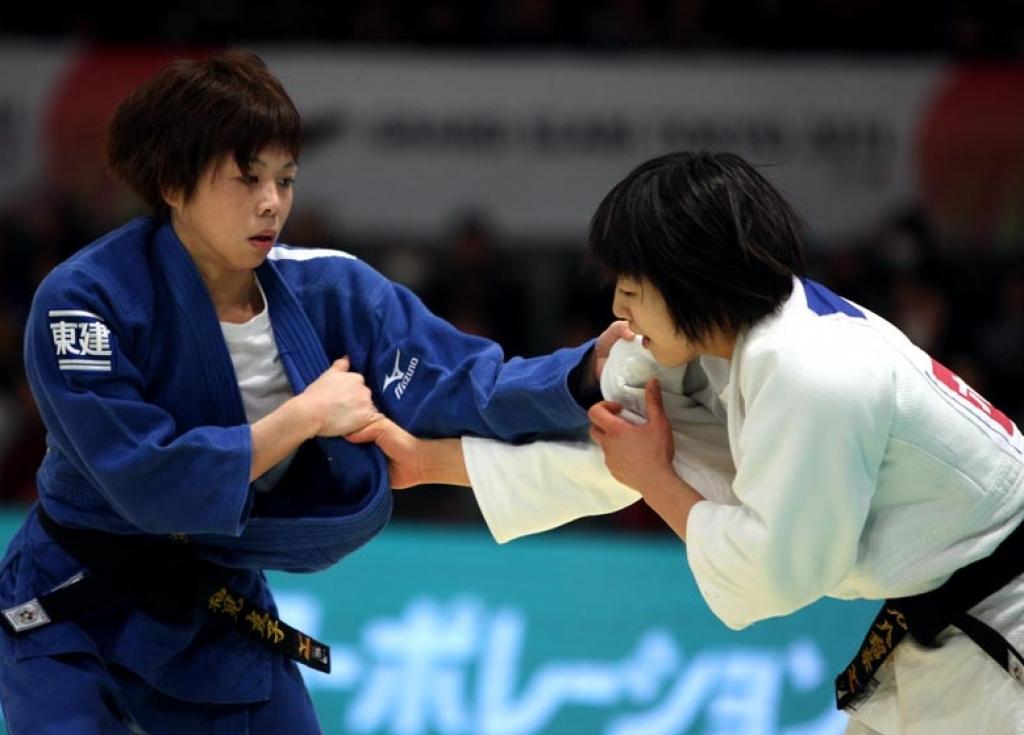 2011 has been a tough year for Japan. Struck on March 11 by a devastating earthquake followed by a terrible tsunami, the country is still very affected and is gradually rebuilding the devastated areas. Therefore the organization of the Judo Grand Slam, Tokyo 2011, is a special moment for all the judoka around the world.

Beyond the sports dimension of the event, which is not negligible since this is the last grand slam of the season (after Paris, Moscow and Rio) and since many points will be awarded for the Olympic qualification, the arrival of nearly 400 competitors from 62 countries, was a strong sign of support from the world of judo towards the entire Japanese judo family and Japanese people as a whole.

At the first day of the Grand Slam in Tokyo the home team won the full sweep winning all four categories. The women’s final U48kg was not a surprise with the two strongest women on earth in this division World Champion Haruna Asami and Tomoko Fukumi who won the Grand Slam the last three editions.
It was however world champ Asami who won this battle won her third Grand this year after Paris and Rio earlier this year. What a year she has.
Belgian Charline van Snick was the only European medal. She took revenge for her loss at the World Championships in Paris for bronze against Eva Csernoviczki (HUN). However she lost her semi final against the later winner Asami.

Takumi Miyakawa won the women’s U52kg against Priscilla Gneto of France. Miyakawa defeated five opponents, in the first round against world bronze medallists Ana Carrascosa. Not a single Asian opponent for Miyakawa who defeated 4 Europeans. 20-Year old Gneto did well and won her second Grand Slam medal this year, winning bronze in Paris. In May she won the Grand Prix in Baku and one year ago in Qingdao. Miyakawa is just 17 years and another phenomenon. She won the World Junior Champion in November.

In the men’s division Hirofumi Yamamoto prolonged his last year’s title in Tokyo. In the final U60kg he defeated his compatriot Ryo Kawabata. Yamamoto also won the World Cup in Budapest and the Grand Slam in Rio this year. All medals went to Japan in this category. Ilgar Mushkiyev was the only European to reach the quarter final.

Musa Mogushkov was Europe’s best performing man today. He lost the final U66kg against Tomofumi Takajo (JPN). Although he defeated world champion Ebinuma in the semi final he couldn’t prevent teenager Takajo from winning. Again a second position for the Russian, just like last year when he lost to Masaaski Fukuoka. Mogushkov built out his lead in the World Ranking U66kg. With Riner and Iliadis he’s the only European male leader of the IJF World Ranking.