Japan rules at third day of the Worlds 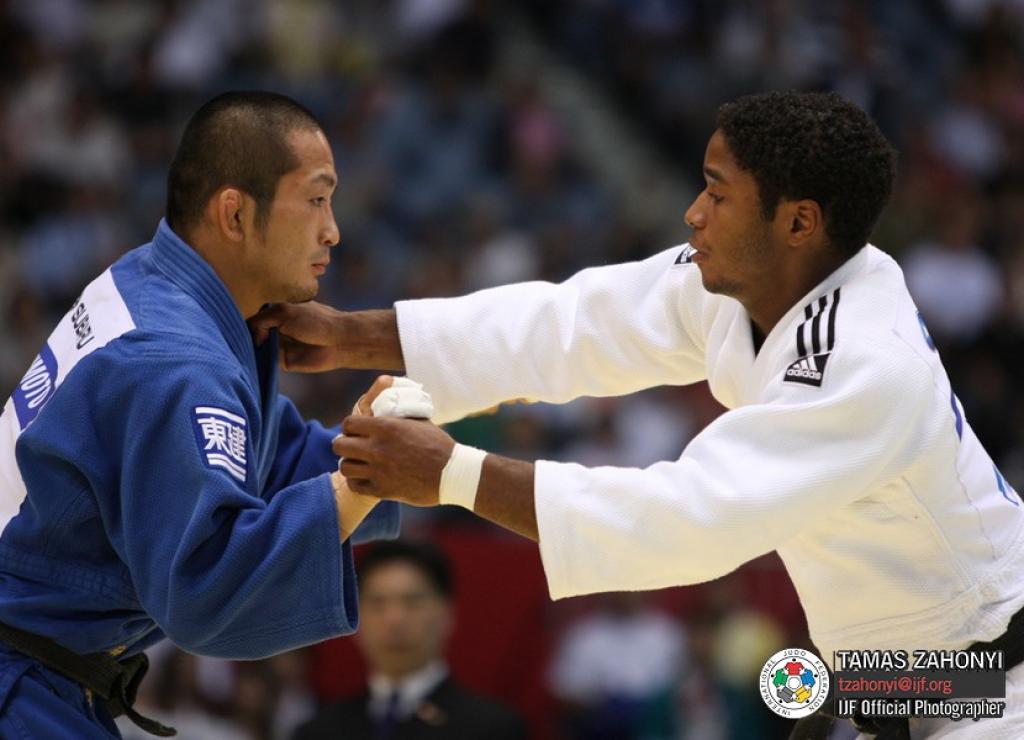 What a great day for Japan winning all three world titles today. Although Japan was favourite for all categories, it is still amazing to see the dominance of this team today in Tokyo. Yoshie Ueno prolonged her title of last year in the all Japan final. Japan now leads the tally with five gold medals, two silver and five bronze medals.

The score was 0-0 after five minutes and a golden score followed. The more aggressive Matsumoto benefit from a slight slip of Monteiro 23 seconds for the end in extra time.

Matsumoto collected the first ever world title for Japan in this category. It’s incredible to believe that she is the first since 1980, in this mainly ‘European’ category. Chiyori Tateno was the only to reach the final in 1993. Kie Kusakabe won bronze in 2001, Aiko Sato won bronze in 2007 and Matsumoto finished fifth last year in Rotterdam. But this year she dominated this category despite the European competition.

European runner-up Sabrina Filzmoser (AUT) won the bronze medal against Yurisleidis Lupetey (CUB), the 2001 World Champion.
European Champion Corina Caprioriu (ROU) was behind from the beginning against Ioulietta Boukouvala (GRE) who took the bronze, a second medal for Greece and the first ever women’s medal for Greece at a world championships.

Men’s U73kg
The final U73kg between the undisputed favourite Hiroyuki Akimoto and Dex Elmont was dominated by Japan. Akimoto defeated the Dutchman by a hold down. Elmont seemed to have grip on the attacks of Akimoto but he showed the difference on the ground with a great turnover and controlled and flipped Elmont to the ground for a lock. Great groundwork by Akimoto.
Hiroyuki Akimoto overcame Wang Ki-Chun (KOR) in a cracking semi final by a unanimous decision 3-0.
Akimoto also defeated his countryman Yasuhiro Awano in the quarterfinal. Awano didn’t have to fight against Nyam-Ochir Sainjargal (MGL) for bronze who gave up with a shoulder injury in advance. Awano took a second medal for Japan in this category.
All favourites reached the semi finals, Akimoto, world champion Wang Ki-Chun, Nyam-Ochir Sainjargal (MGL) and Dex Elmont who was the greatest surprise of today. He beat Mansur Isaev (RUS) in the quarter final, but Isaev is apparently not a problem for the Dutch European runner-up, who beat Isaev for the third time in a row.

Isaev led an exciting match for bronze against 2009 world champion Wang Ki-Chun (KOR), but Wang took over the initiative by waza-ari and defeated 2009 bronze medallist Isaev in the last minute.

women’s U63kg
What a great day for Japan with so many medals. As last match of the day an all Japan final U63kg. Yoshie Ueno was the expected finalist in this category, but Miki Tanaka performed well today and reached the final as well. Tanaka reach the final by wins over Ramila Yusubova (AZE) in the quarter final and Yaritza Abel (CUB) in the semi final.

In the final against Ueno the score was still 0-0 after five minutes fighting and the golden score followed between the numbers one and two of the All Japan Judo Championships this year. It was Ueno who won the title in April and this time a decision had to be made by the referees for this match. Ueno secured the gold by a 3-0 decision.

The 27-year old Ueno prolonged last year’s title of Rotterdam today in her own country. The 22-year Tanaka debuted with silver and completed the success today of Japan, that dominated the medal tally.
Japan rules in this category that started at the 1999 World Championships with Keiko Maeda taking the gold for Japan in Birmingham. Ayumi Tanimoto won the Olympic title in 2004 and 2008, but never won the world title like Ueno. Tanimoto won three medals in 2001, 2005 (final) and 2007, but Ueno now has a substantially bigger success at Worlds Championships.

In the semi final Ueno faced severe competition by Anicka van Emden. Ueno could make the difference by a 3-0 decision via hantei. Earlier this year she had lost to Van Emden in Paris. The Dutch had to fight Ramila Yusubova (AZE) for bronze. The Azerbaijan woman upset Van Emden (NED) by a splendid ippon. Van Emden defeated her twice previously, but this time Yusubova completely surprised the Dutch at her debut at the World Championships. Van Emden previously defeated her compatriot and 2009 runner-up Elisabeth Willeboordse. Yusubova successfully survived the repechage after she had lost to Tanaka (JPN) in the quarterfinal. Yusubova collected the second women’s medal for her country Azerbaijan in a row with her win over Van Emden. Last year Kifayat Gasimova won a bronze medal for Azerbaijan, which is a good trend for women’s judo.
Yusubova ended a great day that started with a victory over Germany’s medal hope Claudia Malzahn.

Cuba’s Abel Yaritza collected the bronze by a counter of Alice Schlesinger (ISR). Yaritza was the winner of a heavy pool with Gevrise Emane (FRA) who was kicked out of the tournament in the first round by Urska Zolnir who lost her bout against Abel in her second match.