Japan takes the double at the SportAccord World Combat Games 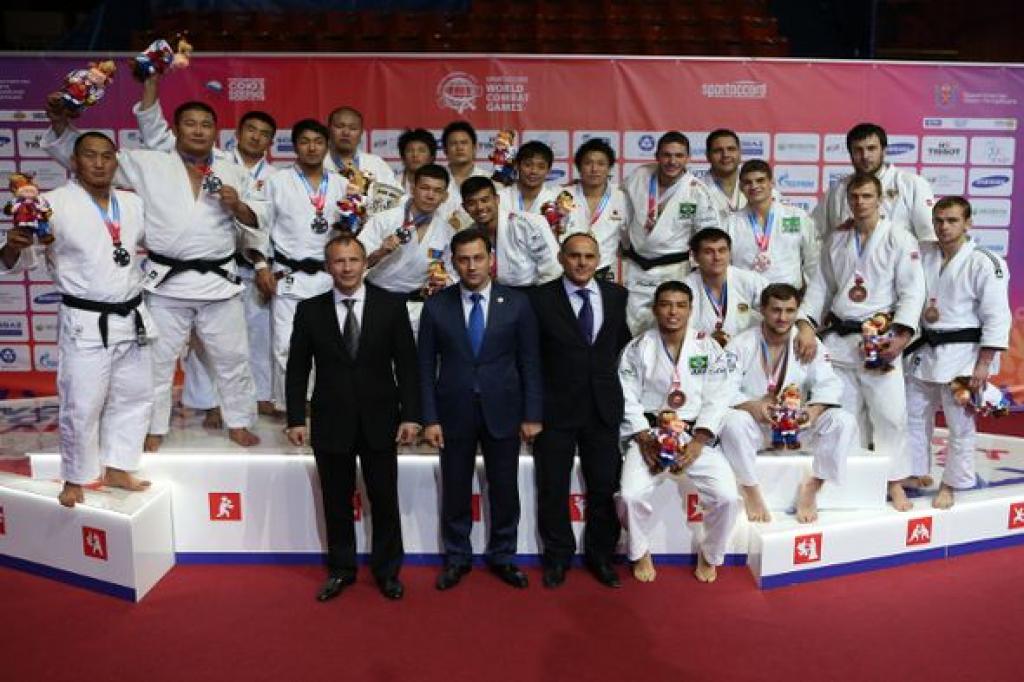 The second day of the 2013 World Combat Games saw the judo team competition come to a blistering close with the men’s team event on Sunday at the St Petersburg Sports and Concert Complex.

Japan were crowned women’s team champions on day one and they secured a fine double by clinching the men’s title today as the highly-popular team judo format was once again shown to a global audience. As the stars of the sport unite to represent their country, fans become a crucial part of the event as the fate of their country and the complexion of the tie can change in an instant. Judo has now starred at both editions of the World Combat Games, the 2010 launch in Beijing and the 2013 spectacle as one of the 15 sports in the spotlight in Russia. 2013 World Team Championship winners Georgia were in action along with Uzbekistan, Japan, Brazil, Russia, Mongolia, Germany and France. Ahead of the final block, Russia’s Olympic champions Arsen GALSTYAN (-60kg), Mansur ISAEV (-73kg) and Tagir KHAIBULAEV (-100kg) graced the competition tatami after their morning training session to host their second masterclass after Saturday’s highly-successful session. The children were from a local club in St Petersburg which was formed by the late Russian coach Anatoly RAKHLIN, a former judo mentor to Russian President Mr. Vladimir PUTIN. World Combat Games and Russian Judo Federation General Team Manager Ezio GAMBA said: “I was impressed with the youngsters, their technique was very good for their age, they did really well. Our athletes enjoyed the session and the opportunity to meet their fans.” Japan celebrated a team double as their men’s team matched Saturday’s golden showing from their female counterparts. Japan met Uzbekistan in the first semi-final and dismissed their opponents with a judo clinic. In the second semi-final Mongolia outlasted Germany in a nail-biting match as they won the last contest to snatch a 3-2 triumph and a place in the final. Finals The final contest would prove decisive as the teams entered with two wins apiece. The fate of both countries was in the hands of seasoned heavyweights as Batsuuri NAMSRAIJAV (MGL) and Andre BREITBARTH (GER) went toe-to-toe. Former Asian Championships bronze medallist NAMSRAIJAV sent his country through with a yuko score. 2013 World Team champions Georgia fell in their first match against Uzbekistan who grinded out a 3-2 victory. Ruthless Japan proved their title credentials by routing an out-of-sorts Brazil 4-1. Hosts Russia met Mongolia in the third quarter-final. 2013 World Team bronze medallists Germany showed their mettle as they produced a come-from-behind win against a stuttering French team. France raced to a 2-0 lead with wins from Kilian LE BLOUCH (-66kg) and Jonathan ALLARDON (-73kg) and were on the brink of a spot in the last four. However, Germany’s resolve countered for everything when Alexander WIECZERCZAK (-81kg) inspired a comeback. Aaron HILDEBRAND (-90kg) resorted parity before Andre BREITBARTH (+90kg) completed the magnificent comeback with a battling performance against Jean Sebastien BONVOISIN (+90kg) with a waza-ari the difference after five minutes after of heavyweight action. Bronze medal matches Russia joined Brazil on the medal podium as heavyweight Renat SAIDOV (+90kg) earned the admiration of the crowd and his teammates as he emphatically conquered Boltaboy BOLTAEV (+90kg) by ippon to settle a 3-2 win for the hosts. Final Results 1. Japan 2. Mongolia 3. Brazil 3. Russia 5. Germany 5. Uzbekistan 7. Georgia 7. France