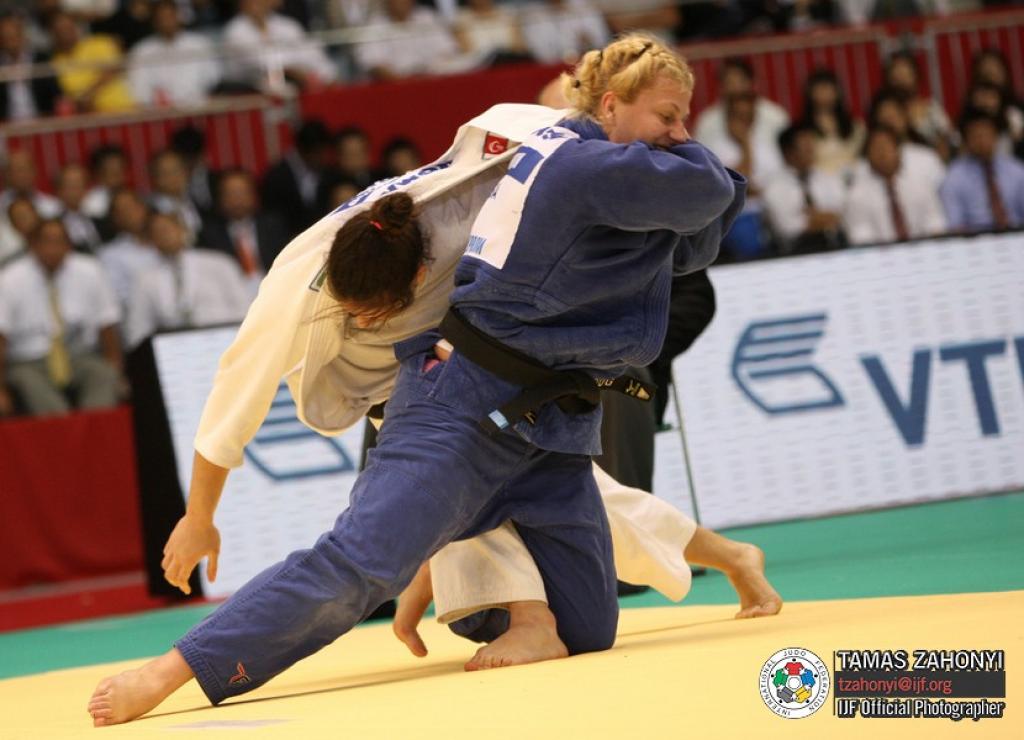 Japan won two out of four medals at the first day of the Judo World Championships. They may have expected more with a huge number of favourites. But Mika Sugimoto took the first ever title in the plus category since the start of the first judo worlds in 1980. Since than China took 8 out of the 17 gold medals. Now Japan is finally on that list.

U100kg
Takamasa Anai was too strong for Dutch Henk Grol. In the final Anai defeated Anai the Dutchman for the first time, with a penalty difference for impassivity for Olympic bronze medallist. Grol lost the final last year in Rotterdam as well where Anai took the bronze. Now his fans could celebrate his gold medal. He succeeded to take back the title that his coach Inoue won in 1999, 2001 and 2003. In 2005 Keiji Suziki took the title. Today he lost in the first round in the plus category. In 2007 Brazil’s Luciano Correa won this U100kg category and last year it was Maxim Rakov to defeat Grol.
Grol defeated European Champion Elco van der Geest (BEL) in the second round today. Van der Geest who beat Anai in Rio was one of the favourites. Grol beat 2009 world champion Maxim Rakov (KAZ) in the quarter final and Olympic Champion Naidan Tuvshinbayar (MGL) in the semi final, but wasn’t strong enough against Anai in the final.
Oreydis Despaigne won the bronze for Cuba. Thierry Fabre (FRA) was able to beat Olympic Champion Naidan Tuvshinbayar (MGL) for bronze.

U78kg
Another great surprise was the gold Kayla Harrison in the U78kg class. Harrison won the gold in the final against Mayra Aguiar (BRA). Aguiar was the first Brazilian woman to reach a final. Kayla Harrison’s succes was celebrated by US coach Jimmy Pedro who won world gold in 1999.
Harrison is the first American to win the world title since AnnMaria Burns won the gold in 1984. The last American to reach the final was Burns’ daughter Ronda Rousey in 2007.
“I’ve been training for this for a long long time and I’ve been dreaming of this since I was a little girl,” Harrison said. “It hasn’t sunk in yet. It’s an amazing feeling. It’s surreal. And everyone’s been amazing. My teammates, my coaches… Everyone’s been amazing and I’m really thankful.”
Harrison is the youngest World Champion at this event so far aged 20.

O100kg
In the over 100kg division Teddy Riner (FRA) not surprisingly qualified for the semi final. Riner will face Kazuhiko Takahashi, Japan’s frontliner. Japan’s Keiji Suzuki, the ultimate challenger of Riner lost in the first round against Janusz Wojnarowicz (POL). In this pool Matthieu Bataille (FRA) was the strongest. He defeated Grim Vuijsters (NED) in the quarter final. Bataille will face Andreas Toelzer (GER) who beat Islam El Shahaby in the quarter final.