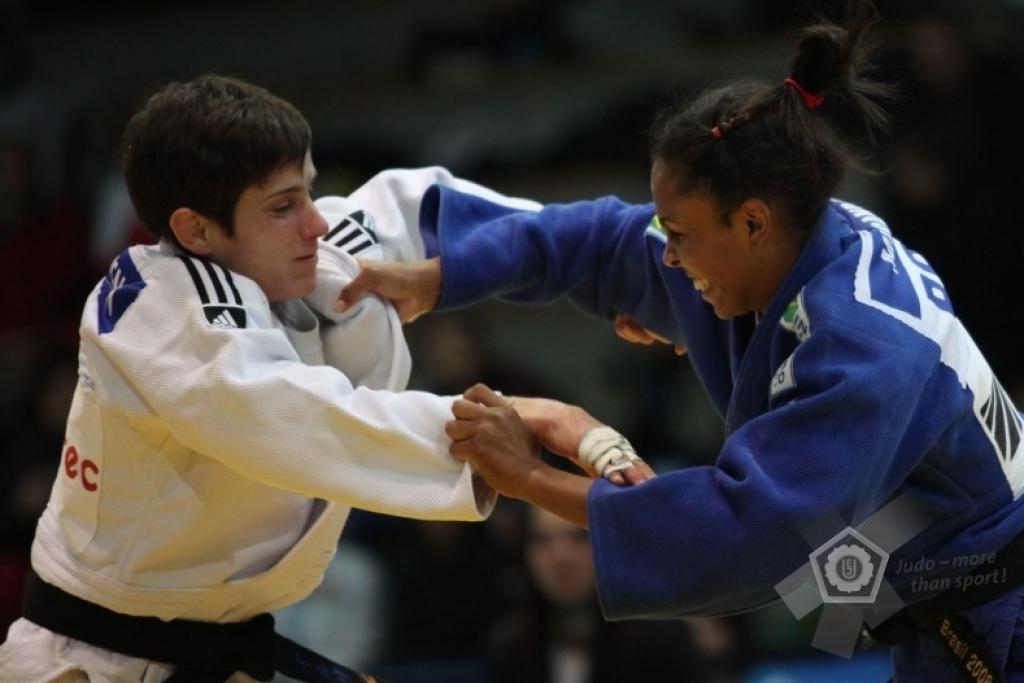 Japan was the big winner today at the first World Cup for women in Oberwart in Austria. Japan won two gold medals at the first day as well as silver and two bronze. Belgium and China won the other two titles.
In the lightweight category Kaori Kondo defeated another Asian opponent, last week’s winner in Paris, Munkhbat Urantsetseg of Mongolia. Kondo is the silver medalist of the Grand Slam of Tokyo. More than a year ago she also defeated the Mongolian fighter at the Korean Open.
Kondo came over European U23 Champion Amelie Rosseneu in the quarter final and Nataliya Kondratieva (RUS) in the semi final. Kondo didn’t compete in Paris last week. Kondratieva finished third as well as Summeye Akkus (TUR) who beat Brazilian Taciana Lima with a superb take over for bronze.

Ilse Heylen was successful U52kg. The 33-year old Belgian defeated another Brazilian, Erika Miranda, on the ground. It was Heylen’s 11th victory in a World Cup, but she had never won the Austrian Open. Her first win was in 1997 and since 2005 she won a World Cup once every two years. She is now the second oldest gold medalist in a World Cup or Grand Slam this year. Only tea Donguzashvili (RUS) was older (34) when she won in Sofia two weeks ago. 20-year old Mariia Buiok (UKR) won bronze together with Lucia Chytra (CZE) who won her second medal at a World Cup.

Another Japanese judoka, Aiko Sato who lost the final at the Tournoi de Paris last week, was now victorious in the final. Sato, who represented Japan at the Beijing Olympic Games, won the final against Brazilian Ketleyn Quadros. Brazil has not won any gold medal yet at a World Cup: four lost finals, three bronze. But those 7 medals are much more than the two of last year in the first 6 weeks.
Nozomi Hirai (JPN) and Shareen Richardson (NED) won bronze.

Surprisingly the Japanese can also loose. Kana Abe lost her final in the golden score against Chinese Lili Xu. Last week Xu lost her final at the Grand Slam of Paris against Gevrise Emane (FRA).
The Japanese have many strong judoka in this category but incomparable to the dominance of Yoshie Ueno and Ayumi Tanimoto, Ikumi’s sister who became third today in Oberwart together with Russian Marta Labazina.

In Oberwart 190 athletes of 37 countries participate in the World Cup.
This World Cup well prepared by the brother Martin and Roland Poiger
of the local judo club, were honoured by Hans Nissl, the prime
minister of the county Burgenland, and the major of Oberwart;
Gerhard Pongracs.