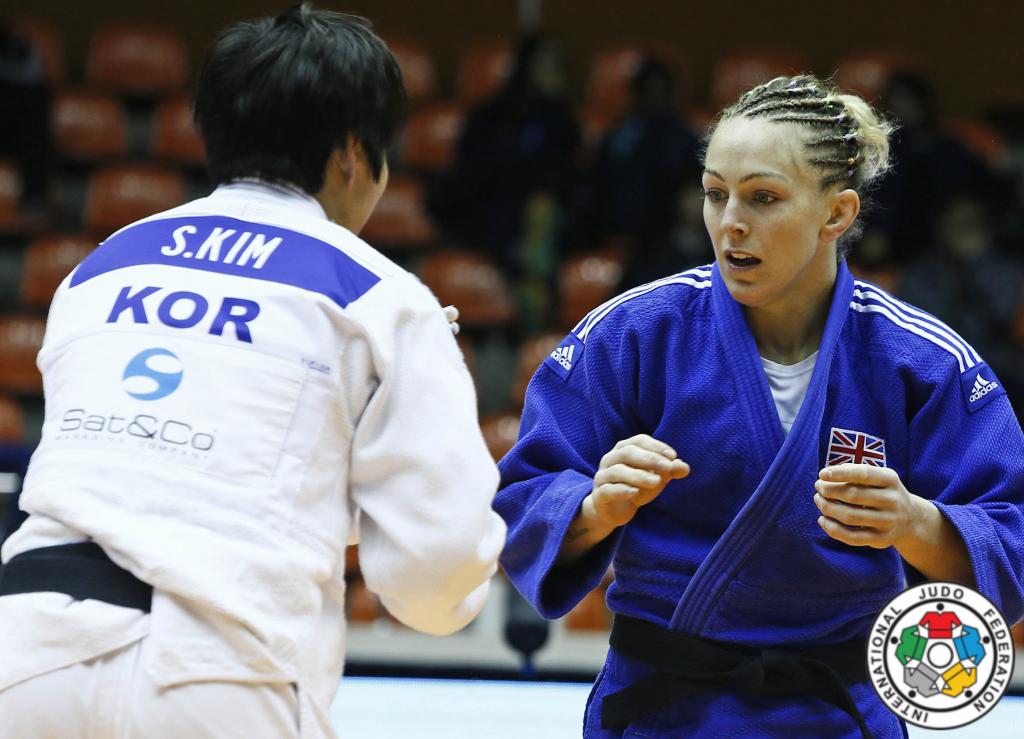 It is natural and unsurprising during a long judo career that athletes should face one another again and again. In the case of Sally CONWAY (GBR) three of her four opponents today were athletes who not only had she fought previously, but also against whom she had losing records. It must be particularly pleasing for the British fighter to have defeated all three on her way to taking the gold medal in the  -70kg category on day two of the Jeju Grand Prix.

In contrast to what was to come (after a first round bye) Conway’s opening contest was a first time meeting against relative newcomer 22 year-old Iana KRIUKOVA (RUS) whom she threw with o soto gari for waza ari before securing ushiro yoko shio gatame to end the contest.

Linda BOLDER (ISR) was Conway’s quarter final opponent and it proved a tough battle with neither fighter able to come up with a positive score. In the end it was Conway who, having collected less penalties than Bolder, went through to the semi final whilst at the same time bringing her personal score with Bolder to 3-5.

Conway’s semi final opponent was three times Asian champion and home favourite HWANG Ye Sul (KOR). But Hwang, after injury and very little competitive judo in the past two years, is not quite back to her best that saw her with a fifth place finish in London in 2012. It was Conway who with a little under a minute left to go in the contest was able to turn Hwang over in newaza to secure jujigatame for ippon bringing her personal score with Hwang to 2-3

In the final it was KIM Seong Yeon (KOR), the second and at present the more difficult of the two Koreans that Conway had to face and to whom she had lost in their two previous encounters.  On this occasion Conway used her excellent control in newaza to eat up most of the clock and , at the end of the contest the Korean having collected one shido, the advantage went to Conway as well as the small matter of the closing of the personal gap to 1-2.

Conway came into the event seeded number three and when asked about any advantage in being seeded so highly in Jeju she answered, “There are times when one feels an advantage at having a bye in the first round. But, to be honest, your next opponent could be well warmed-up from already having fought and be in contest mode, so it’s not always the case.” With regard to the quality of opposition in Jeju Conway added, “This was a good category that included some of the world’s top players. So I’m glad to have come out on top and come away with some important wins.” As for Conway’s plans for the near future she said, “I’ll be going to Japan for the Tokyo Grand Slam and then staying on for the training camp.”