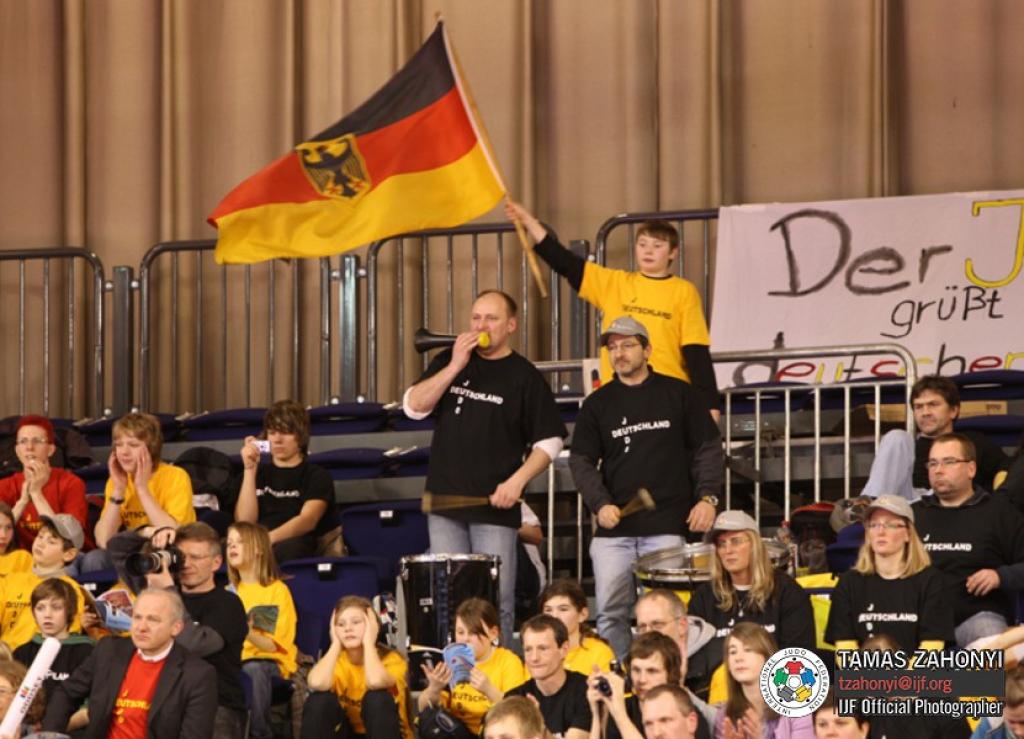 Heide Wollert set the Philipshalle in flame today when she beat Ruika Sato by ippon in the final U78kg of the Grand Prix in Düsseldorf. Wollert is now the most successful in World Cups on home ground. Wollert won her 18th World Cup medal in Düsseldorf in her career and entered the top 5 of most successful German judoka ever since 1989 when the World Cup started as A-tournaments.
Wollert won the tournament, previously held in Hamburg in 2005 and 2006, and won the bronze in 2008, but today she received the gold medal from German Federation President Peter Frese.
It’s the second German title this weekend after Claudia Malzahn won the U63kg category.

Kayla Harrison (USA) won her second IJF international medal after winning bronze in Belo Horizonte last year. Natalia Kazantseva (RUS) could pick up the bronze after she was picked up by Heide Wollert in an immediate take over in the semi final.

Anai shows wins strong category
The U100kg weight class had an absolutely spectacular line-up.
Lukas Krpalek (CZE), the reigning double World junior Champion was the winner of a spectacular block with Elmar Gasimov (AZE), the current junior European Champion, who defeated Naidan Tuvshinbayar (MGL), the current Olympic Champion. But Gasimov lost to Hae-Tae Hwang (KOR), the 2003 World Champion. Krpalek beat 2004 World junior Champion Jevgenijs Borodavko (LAT) and Hwang in the quarter final.
Krpalek beat Elco van der Geest (BEL), the winner of the 2010 Grand Slam of Paris, in the semi final.
The other final was between Takamasa Anai (JPN), the world’s number 3 in Rotterdam, who defeated his opponents today fast and efficient. And 2007 World Champion Luciano Correa (BRA) who won the block with World bronze medalist Darwish (EGY) in it who lost to Roman Polosin (RUS) who was in a good shape today, but couldn’t defeat Correa. Correa however lost in two minutes to Anai who showed his great left uchi-mata again to many of his opponents. But in the final Krpalek brutally took the lead but in the end Anai took over the match on the ground and finished Krpalek with an oseikomi.

Men’s U81kg
Two Koreans had to fight each other in the semi final U81kg, but they didn’t give much away, although finally Kim Jae-Bum defeated Song Dae-Nam. In the final though Kim faced Euan Burton (GBR) who’s in a good shape for the last 9 months, but was behind the whole match which was comfortable for his opponent Kim who took the only golden medal for Korea this weekend. Kim beat the Brit beat earlier in the final of the Tokyo Grand Slam. After a close five minutes, the fight ended on penalty points, Burton receiving three penalties to Kim’s two.
“Being left to the referee’s decision is never the best way to win or lose. But I proved again that I can do it at the top level but losing in a final is always a disappointment,” Burton said.

Women’s U70kg
U70 Kilogram another Japanese won the Grand Prix. Mina Watanabe defeated her compatriot Yoriko Kunihara (JPN) in the final to win the gold.

Women’s O78kg
But in the women’s heavy weight category Japanese Megumi Tachimoto seemed to loose her match against Eva Bisseni (FRA). The French led the match but in the third minute Tachimoto attacked Bisseni after she was out of balance with a brilliant left throw.
German Franziska Konitz had lost to Tachimoto but won the bronze together with Lucija Polavder (SLO).

El Shehaby won his second Grand Prix in his career. In 2009 he won the GP of Abu Dhabi. But El Shehaby is the first to win two international tournaments for his country. Egypt won 5 international IJF events in total. Heba Hefny as only woman in 1995 and the current group of talents Hisham Mesbah (U90 Qingdao 2009), Ramadan Darwish (U100 Qingdao 2009) and Islam El Shehaby makes the total counter to five.

German Robert Zimmermann had three great wins today, but could only stay on his foot until halfway the match in his semi final against Keiji Suzuki (JPN), but did win a great bronze medal. He shared the medal stage with Zviadi Khanjaliashvili from Georgia.

Japan clearly topped the medal tally with six titles. But home country Germany enjoyed the two women’s medals and won three bronze on top of that. Mongolia won the third place with their golden outperformers Tsagaanbaatar and Nyam-Ochir. Two unique gold medal for African countries and in total 24 out of 45 participating countries took a medal which is a good sign for international judo.