"JUDO IS JUST SO DIFFERENT TO ANY OTHER SPORTS, IT IS TRULY MORE THAN JUST A SPORT ..." 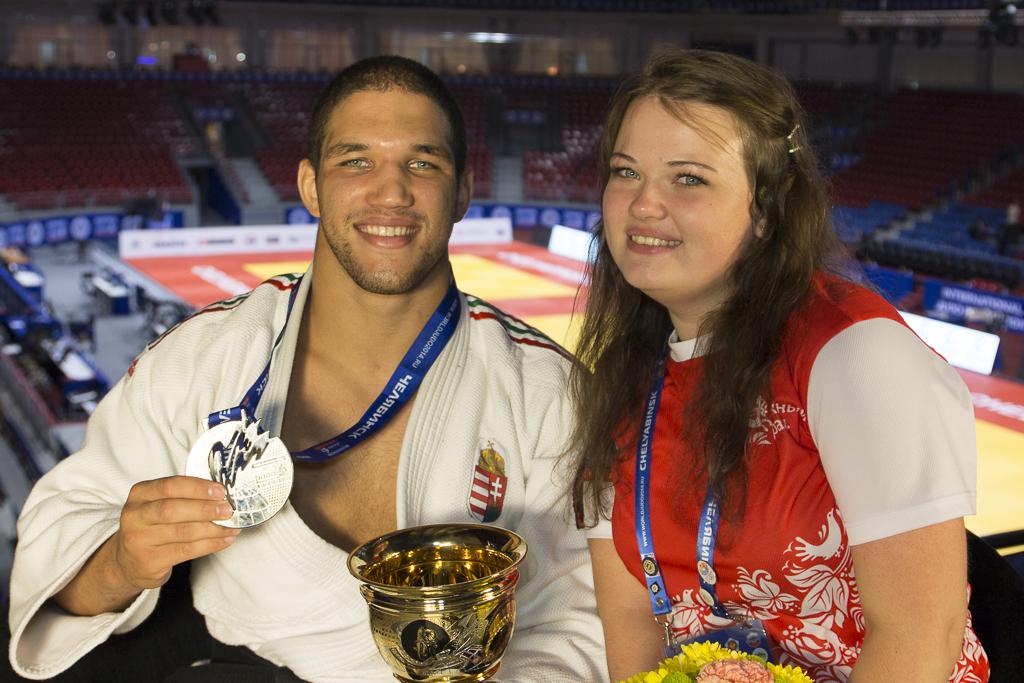 Hundreds of volunteers were at present to assist the throng of world class judokas at the 2014 Wolrd Championships in Chelybinsk, Russia.

The majority of the volunteers found this exciting role via a social network called ‘VK’ which stands for ‘VKontakte’ in their language. By the time of the event, 800 candidates, out of the total number of 1300 applicants, were able to complete successfully all the different exams to join the team.

Anna Diachkova, 20, was one of the inspired volunteers, however it wasn’t the first time for her to witness all the action close to the tatami. “I was the mother of the Hungarian team during the tournamnet.” – she said. Mother? – instinctly I asked the question. “Yes, I say mother because the way I pronounce my name in Russian is ‘Anya’, which means mother in Hungarian.” – she smiles. “I believe that the key roles of a volunteer are to cheer the team on, support them, share the tears and smiles with them…just like a mother” – she added. Anna wasn’t far from telling the truth, however her exact role was an attache to the Hungarian team, which meant to assist the team 24/7.

Anna has a long history as a volunteer and her role began with Judo. The first ever role she took on was at the 2012 Judo European Championships in Chelyabinsk; following that up with the U19 Waterpolo EC in the same year. In 2013 she was volunteering at the Senior Waterpolo WC, at the Taekwondo Russia Open, at the Olympic Torch process as the team leader of the animator team and at the Hockey Continental leauge. 2014 brought her the opportunity to be involved in the Sochi Winter Olympics, following that up with the 2014 Waterpolo EC in Budapest and now she was back to her very first memory. Back to the Traktor Arena for the 2014 Judo World Championships.

Anna’s involvment in different sporting events changed her plan for her future. She is currently a student at the Chelyabinsk State University, where she began studying Regionalist – Japanese region and diplomacy and International Relations with the plan of becaming a Japanese interpreter. However, she admitted, after all her involvment in different sporting events she is now more focused to be involved with sport management.

What inspired you to be involved in the 2014 WC?
The world of judo is so different and I could see how much it meant to them in 2012 at the EC, it was really inspiring. Judo is just so different to any other sports, it is truly more than just a sport. I think it is really connected with its’ origin. It is not only a sport but a philosophy too. You not only fight with your opponent but you fight with yourself. All these country all together it looks like a family and I think the volunteers were just topping it up. Moreover, for us it is a great opportunity to communicate and create contacts with people abroad. It is good practice to improve our knowledge of foregn languages, whether it be English, French or others.

For outsiders, Judo is known to be huge in Russia. What is the reality?
Well, if you look at the advertisment logo of the Championships there is a figure. That figure is our president, Vladimir Putin. This logo has been copied from a book written by Vasily Shestakov, Alexander Levitzky and the president himself. I think that tells it all. You can imaigine how big it is. Having said that, it is not our number one national sport but I can assure that everyone knows the existance of it even if they have never been involved themselves.

What do you think of the overall coverage and organisation?
We know that the majority of the people have the same opinon of Russia in general and it is not entirely positive. We remain a very welcoming people, and we want to show that to the world. We had advertisements in every corner of the city of Chelyabinsk. The posters did not only display our great judokas but players from aborad too. By having such a number of volunteers at this event we hope we showed that we care and we are here to support. Moreover, it is our nature that if something doesn’t work we push it until it works. So, hosting such an event as the World Championships also helps us to realise our errors in the city too and build from those errors to make it better.

Which is your favourite country and why?
I will say it is Hungary, but that is due to the fact that I was working with them at the 2012 Judo EC which was my first impression of the sport of Judo. As I discribed earlier, the tention, determination and the motivation was incredible from the team. I believe it must have been the same for all, but I was with the Hugarian team and so they inspiried me. Besides Hungary I would say Japan and Sweden are my favourites too.

The first ever Judo Park was built in front of the Traktor Arena. Could you tell us a bit about it?
It is a brand new idea as far as I am aware. Inside, you find different sections such as social area, judo store, food court and there is a great space of section build to display some parts of the Russian tradition. There is even a post office built outside to send postcards to your country for a very small cost. The atmosphere and the vibe is great out there.

The 2015 World Championships will take place in Astana, Kazahstan. “We are working closely with the oranisers in Astana and helping them with everything including advertising. Some of us may be attending the event there too. I am not sure where I will be but I am sure it will be another amazing Judo event.” – Anna explained.

Our sporting heroes will return to Russia on the occasion of the 2016 European Championships which will take place in Kazan and will be the last qualification tournamnet for the 2016 Olympic Games.