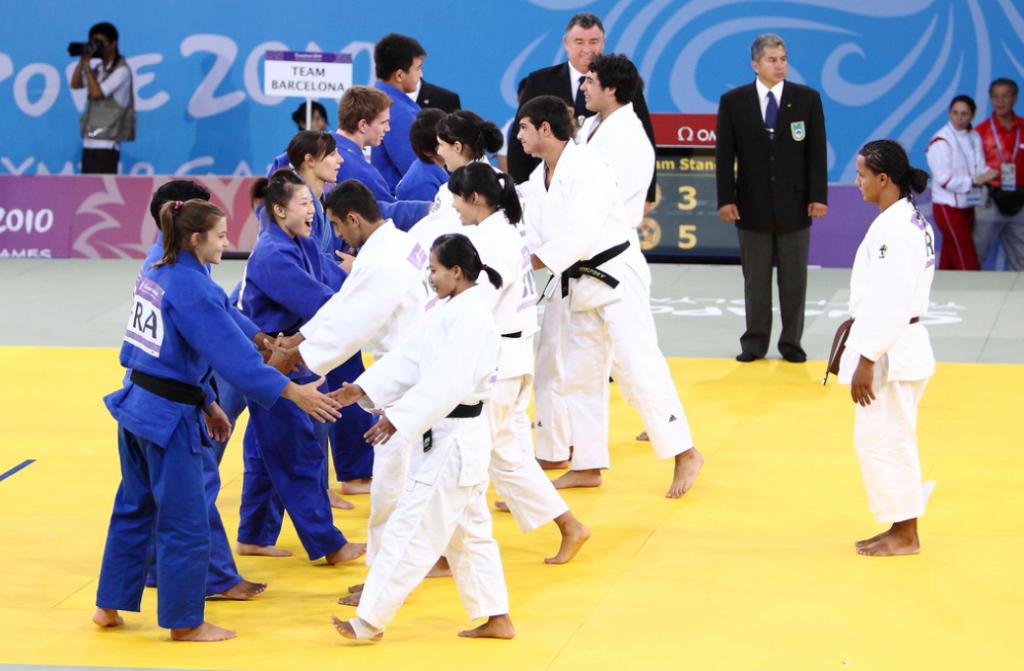 German coach Anna von Harnier, a former world-class judoka herself, was coaching Natalia Kubin (GER) of team Osaka on the blue side before she moved to the white chair to coach Marius Piepke (GER) in the opposing team Belgrade in the next bout.

No two athletes from the same NOC are allowed in one team and so it happened that Germany, as well as Japan, had two athletes on the mat at the same time, but on opposite sides.

“Of course it is a little bit strange, as as a coach you start to bond with one team”, Von Harnier said. “I could not really cheer for one team, in fact in the first round I was cheering for the eventual opponent of my own athlete.
Von Harnier won bronze herself at the 2003 World Championships in Osaka.

“But this is really a very friendly event, so after all it was no problem. Both my athletes showed a good performance, so I am satisfied.”

To complete the irony, Kubin’s win over Lola Mansour (BEL), the gold medallist in the individual event, put team Osaka in the lead. In the following bout Piepke of Belgrade won over Bruno Abel Villalba (ARG) and sealed the defeat of Osaka.

The Kubin versus Mansour bout was a remake of the individual gold medal match, just with a different winner. Kubin was leading again, but this time she maintained her advantage.

“When there were only a few seconds left, I did think of what happened in the individual match (she had been leading until 17 seconds before the end) and thought if this is going to be a deja vu I will be really, really sad.”

Japan’s two gold medallists Miku Tashiro (girls U63kg) and Ryosuke Igarashi (boys U100kg) were also facing each other in opposing teams. “I enjoy the team event, it gives me the chance to give my best without too much pressure on myself,” said Tashiro of team Essen after winning the quarterfinal against team Chiba. “The team has started to bond and we get along well.”

Anna Dmitrieva (RUS), silver medallist in the individual U52kg category and into the team semifinals with Belgrade, is also pleased with the new format: “It’s made it easier for us all to make friends and it’s bringing the different countries closer together. I love it,” she said. “Nobody expected this format could actually do that.”

Dmitrieva was seen hugging the girls after their victory, also squealing throughout the bouts. “I only just met them today,” she said. “We can’t really talk or understand each other because of the language barrier, but we all understand judo. They’re my new friends”, she said.