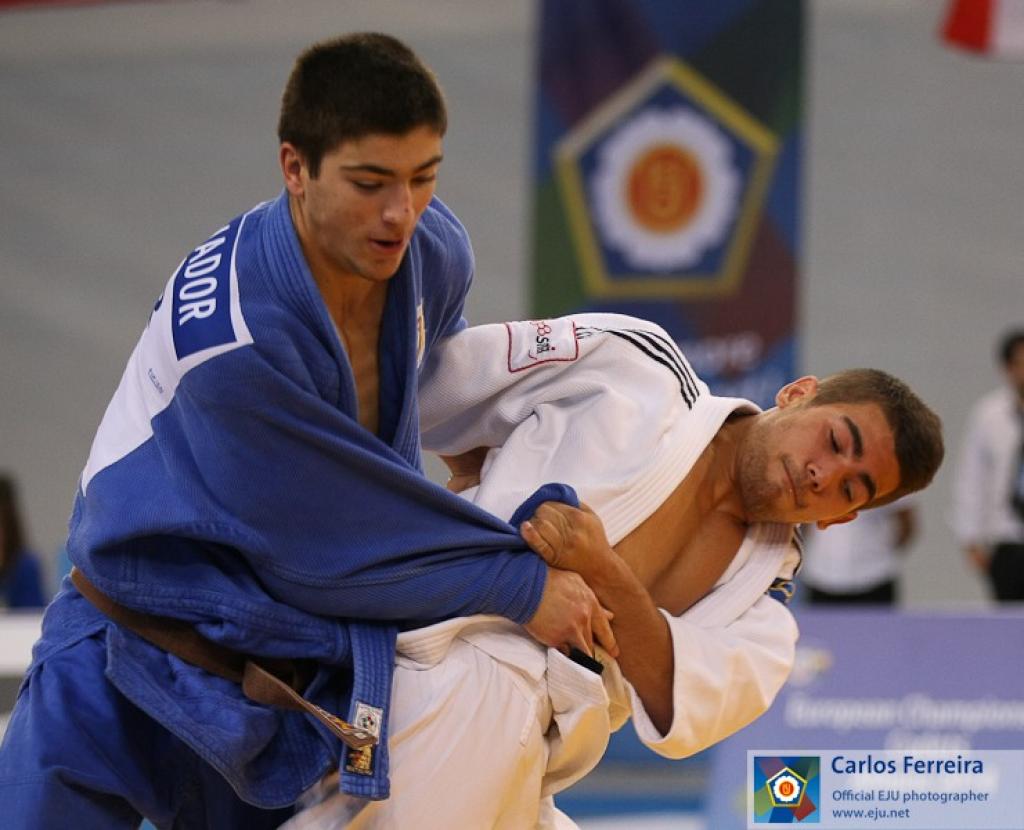 The European Cadet Championships in Athens, Greece, wrapped up Sunday in the Olympic Center of Ano Liossia with the men’s -81kg, -90kg and +90 kg as well as with the women’s -70kg and +70 kg. Most favorites and top seeds made it to the final stage of the competition on the third day, but there were a few upsets.

All Russian final in -81kg
Russia will have the gold in the -81kg, but the question is if top seeded Turpal Tepkaev or 2013 World Cadet Champion(-73kg) Zaur Ramazanov (RUS) will get it.
Tepkaev started strongly with victories by Ippon over Lorenzo Perricone (FRA) and Davit Nalbandyan (ARM) into the day. In the semifinal, Sergiy Krivchach (UKR) offered more resistance and the match went into the Golden Score. Tepkaev was able to throw the Ukrainian for waza-ari after 47 seconds.
Ramzanov advanced to the final by beating Konstantinos Papadimitriou (GRE), Lazar Cupic (MNE) and Tony Persehais (FRA) in the preliminary rounds and finally Eduard Trippel (GER) in the semis.

Trippel, the second seeded judoka in this category, will meet Matthias Casse (BEL) in the bronze medal contest. Krivchach will face Persehais in his fight for bronze.

Gvelesiani (GEO) to face Kotsoev (UKR) in -90kg
Giorgi Gvelesiani (GEO) advanced to the -90kg final as expected, but it was not a walk through the park. The top seeded Georgian overcame Aaron Fara (AUT) in the semifinal by waza-ari and before relegated Aleksejs Akimenko (LAT) and Milot Jusufi (GER) to the repechage.

Zelim Kotsoev (UKR), a bronze medalist at the 2013 European Cadet Championships, prevented an all-Georgian final when he defeated defending European Cadet bronze medalist Daviti Ramazashvili (GEO) in the semis. Kotsoev beat Martti Puumalainen (FIN) in the quarterfinal and Ioannis Panagiotopoulos (GRE) in the round of 16.

26 judoka competed in this category.

Daurbekov (RUS), Spijkers (NED) go for gold in +90 kg
In the heavyweight, top seed Vakhid Daurbekov (RUS) met the expectations and proceeded to the final. The Russian pinned down Ahmet Yildirim (TUR) to the mat in the semifinal to achieve Ippon. But he beat Leonid Gasyuk (UKR) in the quarterfinal only by shido. In his first match, he defeated Dominik Majowski (POL) by waza-ari.

Daurbekov’s final opponent will be Jur Spijkers (NED). The Dutch defeated second seeded Alessandro Graziano (ITA) in the quarterfinal and threw Stephan Heygi (AUT) for Ippon in the semifinal.

Graziano has a chance for bronze against Yildirim. Heygi will fight Romas Petkus (LTU) for bronze.
Another contender, Kemal Kaitov (RUS), ranked fourth in the world in this category, was out after losing his first contest.

Two-time European Cadet medalist Ekaterina Tokareva (RUS) is in the final one more time and hopes to get the gold after taking silver and bronze in the two previous years. The Russian sent 2013 European Cadet silver medalist Aleksandra Samardzic (BIH) to the bronze medal match in the semifinal. On her way to the semis, she also beat Lyudmyla Drozdova (UKR) in the quarterfinal and Petra Opresnik (SLO) in the round of 16.

Samardzic will fight for the bronze against Chantal Walhout (NED) while Maekelburg has to deal with Juliette Tarting (FRA) in her final match of the day.

Second seeded Semanur Erdogan (TUR) had lost to Samardzic in her first contest.

There were 22 entries in this category.

Second-seeded Marina Bukreeva (RUS) advanced to the final from the other side of the draw. She beat first Daniela Rainer and then Marketa Paulusova (CZE) before meeting Barbara Cikic (NED). In what was a close contest, Bukreeva eventually benefitted from Cikic’s disqualification as the Dutch accumulated too many penalties.

2012 European Cadet Champion and 2013 European Cadet silver medalist Kamila Pasternak (POL) lost her first match to Cikic, but has still a chance to complete her medal collection with a bronze. She made it through repechage and will meet Hershko. Cikic will fight for bronze against Mercedesz Szigetvari (HUN).

16 girls competed in the heavyweight.