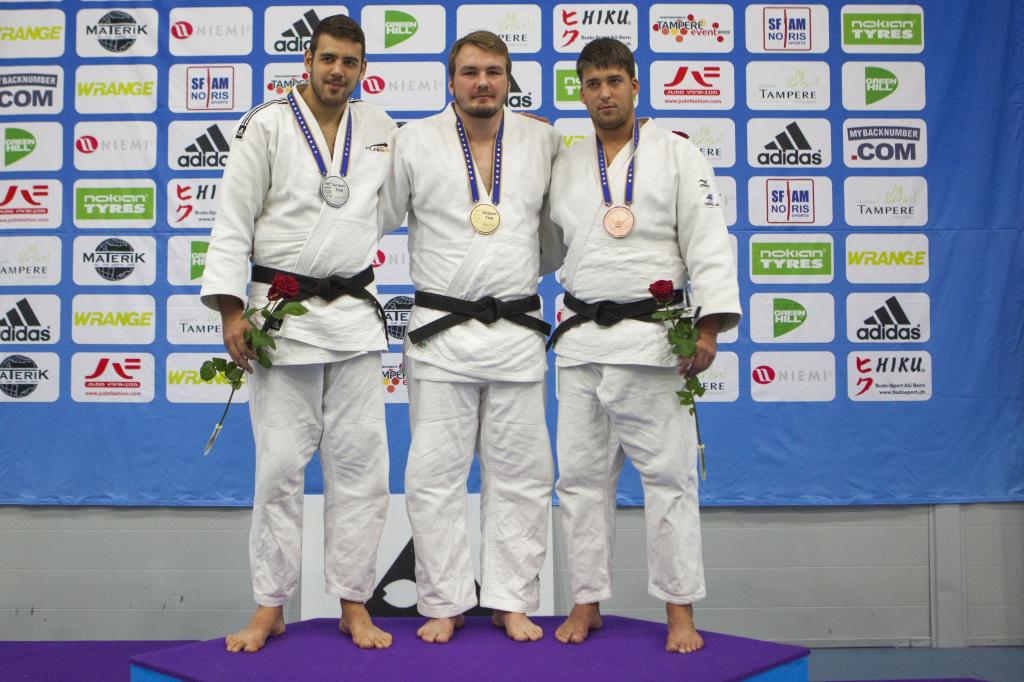 Mettis won by all of his contests by ippon on his way to winning gold and retaining the title he won last year.

Mens -81kg finals saw the most even matches of the day. One bronze match was between Olle Mattsson (SWE) and Benjamin Kjeldsen (DEN). Mattsson took the lead with a wazari and Kjeldsen fought hard to the end. It wasn’t enough and Mattsson took the medal. The other bronze match was between Ivan Pakhomov (RUS) and Zachary Burt (CAN). Neither scored points and in the end Burt won due to a penalty collected by Pakhomov. The final was between Antoine Jeannine and Quentin Joubert, both from France. This contest too was decided on a single shido and Joubert was the guilty party leaving the gold to team mate Jeannine. Both were first time medallists in the European Cup.

France was represented with a top level team at the European Cup in Tampere this weekend. Lucile Duport (FRA) in the women’s –52kg category made it to the finals where she took the gold medal with moves befitting her number one ranking.

Anna Righetti, ITA, and Cindy Huber, FRA gave the audience one of the toughest matches of the day in the women’s -57kg category. In the end Huber scored ippon with a legthrow, and France got one more gold medal.

In the mens –73kg Eetu Laamanen FIN, upgraded his silver from last year to gold. In the final against Kunther Rothberg, EST, the Estonian was in the lead with yuko but in the end Laamanen won when Rothberg collected four warnings and hansokumake.

A big suprice in the women’s –48kg series was Taina Kaiponen (FIN) winning against Harkirat Sekhon (GBR), who has an EJU-ranking of 48. Kaiponen also fought hard against Canada’s Leonida Sheffield but in the end her road to the finals ended there.
The second day at the European Judo Cup saw more Finnish success, when Jaakko Alli fought in the mens -90kg final. Alli won both qualifying matches with spectacular uranage. First on the tatami was Maxime Aminot (FRA) and then Taavi Bekker (EST). In the final Alli was up against Estonias Aleksander Marmeljuk, and once again his uranage throw was successful.

Watch all the photos from ECup Tampere in our photo gallery: http://www.eju.net/media/?mode=showEvent&id=1845