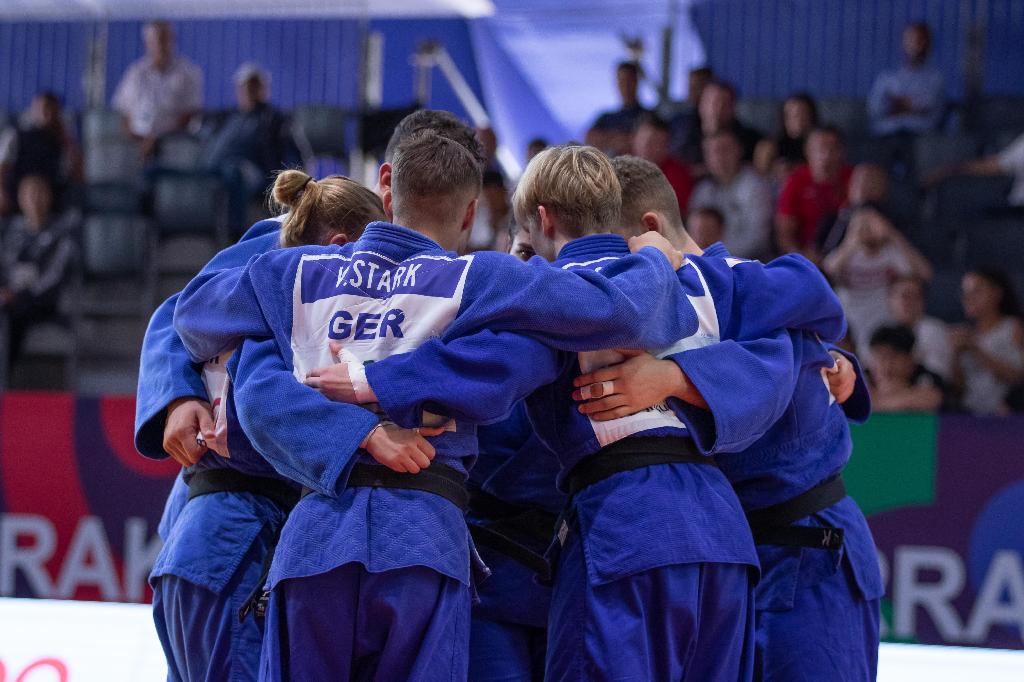 Following a successful morning of preliminary contests, the European teams that had their chance at a medal included; Germany; Georgia; France and a final for Russia.

With the Moroccan team up first against Georgia in the mixed teams event, you could hear the chanting from the venue before you could see it. Unfortunately for the home nation, Georgia were just too strong and won the round 4:1, Luka KAPANADZE could have sealed the fourth and final win to put them in to the second round against Brazil, however there was tape left inside his judogi that fell on to the mat, automatically giving the win to Morocco. So next up was Mariam TCHANTURIA to finish the job, who scored waza ari in the first thirty seconds and another within the first minute.

On Mat two, Germany were battling tirelessly against Uzbekistan, the first two contests leaving it 1:1. Caroline FRITZE tried to pull it back in the Germans favour in the -57kg category but picked up three shidos in the process. Next up was Kilian OCHIS in the -73kg and though he was down a waza ari, brought it back with 17 seconds left on the clock, scoring ippon.

At 2:2 it was now up to Mina Agneta RICKEN to keep the ball rolling, and that she did, turning her opponent in to osae komi. Johann LENZ found himself at a major height disadvantage to his Uzebek opponent, Muzaffarbek TUROBOYEV who quickly used his limbs to score waza ari, but wasn’t careful enough in the follow up, allowing LENZ to tie him up in ne waza, his team celebrating their first round win.

Russia followed on tatami two against China, the first of the quarter finals, the flags flying and the team chanting ‘Russ-i-a’, hyping up their first athlete, Valeriy ENDOVITSKIY against China’s Haonan HU. ENDOVITSKIY dominated the contest with an early waza ari and an eventual o uchi gari scored him an ippon and Russia’s first win. The second contest was evenly matched between Vita MAIDANIK and Nan WANG, going in to golden score, but a minute in gave China the win the needed. Two blinding uchi mata attempts from Ibragimgadzhi SULEIMANOV against Jinhang LI in under 60 seconds put Russia back in the lead. There was no coming back for China at that point, Dali LILUASHVILI executed a morote seoi nage against Yingying FENG and a co soto gari ippon from Mansur LORSANOV secured the semi final for Team Russia.

All three mats were then engaged with the three remaining quarter finals. Japan facing Korea, France against Germany and Georgia battling Brazil. With so many judoka on the mat, the arena came back to life, the +90kg men up first.

Germany and France took centre stage and it was a to and fro battle between the great teams, Erik ABRAMOV taking the first win for Germany and Marlene GALANDI working swiftly in ne waza to apply shime waza for win number two. Ophelie VELLOZZI eventually took her win for Team France, scoring an initial waza ari before her ippon secured the contest, similarly Israil DAKAYEV worked gradually for his ippon with a sleeve grip seoi nage. The fifth contest between Eniel CAROLY and LENZ was very tense, both teams roaring for scores to be given, CAROLY first to put one on the board, then delivering a devastating foot sweep which meant the next contest would be the decider.

Lea FONTAINE came up against Christina FABER, and the contest was most definitely in favour of the French given the great weight difference. Though FABER tried her hardest to move her opponent, her attack was halted and she was taken to the ground with no chance of escape and so the quarter final win went to the French and a place in the semi final against Japan.

Georgia managed a 4:1 win against the Brazilian side, Gela ZAALISHVILI back in his stride and setting the precedence for his team, managing to get his opponent, Lucas LIMA airborne with the ‘Georgian lift’, scoring ippon. It was a fight almost to the end for Eteri LIPARTLIANI but an o goshi sealed the deal and the 2:0 lead. Brazil attempted to catch up as Jeferson SANTOS JUNIOR applied shime waza in the third contest against Giorgi TUTASHVILI, but their hope was soon crushed as TCHANTURIA switched right to left scoring ippon, her opponent not even having chance to react.

Wary of the Brazilian ne waza, Lasha BEKAURI tried desperately to escape it and was almost caught with an arm lock by SCHMIDT, but triumphed in the end to put his team in the semi final against Russia.

Germany found themselves in the repechage contest against Korea, determined to come back for the bronze medal.

The -57kg women kicked off the repechage rounds, FRITZE back in action and despite previous losses, was in no way disheartened. The contest was very physical and a constant fight for the grips, her opponent HUH Mimi managed a waza ari score, but in the end it was a warrior effort from FRITZE as she left the mat bloodied. Vladimir STARK and GALANDI completely controlled their contests, throwing in to ne waza, STARK executing juji gatame, GALANDI shime waza. Louis MAI was still on top form following his bronze medal this week and scored an incredible ippon with tomoe nage to make it 3:1 to Germany.

Unfortunately Samira BOUIZGARNE couldn’t win the decider and so in stepped ABRAMOV against senior World bronze medallist, KIM Minjong. It was a shaky start, both working hard to avoid being thrown but a weak attack from KIM was countered by ABRAMOV and later an attack esulted in a bronze medal fight for Germany, the crowd excitedly chanting ‘ERIK ERIK ERIK’.

The first semi final was Russia against Georgia. LIPARTELIANI was first up in the -57kg category against MAIDANAK, a foot-sweep and co soto secured the first win for the Georgian team. KAPANADZE was not so fortunate and fell in the first exchange resulting in osae komi for Makhmadbek MAKHMADBEKOV. TCHANTURIA went hard from the offset, the physicality on the Georgian’s side scoring with an uchi mata and o goshi.

The following contest was between Lasha BEKAURI and LORSANOV. This was a brutal contest for both athletes, the pair after the same grip and there was no letting up. Eventually 32 seconds in to golden score, LORSANOV threw for waza ari and evened the score 2:2. Similarly to KAPANADZE, Salome MAKISHVILI found herself in osae komi and unable to escape against Daria VLADIMIROVA. This left it up to ZAALISHVILI to keep the team in with a chance, but with it came much support from the crowd, all was on the line for a place in the final, and a morote seoi nage from ZAALISHVILI took it to a decider.

This was the first decider of the day, going straight in to golden score, the weight category selected was the -90kg. BEKAURI cheered and revelled with the chance of a rematch and hope to make it right. The contest made it to 1.30, both athletes tired and a shido on the side of LORSANOV, but he had one more uchi mata to give, securing the win and a place in the final for Russia.

For France, it was a different story against Japan. It started off well for VELLOZZI as she took a strong win against her -57kg opponent, KAWADA Ayumi. DAKAYEV was unable to keep with the pace of TSUKAMOTO Ryo and suffered a defeat making the score 1:1. Morgane FEREOL was still running off the winning energy of VELLOZZI and managed to secure another brilliant win for France, unfortunately it would be their last.

CAROLY tried to put in a solid fight against MASHIYAMA Kosuke but an early morote seoi nage scored a waza ari for the Japanese, and three shidos followed for the French to decide the fourth contest. TAKAHASHI Ruri wasted no time taking FONTAINE to the ground and in to osae komi making the score 3:2. It was up to Tieman DIABY to bring it back but he was unlucky and MATSUMURA Sosuke was under pressure to make sure Japan reach the final, which he ensured with a strong ippon. This placed Japan in to the final against Russia and France in to the bronze medal fight against Brazil.

Brazil had a very successful morning, beating China in the repechage 4:1 to face France.