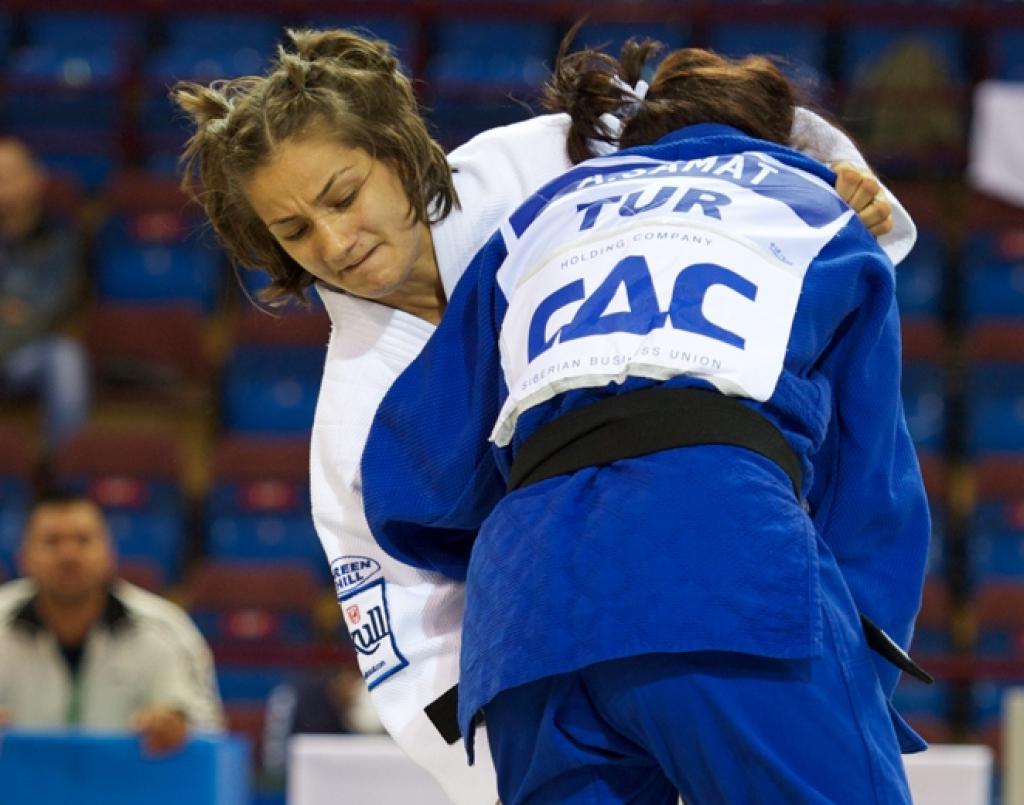 Majlinda Kelmendi has won the Grand Prix of Abu Dhabi (UAE). The athlete from Kosova who fights under the flag of the IJF has the disadvantage that her country is not recognized by the IOC. It makes it hard to qualify for the Olympic Games while her performances would allow to fight among the best of the world.
In Europe she fights under the flag of Albania.

Kelmendi collected another 200 points for the ranking in Abu Dhabi.
On Sunday Kelmendi was able to defeat four opponents: three from Asia and one from Europe. In the final she was victorious over former Asian Champion Hongmei He (CHN). Kelmendi had the best of the game and led from the start by yuko. She kept dominant, not by attacking a lot but keeping He out of her back.
Kelmendi won the Grand Prix of Tunis in 2010 and the World Cups in Rome and Minsk this month, so an amazing month for her. In 2009 she was the World Junior Champion but has good papers to make good results in the senior division while she is only 20 years young.

In the women’s U48kg Japan was on the first step of the podium, as usual. Emi Yamagishi was the winner of the lightweight category after she defeated Wu Shugen of China, a second silver for China. Yamagishi also defeated 35-year old Frederique Jossinet in the semi final.

The strong U57kg category was for Italian Olympic Champion Giulia Quintavalle. She defeated Dutch surprise Juul Franssen who surprised Telma Monteiro in the semi final by ippon. Franssen who suffered an injury recently was happy to fight her first event again, and made it to the final by defeating four opponents starting by Nae Udaka (JPN). Quintavalle won a strong pool with Automne Pavia as most dangerous opponent in the semi final.
Halfway the final Quintavalle threw Franssen for ippon but the two judges got it wrong and awarded a wazari. Quintavalle was convinced it was ippon and was out of concentration. Franssen was sharp as a razor and jumped on the Italian to make the ne-waza and scored a waza-ari as well.
In the last minute both judoka couldn’t score the differentiator. Quintavalle however finished the match with a ippon in golden score and took the gold. Both Quintavalle and her coach were annoyed she had to score two ippons, but took the gold at last. A silver medal would have been sensitive as Quintavalle lost the final last year as well against Sabrina Filzmoser (AUT).

Quintavalle has not won a lot, despite her Olympic title. But this year she won three tournaments in Lisbon, Rome (recently) and on Sunday Abu Dhabi. In other years she hasn’t won any tournament.

Japanese Fukuoka Masaaki won the U66kg category by three white flags of the referees after his draw against Cho Jun-Ho of Korea.
Two Asian finals though in the men’s lightest divisions.
Nine medals for Europe at the first day against 17 last year in the same categories.

Follow the event on Monday and Tuesday again in your number judo channel.