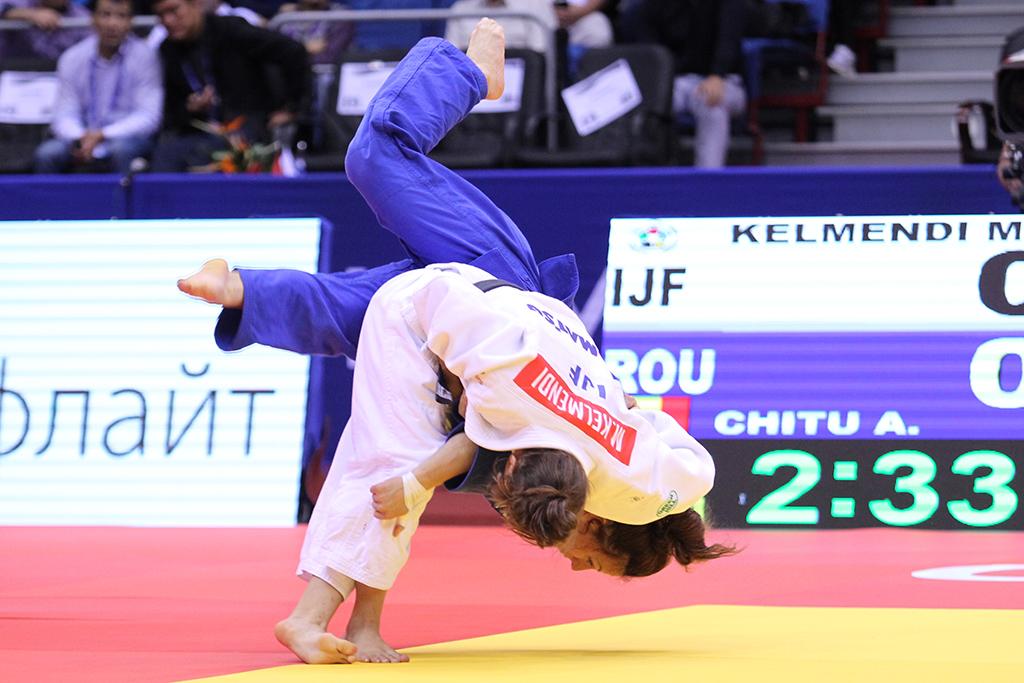 After a bye in the first round Kelmendi began the defence of her title by throwing Vanessa Cortesia VEN for ippon with o goshi within 40 seconds. This brought up a difficult third round contest against world bronze medallist (Tokyo 2010) Munkhbaatar Bundmaa MGL. Although the Mongolian managed to take Kelmendi the distance, she collected three shidos leaving Kelmendi to take a place in the quarter-final against 2005 world champion, at -48kg, Cuba’s Yanet Bermoy. The superior throwing skills of Kelmendi were on full display as the Cuban was thrown first with uchimata for waza ari and then again for waza ari with a tani otoshi coutner within a little over a minute. In the semi final against world bronze medallist (Tokyo 2010 ) Natalia Kuziutina RUS, Kelmendi found herself trailing at the two minute mark by a shido. However, an uchi makikomi attack by the Russian was countered for yuko by Kelmendi who went on to win by the single score. In the final Kelmendi faced Andrea Chitu ROM the latter having lost to Kelmendi in all three of their previous meetings. Chitu was thrown twice, first with o goshi for waza ari and then for yuko with uchi mata, Kelmendi then running out the clock to take gold and her second world championship title. There was a bronze medal also for Russia’s Natalia Kuziutina. In the 66kg Mikhail Pulyaev RUS took a silver medal, defeated in the final by double world champion Ebinuma Masashi JPN whilst the bronze medals went to Georgi Zantaraia UKR and Kamal Khan-Magomedov RUS.

For the rest of the Day Two results see: http://www.ippon.org/wc_sen2014.php
To see the gallery click here: http://www.eju.net/media/?galleryId=71&mode=showEvent&id=1833