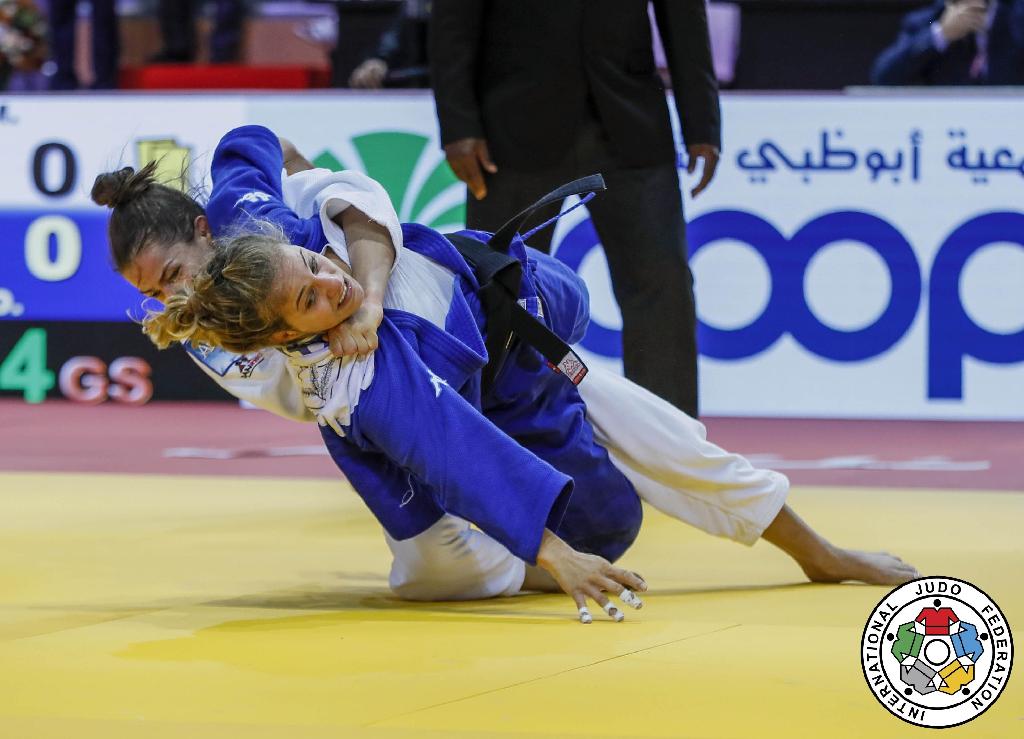 The much-anticipated clash between current Olympic champion in the -52kg category Majlinda KELMENDI (KOS) and runner-up Odette GIUFFRIDA (ITA) was one of the highlights of the final block on day one of the Abu Dhabi Grand Slam. Kelmendi can reasonably have been expected to have had fresh in her memory her loss to Giuffrida at last year’s event. It was a loss that Kelmendi was loathe to accept after a blood injury (nasal) forced her to withdraw. This year however, it was Kelmendi who proved victorious and in some style.


Kelmendi began the day as number one seed and, after a first-round bye, began her pursuit of the gold medal in earnest with a win by ippon over Salimata FOFANA (CIV), Kelmendi throwing Fofana with a trade mark o goshi within the first minute. Kelmendi then racked up two more wins by ippon first against Anna KAZYULINA (KAZ), then PARK Da Sol (KOR). In the semi-final Kelmendi was made to work that little bit harder when Chelsie GILES (GBR) took the Olympic champion the distance, giving up a single score of waza ari to see Kelmendi take a place in the final.


And so, it was that Giuffrida too, as number three seed, carved a path through the lower half of the draw to find her way to the final, and a ninth career meeting with Kelmendi. The head-to-head stood at 6-2 in favour of Kelmendi. In the lead up to the contest Giuffrida had looked well prepared, competent and highly capable of applying specific plans for her various opponents. That was the case too in the final where for four minutes Giuffrida maintained a more productive work rate, looked the most likely to score and avoided picking up a penalty. Kelmendi, on the other hand, failed to match Giuffrida’s tempo, did not seriously threaten the Italian fell behind by two shidos. But in the golden score period, the balance of the contest began to shift.


A degree of desperation began to seep into Giuffrida’s approach. It was not simply her possible desire to see Kelmendi collect a third shido, but her awareness that her own attacks (that resulted in her collecting two shidos) were being seen as tactical. There was no longer the “cushion” of being shido free. Indeed, a false attack would gift Kelmendi the contest. And when, after 4:30 of golden score Giuffrida attacked Kelmendi with o guruma, it was with commitment and determination. But the attack required close contact with Kelmendi and in a flash the Kosovan launched a nidan ko soto gari couther that saw Giuffrida catapulted to the tatami for a devastating ippon and it was Kelmendi who came away with the prize.