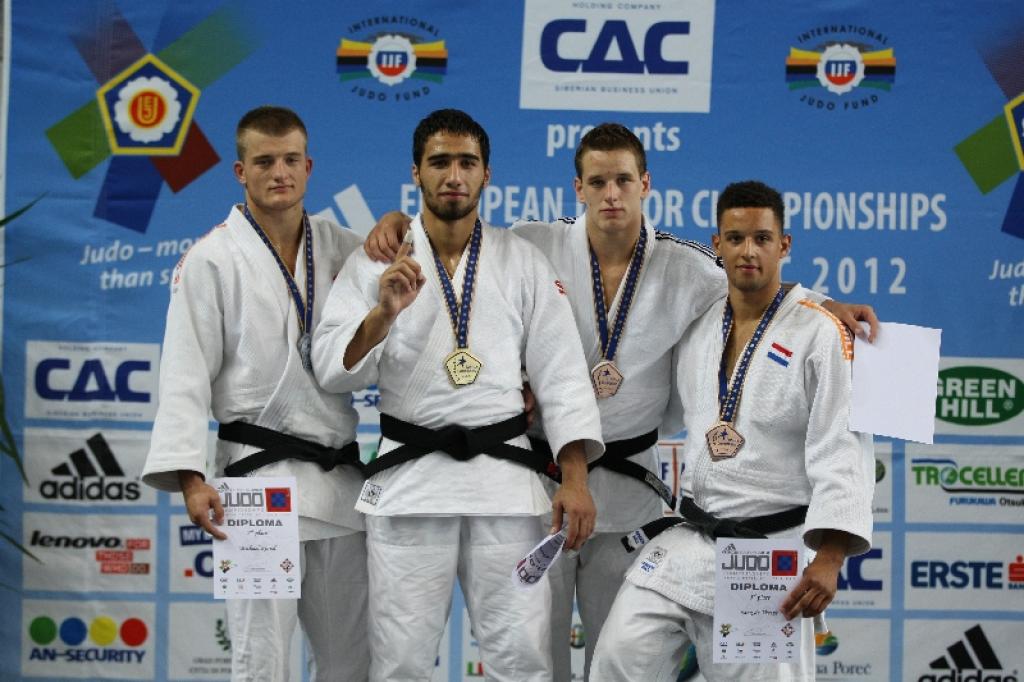 The final of the European Championships for Juniors in the category U90kg was between Russia and The Netherlands. Dutch Michael Korrel was able to reach the final. His opponent Khusen Khalmurzaev was more expected. Khalmurzaev won the European title last year in Lommel and collected a silver medal at the World Championships in South Africa last year.

In the first two minutes it was most over a fight for the kumikata. Although Khalmurzaev made a good impression he couldn’t convince with a score.

Korrel, coached by 1992 Olympic medallist Theo Meijer, received a first warning after 2.5 minutes. But the two strong fighters couldn’t make a difference yet on the scoreboard. The U90kg class is a bit weak nowadays in the Netherlands where there hasn’t been a structural solution to succeed Mark Huizinga after he retired in 2008. Maybe the new generation with Michael Korrel and Max de Vreeze may have a chance to get a place among the best seniors.

Khusen Khalmurzaev, twin brother of Khasan fighting U81kg, needed the golden score to take retain the European title this year. After 14 seconds in the extra time he finally scored a yuko. Just like Margaux Pinot (FRA) he prolonged his title.

Max de Vreeze (NED) won a bronze medal for The Netherlands. He lost the quarter final to Zgank (SLO) but came back in the repechage with two victories and booked four victories in total. His first match against one of the bog favourites Krisztian Toth (HUN) was a big upset.

Mihael Zgank came back with a bronze medal after his defeat against Khusen Khalmurzaev (RUS). In his bronze fight he defeated Gergo Fogasy (HUN) after a tough fight by a penalty 13 seconds before the end.

Gold for Russia again in this category. Since 1998 the Russians won the title six times in this category U90kg and three times in a row. In 2010 Magomed Magomedov won gold in Samokov. The first three Russian European Junior Champions weren’t successful in the seniors, a good warning to keep on working for Khusen Khalmurzaev.