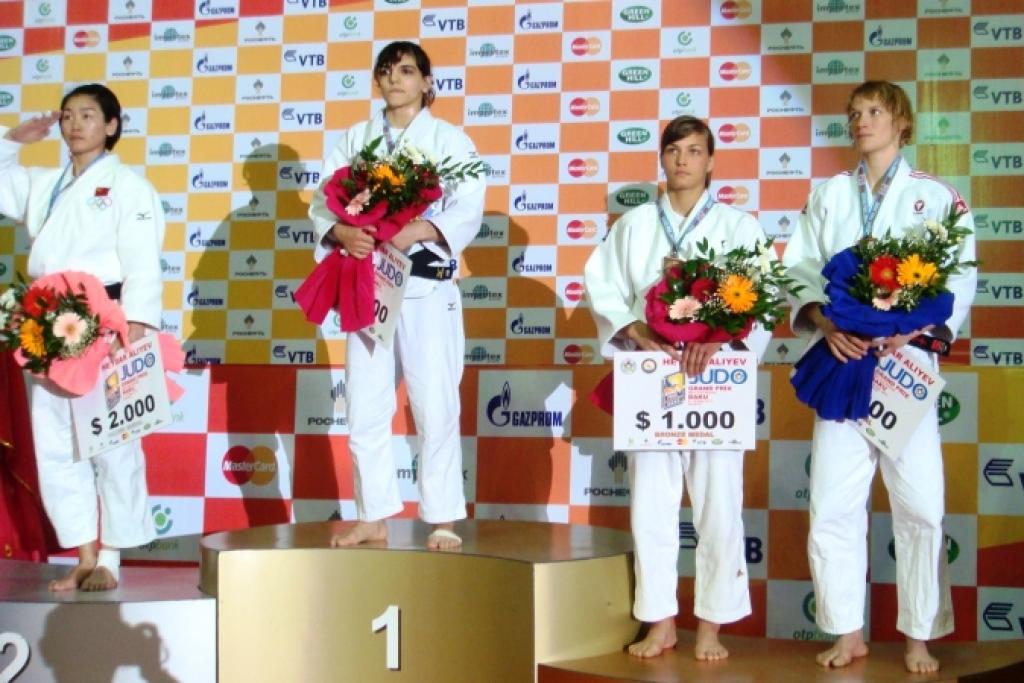 Kifayat Gasimova has won the Grand Prix of Baku in her own country in the U57kg weightclass. She got the full attention of the crowd in the nice Sarhadchi Stadium of Baku when she was fighting her final against Wang Hu from China. After 2:50 seconds Gasimova scored a great ippon.
In the semi final Gasimova had defeated Hedvig Karakas from Hungary by ippon while European Champion Sabrina Filzmoser had lost against the Chinese Wang by waza-ari.
Gasimova won her 21st medal at major events since her first in 1999, but just her fifth gold medal. Her previous victory was in 2008 winning the World Cup in Sofia. In 2006 she won the World Cup in Baku, quite another level compared to this event.

In the women’s final U48 it was Liudmila Bogdanova (RUS) to defeat Urantsetseg Munkbat (MGL). Both ladies were not able to score in regular time nor in the golden score and Bogdanova was awarded the hantei of the three referees.
Italian Champion Elena Moretti had lost to Bogdanova in the semi final and won bronze. Urantsetseg Munkhbat won her bout against Birgit Ente in the other semi final by decission. A good medal though for Dutch Ente who finished fifth in the previous European Grand Prix in Düsseldorf when she defeated Munkhbat in her first match.

European U60kg Champion Georgii Zantaraia was defeated in the semi final this time by a great ippon. Chimed-Yondon Boldbaatar was the winner of the semi final but lost his final against Amiran Papinashvili. The Georgian fighter had lost against Zantaraia at the Europeans but in Baku he was able to defeat all his opponents. Valtteri Jokinen won bronze, a great performance and the first medal for Finland at a major international event this year.
The last man to win a World Cup medal was Jokinen himself in 2009, but he is the first Finnish man to win an IJF event ever. Johanna Ylinen and Jaana Sundberg previously won a medal at an IJF event.

Rok Draksic won his fifth World Cup and second IJF Grand prix. Last year in the same weekend in Tunis he won his first. May is good for Draksic who
defeated Spaniard Sugoi Uriarte in the final by yuko. It was the first victory at a major event for Slovenia this year. Last year the Slovenians had already won five events at this date. Draksic and Polavder seemed to pull the medals for Slovenia last two years, but new talents are coming up in Slovenia.

Priscilla Gneto won another big medal. Last year the tiny French won the IJF Grand Prix in Qingdao and this year she won bronze at the Grand Slam in Paris.
In Baku she defeated He Cancan who she had lost to last year in Tallinn at the World Cup.
19 Year-old Gneto again jumped on the highest step of the podium after a very intense final against He. Gneto led waza-ari when He controlled her with a strong immobilization. But Gneto escaped and could finally win her 2nd Grand Prix.
Laura Gomez (ESP) and Aynur Samat (TUR) won bronze, the first bronze for Turkey this year at an IJF event. Gomez added a third bronze after Tokyo and Qingdao last year.