Kim Polling unstoppable on her way to gold 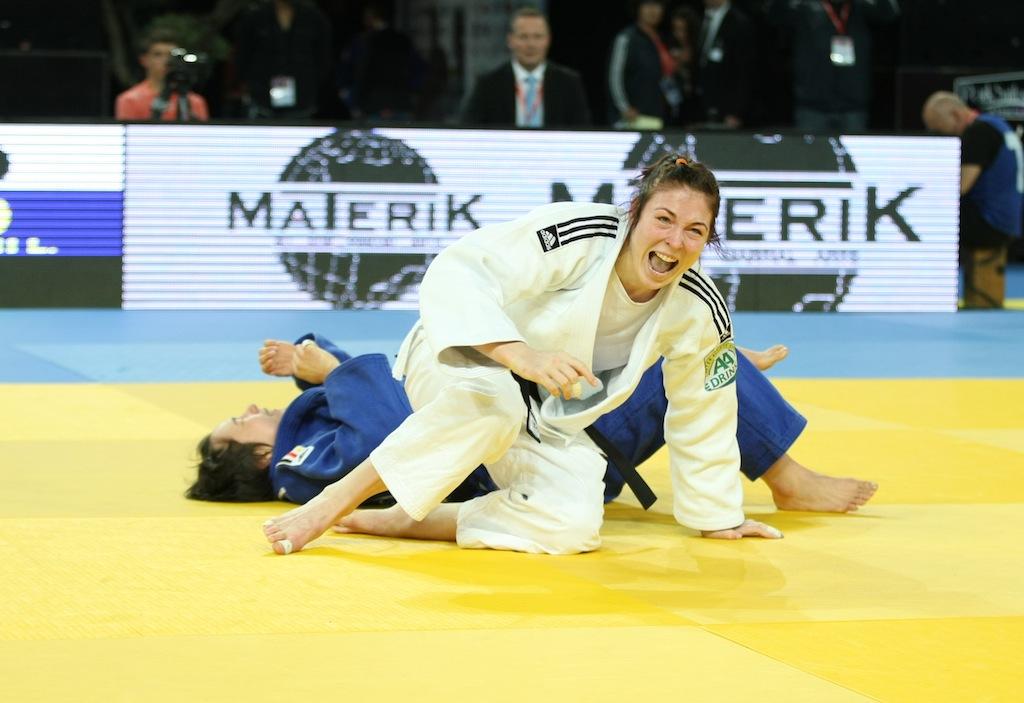 Kim Polling was unstoppable on her way to the gold in the -70kg at the European Judo Championships in Montpellier, France, on Friday. The Dutch player disposed of all her competitors by Ippon and never needed more than two minutes. In the Final, the defending champion produced one of the fastest Ippon of the day when she threw Laura Vargas Koch (GER) nine seconds into the match. Maria Bernabeu Avomo (ESP) lasted a little longer in the semi-final but eventually had no chance against Polling. “I don’t know how I did it”, the Dutch player said. “I felt good all day, I beat all opponents by Ippon. Last year I had a shoulder injury, but no I have no injury and feel great”, she added.

Vargas-Koch overcame Fanny Posvite (FRA) in the semi-final and was still pleased to come off with the silver medal. “Overall I am pleased with how this competition went for me. I attacked her (Polling), but she countered. I knew she is good at that and for next time I need to think of something else”, the World silver medalist analyzed.

Bernadette Graf (AUT) repeated as bronze medalist. “It is incredible that I was able to repeat this medal, because I had a tough time at the beginning of the tournament. Unfortunately, I lost in the quarter-final after seven seconds, but then I fought back and got the bronze”, the Austrian commented. Barbara Matic (CRO) claimed the other bronze medal. “This is only the second European medal for Croatia, so it is great. I am still a junior and this is my first senior-level European Championship. This medal will give me a lot of confidence and power moving forward”, she said.

In the -81kg, Avtandil Tchrikishvili (GEO) struggled against Aliaksandr Stsiashenka (BLR) in the semi-final and won on penalties. The final against Loic Pietri (FRA) was a repeat of the World Championship final last year, and Tchrikishvili took his revenge. The athletes looked easily matched, but with eleven seconds left, the Georgian scored waza-ari and Ippon to win his second consecutive European title. “I am very happy to have won the second time. In my first three fights I did not feel well, because after the weight control I had eaten something wrong, but then I felt better”, he revealed. “At the World Championship, I was tired in the final, I was only at 30 percent and so I could not win. This time I was not as tired”, Tchrikishvili answered when asked what made the difference today. Pietri beat Sven Maresch (GER) in the semis by Ippon, but succumbed to his arch rival in the final. “I am a little disappointed. It did not go the way I wanted”, the World Champion admitted. “He (Tchrikishvili) is my opponent number one. I will continue to work hard, and I will be able to beat him again”, the Frenchman told the press.

Maresch and Szabolcs Krizsan (HUN) claimed the bronze medals. “This is a little breakthrough for me. I had medals from the Grand Prix, but never at a championship. I can go home happy”, the German said.

In the -63kg, Clarisse Agbegnenou (FRA) was the first of three European Champions that defended her title on Friday. The World silver medalist defeated Anicka van Emden (NED) by Ippon in the semi-final. In the final against Tina Trstenjak (SLO), the Frenchwoman scored a yuko and held on to this lead until the end. “Last year, I came with no title and won, this year, I was hoping I could keep my title and I was the one that was chased. I felt it was harder to win the second time”, Agbegnenou shared.

Trstenjak prevailed over Agata Ozdoba (POL) in the semi-final and naturally was looking for more than silver. “I would have liked the gold, of course”, she said.

Ozdoba recovered to take the bronze medal in what was her debut at the European Championships. Earlier, the Polish judoka had upset World Champion Yarden Gerbi. “I am so happy to have won a medal in my first European Championship at the senior level. Against Gerbi, I scored a yuko and then I fought until the end. I got three penalties, but I won”, she said. The second bronze medal went to van Emden.

Dex Elmont had to wait a long time for his gold medal, but this time he did not let it slip away. The 30-year-old Dutch judoka made short work of Miklos Ungvari (HUN) in the semi-final and in the final caught World silver medalist Ugo Legrand (FRA) by surprise as well. “Ever since I was second in 2009, I have been chasing this European title. I grew stronger as the day went on, and especially in the semi-final and in the final I felt good. I just couldn’t believe it that I won so quickly, usually the matches with Ugo go into the golden score”, Elmont said.

Legrand beat defending champion Rok Draksic (SLO) in the semi-final by Ippon ahead of time, but the final was not his to win. “I still got a silver medal at the European Championships and I enjoyed the final phases of the competition. But I tend to lose in the big events, I have the chance to win, but I don’t use it”, the Frenchman explained.

Draksic and Ungvari earned the bronze medals. “In the semi-final, Ugo was better”, admitted Draksic. “It is the magic of judo that you can be strong but if you don’t concentrate for one second, you lose. I am happy to have won a medal, though. It is a good result for the qualification (towards the Olympic Games)”, he continued.