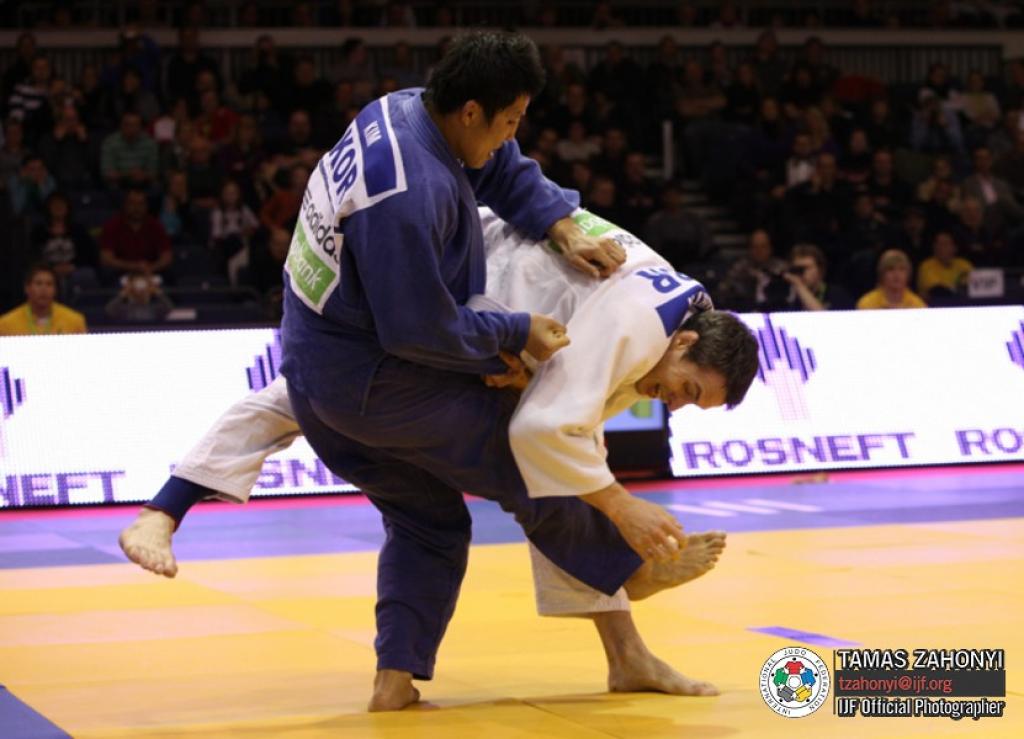 Many people expected the gold medal for Czech super talent Lukas Krpálek today in the U100kg class, but the Czech hope lost his quarter final match against Viacheslav Denysov (UKR) by a smart counter. Both judoka finally won the bronze. The title U100kg was for Yauhen Biadulin (BLR) who defeated Russian Askhab Kostoev by waza-ari. Biadulin also won the ippon trophy.
An honorary award went to Ezio Gamba (RUS).

The crown may not have expected the bronze medal of home fighter Jaromir Musil U81kg. Especially his o-soto-gari and tani-otoshi
combination against Halas of Romania was a text book style. Musil´s
performance was great today and his medal was well deserved.
Only Keller of Switzerland was able to fight equally against the winner Kim Jae-Bum.
The final U81kg was a repetition of the semi final of last week at the Grand Prix of Düsseldorf. Kim Jae-Bum (pictured) defeated Song Dae-Nam. His second international win in two weeks. But last year in the final of the Grand Slam of Paris Song beat his 5 year younger opponent. Song showed nice judo today and went to the final without any troubles. He is already 30 years and fights in this category for six years. Kim grew into this weight in 2008 and won four finals in this category.
Kim defeated Czech Musil in the semifinal by an armlock.

In the U90kg category it was Varlam Liparteliani who defeated Karolis Bauza and took the title in Prague. Liparteliani maybe Georgia’s biggest talent but he needed a victory. Liparteliani showed great judo today and performed a splendid Sasae-tsuri-komi-ashi against Kronberger
of Austria. No one scored even a yuko against him. He did not
win the final by ippon but his dominance was obvious today.

Today’s last three categories counted eight medalists of the former Soviet Union. Georgia, Belarus and Ukraine took the medals here. In the Plus category it was Stanislav Bondarenko who could quite easily defend his lead over Kim Sung-Min (KOR) in the final. The tall Ukraine fighter beat European Champion Martin Padar in the semi final.
It was his second World Cup win, the last one was in Ulaanbaatar last year, in the final against another Korean Kim Soo-Whan. The 22-year old Bondarenko seems to be the best successor of other heavyweights like Valentin Ruslyakov and Yevgeni Sotnikov. But it was a long time ago that they were successful. Ukraine is more famous is its middleweights Valentin Grekov, Roman Gontyuk, Mussa Nastuev and Gennady Bilodid. But maybe Bondarenko can be their new medal machine.

This weekend’s medal machine was ran by Korea who took five medals and two titles in total. Korea tops the tally for Ukraine that also won three bronze medals.