KORREL TRIUMPHS TO GIVE DUTCH MASTERS TREBLE IN QINGDAO 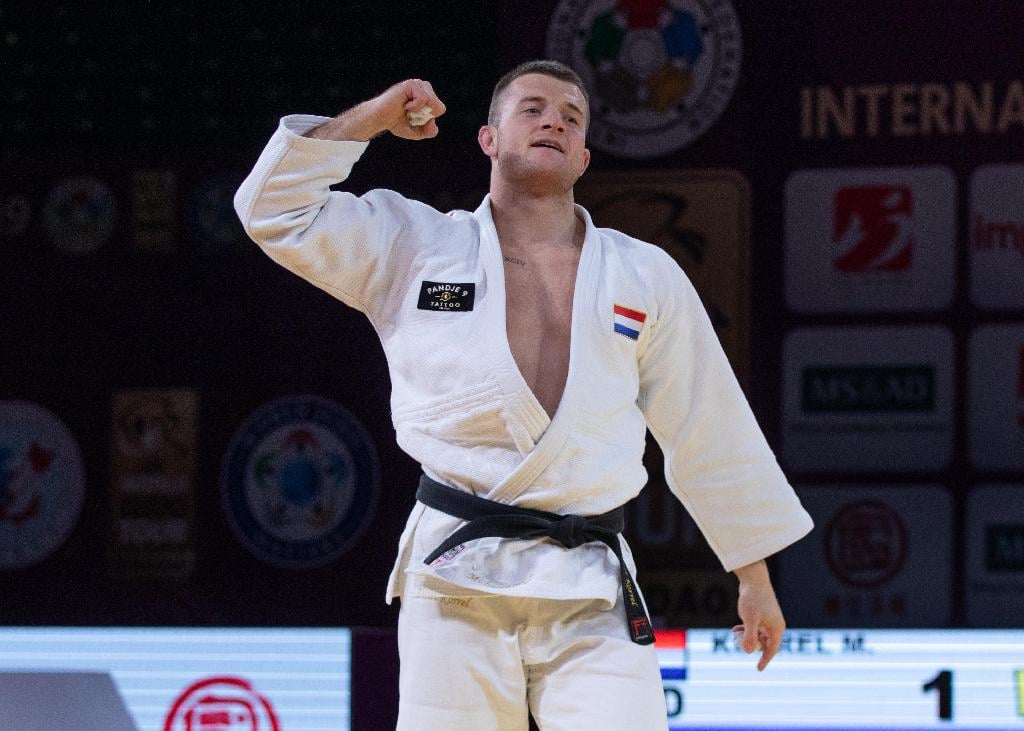 The third and final day of competition of the 2019 World Masters saw Michael KORREL (NED) take the gold medal in the -100kg category. Korrel joined Kim POLLING (-70kg) and Tessie SAVELKOULS (+78kg) on the rostrum’s top spot to see the Dutch finish second behind Japan in the medal table.

Korrel began the day knowing that as number four seed he would be spared facing any of the big names until the quarter-final at the earliest. His first-round opponent was Joakim DVARBY (SWE) who at number 32 on the IJF WRL had benefited from the increased number of competitors at the Masters this year. But Korrel limited Dvarby’s participation in the event to 2:14 as the Dutchman collected his first ippon of the day. Next up was Mukhammadkarim KHURRAMOV (UZB) who despite being ranked down at number 26 had defeated Korrel on two of their previous three meetings, most recently at the Osaka Grand Slam one month ago. Here, however, it was Korrel who came out on top by a single score of waza ari.

In the quarter-final Korrel faced 2018 world championship bronze medallist and number five seed LKHAGVASUREN Otgonbaatar (MGL). But in an uncharacteristically lacklustre performance the Mongolian collected three shidos and gifted the contest and a semi-final spot to Korrel. Next up was world number one Varlam LIPARTELIANI (GEO) who had defeated Korrel in the final of the 2017 World Masters in St. Petersburg. Korrel may consider himself to have avenged that defeat when earlier this year he defeated the Georgian in the repechage round on his way to collecting a bronze medal at the world championships. Nevertheless, Liparteliani still led the head to head series 3-1. But Korrel appeared the better prepared, the stronger, the fitter. The uchi mata unleashed after 2:30 by Korrel saw Liparteliani catapulted to the tatami for ippon and Korrel took his place in the final, the technique took its place in the highlights reel.

In the final Korrel faced 2017 world champion WOLF Aaron (JPN) against whom the Dutchman had an uncomfortable 0-3 record. In a very hard-fought and close contest it was Korrel who after 27 seconds of golden score came up with waza ari to take the gold medal and arguably the best ever result of his career to date.

When asked for his thoughts on the day Korrel said,

It was Kim Polling who, just as I was preparing for the final, told me that I would be the first male to win a masters title. I had not really thought about that I had simply discussed with my coach each round as it came up. I was not looking beyond that. Of course, on the way to the final It was amazing to catch Liparteliani the way I did. He is a real judo hero. I lost in the masters final in 2017 so it is great to finish 2019 with a gold medal. I had some ups and downs this year. After the Osaka Grand Slam I had a kind of mental reset and this seems to have worked. It is no longer just about the tournaments but about the quality of the opponents I defeat. I target certain high-quality opponents as I know that if I meet them it will be in the later rounds. So, if I can defeat them I know I will be in with a chance of a medal because you only meet them at the end. With regard to Wolf, I told my coach that I would find a way to throw him and perhaps it was not quite what I had planned but left or right I am happy either way.