KOSOVO TAKE YET ANOTHER TITLE WHILE GEORGIA PICKS UP SECOND SILVER 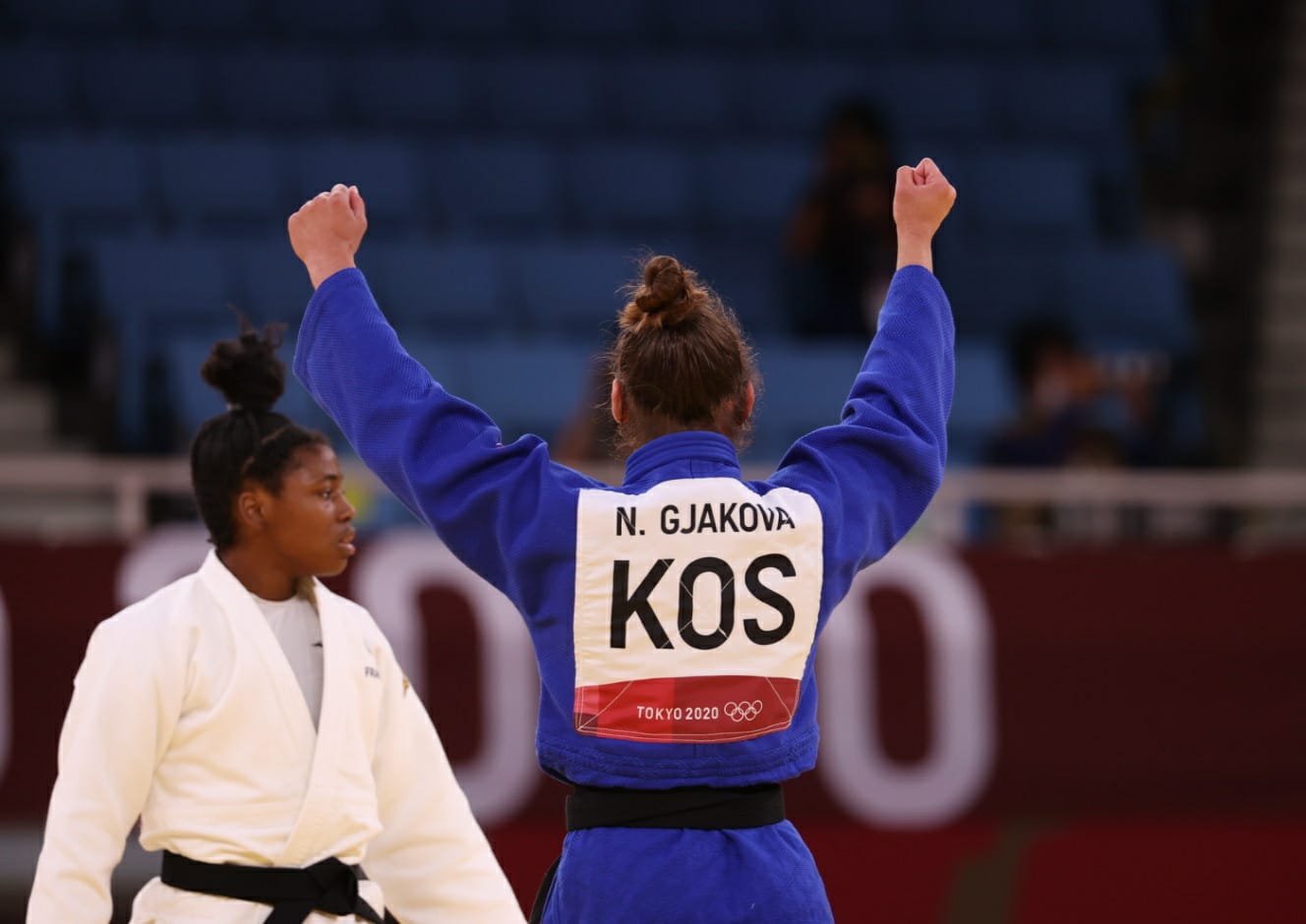 First to take a place in the bronze medal contest was Eteri LIPARTELIANI (GEO) though it was certainly a struggle for her against the 2019 world bronze medallist Julia KOWALCZYK (POL). It was a golden score affair and with two shidos against her name, the Georgian couldn’t afford to ease up and managed to get a score on the board to keep her in the game.

Another all-European repechage ensued between Timna NELSON LEVY (ISR) and Kaja KAJZER (SLO). In a similar situation, the Slovenian acquired two penalties but managed to win out in golden score.

Nora GJAKOVA (KOS) stunned the crowd to silence with a ko soto gake against the home favourite YOSHIDA Tsukasa (JPN), snatching her place in the final and securing a second medal for Kosovo, the most they’ll have ever taken in an Olympic Games event.

The current world champion, Jessica KLIMKAIT (CAN) certainly came out determined to prove that she was deserving of her Olympic place, and the performance made that clear. However, Frenchwoman Sarah Leonie CYSIQUE (FRA) matched her, unfortunately both picking up two shidos. The final penalty was given to the Canadian which put Cysique in to the final.

2016 Olympic silver medallist Rustam ORUJOV (AZE) had already missed out on a chance to reach the final but was determined to be in the bronze fight. A close repechage against Akil GJAKOVA (KOS) left the crowd questioning whether he could do it but a reactive ko soto gake gave him the waza ari he needed.

A waza ari was put on the board early by Arthur MARGELIDON (CAN) against Israel’s medal hope Tohar BUTBUL and only just managed to stay out of trouble, picking up two penalties in a bid to avoid being scored against, then with only 22 seconds left to go, a second score countering Butbul was awarded.

The only European to get in the men’s -73kg semi final was the current world champion Lasha SHAVDATUASHVILI (GEO). After a long and gruelling battle with the brilliant AN Changrim (KOR), the contest was decided on penalties. The Georgian was -66kg Olympic champion in 2012 and took a bronze in Rio in his current category. This was the second Georgian in a final in two consecutive days.

It was going to be a tough match for Liparteliani to be up against the Japanese representative Yoshida. Despite a wonderful effort and incredible Olympic debut, the 21 year-old ended up with a fifth place following two waza ari scores from uchi mata techniques.

The Canadian is known for always taking the fight to her opponent and working relentlessly till the very last second which is exactly what she did. Eventually it came to Klimkait and she threw Kajzer with her signature drop seoi nage to take her Olympic bronze medal.

The first all-European final of the Olympic Games was in the -57kg category. The pair had a 1:1 win-lose ratio before this contest so there was all to play for. Unfortunately for Cysique she was disqualified for rolling over the back of her neck when executing a technique which gave Gjakova her Olympic gold. An astounding achievement, both for the athlete and her country. The second Olympic title in Tokyo.

It was an even match in the first of the -73kg category but as the final seconds counted down, Orujov misjudged his opponent and made an error that ended in a heart-wrenching loss for the Azeri. With personal expectations high, it was a disappointing end but his performance throughout the day was an Olympic one as we can always count on.

The final between Ono and Shavdatuashvili was a memorable one, both Olympic champions but in different weight categories, they’re both the top of their game. In what can only be described as a sensational final, the golden score reached 5.35 before Ono could find the moment to attack with sasae tsurikomi ashi and score against the Georgian. There was so much pressure on both, inflicted by the other, and both recognised it at the end of the contest, acknowledging just how difficult it was. Ono kept his Olympic title and Shavdatuashvili added a silver to his collection.