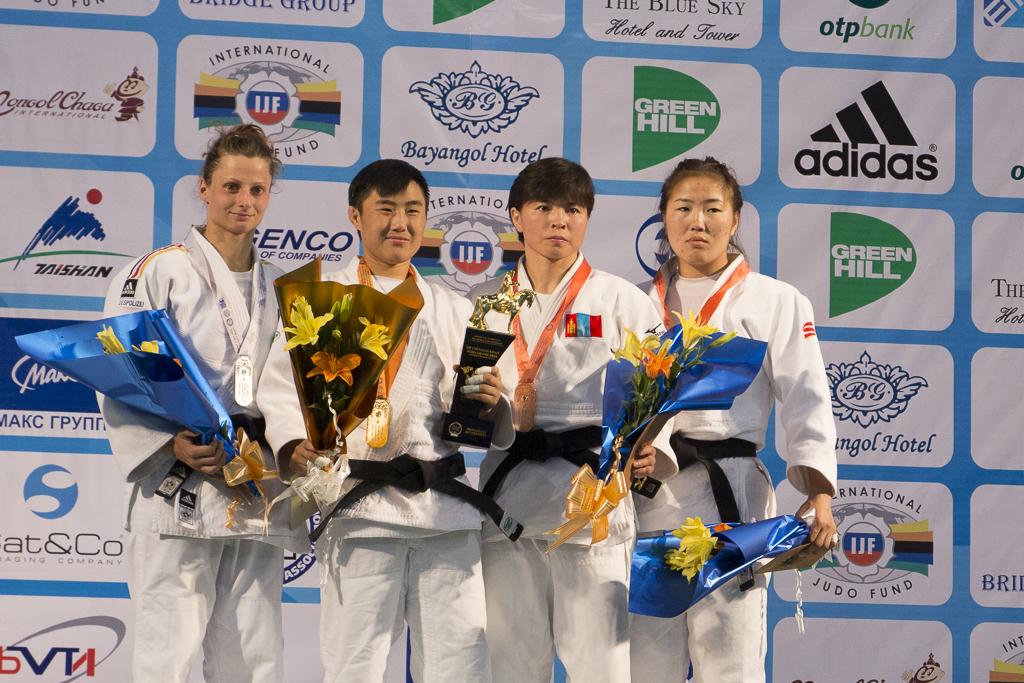 Germany’s Mareen Kraeh collected her fourth IJF Judo World Tour medal of the year when she took silver today at the IJF Chinggis Khan Grand Prix in Ulaanbaatar. Kraeh had a blistering start in the -52 kilo category throwing Mongolia’s Tseregbaatar Khulan first with tewaza for wazari then following up with ouchigari for ippon all within the first minute. Next up was Hungarian Maros Barbara who posed Kraeh more problems than in her opening contest. Nevertheless, Kraeh disposed of Maros with a fine piece of newaza. In the semi-final she faced her German teammate Romy Tarangul in tough battle that went the distance. Kraeh scored twice, first for yuko then for wazari to take the contest and make her way to the final to face Ma Yingnan CHN. “I found Ma to be a very strong opponent and had difficulty in securing a good grip”, said Kraeh. A slip by Kraeh put Ma ahead by yuko and the Chinese followed up in newaza pinning Kraeh for 12 seconds to add a second yuko. However, Kraeh was not fully able to escape and fell back uncomfortably into osaekomi where she tapped out after a few seconds. “Of course winning a silver medal is good but naturally I would have liked to have won gold as it is a medal I seem to be missing out on. Tina Zeltner of Austria put in a fine performance in taking a bronze medal in the -57 kilo category. Zeltner lost just the once to eventual gold medallist Catherine Beauchemin-Pinard CAN but had good wins against Lien Chen-Ling TPE and the difficult and experienced Kim Jan-Di KOR. Sharing the bronze medal spot in the -57 kilo category was Telma Monteiro POR who defeated Batsukh Altansetseg MGL before losing to Otomo Makiko JPN. In the repechage contest Monterio defeated a fast improving Fabienne Kocher SUI and in the bronze medal contest proved a little too crafty for Karakas Hedvig HUN whom she defeated with a yuko and wazari.

For the rest of today’s results see the following link: