KRASNIQI GOING WHERE TEAM MATE KELMENDI HAS BEEN BEFORE 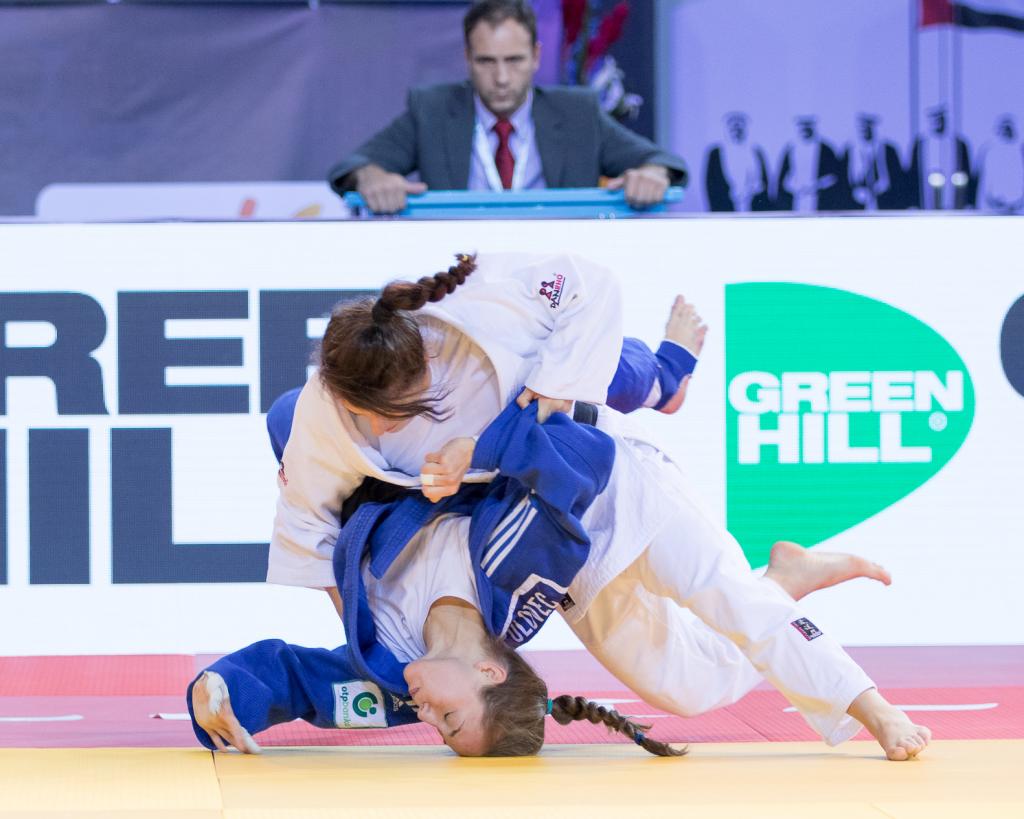 It must be extremely difficult to follow in the footsteps of someone who has not only established records but is regarded in one’s country as a national hero. However, that is exactly the path on which Distria KRASNIQI (KOS) is set and her gold medal win in the -52kg at the Junior World Championships in Abu Dhabi serves as confirmation. Her team mate, Majlinda KELMENDI won gold at the Junior World Championships in Paris in 2009 and has since gone on to win two senior world titles at -52kgs. The Kosovans will be hoping for as bright a future for Krasniqi as Kelmendi has managed to produce.

Krasniqi ha to battle through six opponents to claim the gold medal and fought first Akerke MYRZABEK (KAZ) whom she threw after 40 seconds with right sided uchi mata for ippon. Krasniqi’s second round opponent was Sadjia AMRANE (ALG), who was thrown with a low harai goshi for waza ari then held with kami shiogatame from which Amrane escaped only to be caught in a shime waza from which the Algerian was forced to submit.

In the third round Krasniqi faced TOTH Patricia (HUN) and here Krasniqi demonstrated her maturity and tactical skills, eventually throwing the Hungarian with seoi otoshi for yuko, then with a ko uchi gake ippon seoi nage combination for ippon. The quarter final with Astride GNETO (FRA) was a close one and the only time in the day when Krasniqi had to go the distance, the French fighter eventually losing out having committed three errors and Krasniqi only one. In the semi final it was Tihea TOPOLOVEC (CRO) who, in attempting to avoid giving up ippon, bridged whilst being thrown by Krasniqi with uchi mata and the Croatian was given hansokumake. This put Krasniqi in the final with Mariam JANASHVILI (GEO) whom the Kosovan threw beautifully with de ashi barai for ippon.

Krasniqi was not scored on all day and in five fights collected only one shido.

Speaking with IJF Media Manager Mark Pickering, Krasniqi said, “It means so much to me to be on top of the podium for my country and to hear our anthem. I came here with the goal of winning and I’m very happy. Everything went well in the preparation and now I will concentrate on senior competitions with the goal of repeating this world title as a senior.” Krasniqi is staying on to compete in the Grand Slam being held here in Abu Dhabi immediately after the completion of the junior world championships.