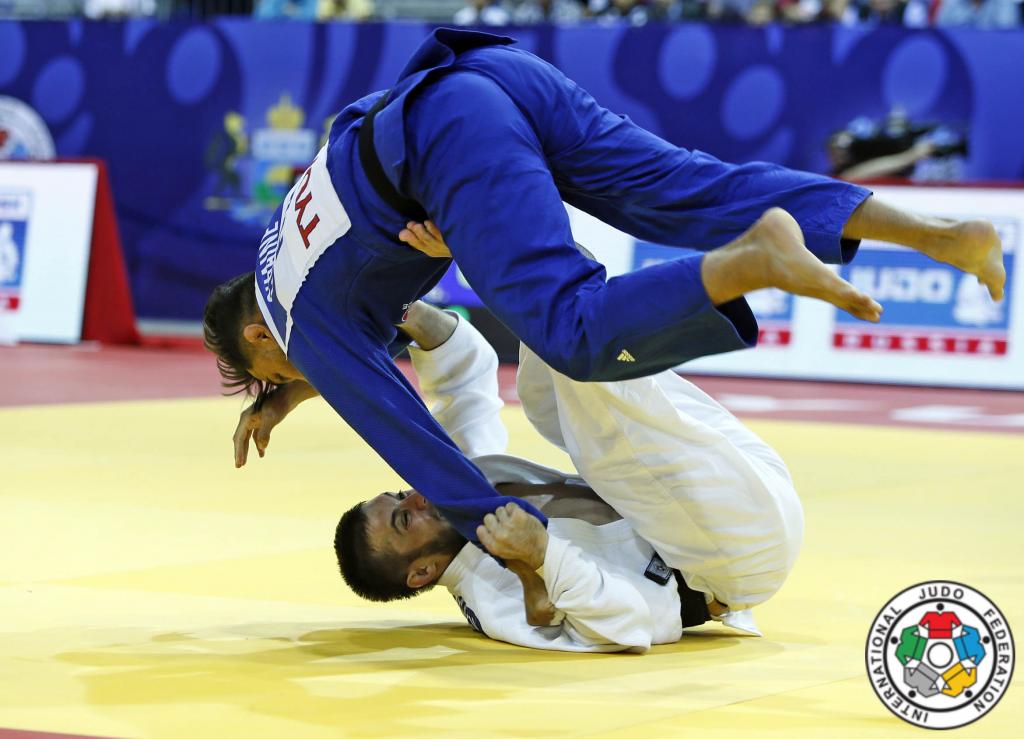 Russia’s incredible talent pool was put on show again, this time on the opening day of the Tyumen Grand Slam, when Uali KURSHEV (RUS) took the gold medal in the -73kg category. Ranked a lowly 54 on the IJF WRL meant that Kurshev was not even one of top eight seeds here. Nevertheless, the 26 year-old Russian came out on top of a quality field to give the home crowd plenty to cheer for.

Kurshev began his day against Brazilian Marcelo CONTINI to whom the Russian had lost narrowly in the quarter of this event last year. There was doubtless a degree of revenge in the air as Kurshev got his campaign underway. But whilst the result went in favour of Kurshev, the nature of the contest remained close and defensive, as it had been a year ago, with Contini on this occasion losing out by a single shido. Kurshev’s second round opponent was Christopher VOELK (GER) whom Kurshev threw after a minute with a combination of ushiro goshi and de ashi barai for ippon and a place in the quarter final. The Russian was now up against the number one seed SAINJARGAL Nyam-ochir (MGL). In a contest that was packed full of action, Kurshev scored waza ari within the first 30 seconds with a sharply executed yoko tomoe nage. Sainjargal set about pulling back the score and scored three yukos whilst Kurshev racked up three shidos. But despite his best efforts, the Mongolian was unable to draw level and Kurshev went into the semi final. Here he faced Musa MOGUSHKOV (RUS) whom, despite being a team mate, he faced for the first time, Kurshev securing a win in newaza after a little over one minute. In the final Kurshev overcame Frenchman Guilaume CHAINE (FRA) by a single yuko thereby earning the Russian his first ever IJF Grand Slam gold medal.

When asked about whether today’s win proved that he was amongst the best in Russia Kurshev answered, “The -73kg category is very strong in Russia and whilst I am very happy to win here I know that it does not prove anything other than I was best here today.” Kurshev, who comes from the city of Cherkessk in the Karachay-Cherkess Republic, is a two times world sambo champion. He and his judo coach worked out a strategy that was based on using all his attacking judo skills as Kurshev is still developing his defensive capabilities. “Of course I am interested in the Olympics and so my contest with Sainjargal was important as he is an Olympic medallist,” said Kurshev. “I did not want to fight any Russian fighters except in the final. But it worked out that I had to face Musa [Mogushkov] in the semi final. I had never fought him before but I guess I will fight him a lot on training camps now. He has been recovering from an injury,” said Kurshev. Invited to comment on his chances of competing at the world championships in Astana next month, Kurshev answered “Of course I’d be happy to be given the chance to compete in Astana. But this is the choice of Ezio Gamba and I am very confident that he will choose the best and who can do the best for Russia at the world championships and I have the greatest respect for his choice.”