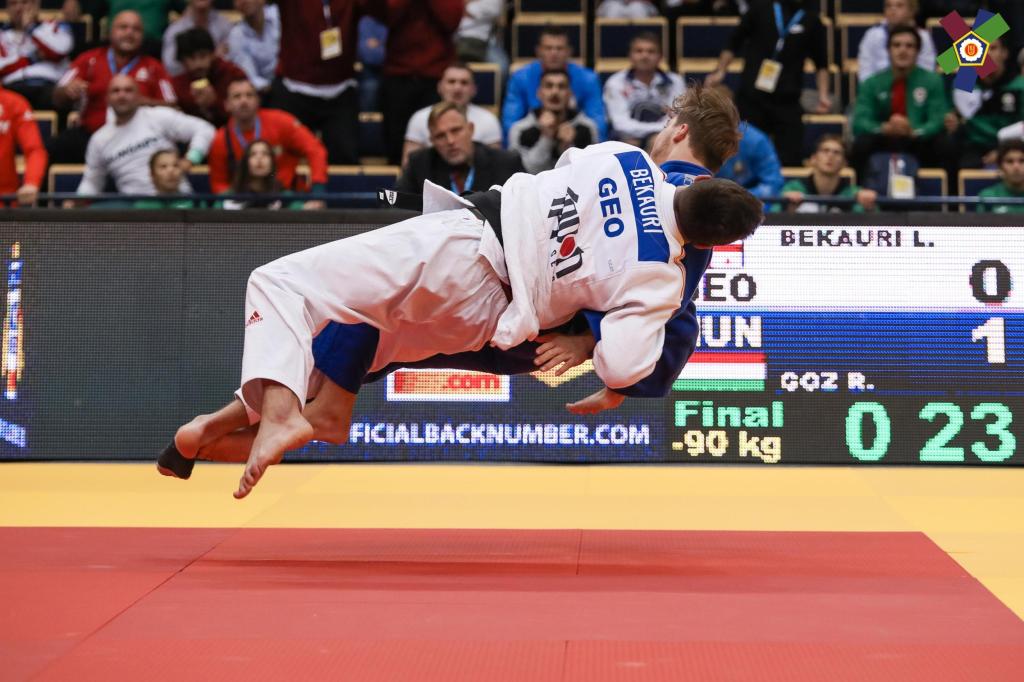 The third and final day of the Junior European Championships 2019 marked celebrations in all of the weight categories and completed a huge collection of achievements for one particular nation.

Throughout the week, Team Georgia has displayed the talent of their athletes, including the first Junior European female Champion, Eteri LIPARTELIANI in the -57kg category. Already at the top of the medal table from day one, the Georgians didn’t give up their lead and eventually finished with an astounding six gold medals, one silver and two bronze.

The first to take gold today was #1 seed in the -90kg category, Lasha BEKAURI. The young athlete has a Cadet European and World title and took the Junior World title in Nassau in 2018 which only motivated him more to complete his collection here in Vantaa, Finland.

Lasha BEKAURI’s first two fights totalled only one minute of contest time, the current Junior World Champion was very focussed and had his eyes on one thing only, however he was stopped in his tracks in the semi final against Russian, Mansur LORSANOV. This nail-biting contest was an incredible one to witness, neither athlete willing to give up and eventually went over 8 minutes of fight time before BEKAURI was able to use his last ounce of strength to win and take his place in the final.

Once again he was faced with a tough opponent, GOZ Roland (HUN). The Hungarian athlete had already defeated the other Georgian BEKAURI, Mikheili, in the quarter final on his road to the -90kg final, but this time he wouldn’t be so fortunate. Despite scoring a waza ari, GOZ was unable to hold on any longer for the Junior European title as Lasha BEKAURI, with only 20 seconds left on the clock went in with ura nage for ippon.

As you may know, Georgians are warriors, we always fight for the victory till the end in every field, we always do our best to make our country, our people, our families happy, for this goal we train really very hard and here we can see the results of it. I am very happy, we won five gold medals, sang our anthem five times and I am really the happiest man today because of it.

Mikheili BEKAURI had come back through the repechage and taken a bronze medal, giving his team mate that extra boost to bring the gold home. This was only the start to a terrific medal haul for the Georgian men on day three.

In the -100kg category, Ilia SULAMANIDZE had an incredible day, the 2018 Youth Olympic silver medallist really proved his worth as one of the younger athletes. As a cadet SULAMANIDZE demonstrated that he would be one to watch, claiming a bronze medal in 2018 at the Cadet European Championships and various Cadet European Cup wins and this year stepping up with a bronze medal win in the Junior European Cup in Leibnitz. However, the strength and success of the team carried him through, not only a string of tough contests but to take the Junior European title.

There was little doubt of Gela ZAALISHVILI reaching the final block today, the +100kg athlete already a Junior European and World title holder from 2018. His explosive techniques stunned the crowd, the sheer power in this heavyweight division was impressive from all of the athletes, however it was the Baku Grand Slam and Zagreb Grand Prix gold medallist that rose to the top. Concluding the contest, he held up his hand, signifying the fifth mens gold medal and the last one of the tournament for Georgia. Also in the +100kg category, Saba INANEISHVILI took a fifth place, only last year taking a bronze medal in the Cadet European Championships and moving up to junior level after a year of no competition to take the bronze medal in the Junior European Cup in Leipnitz.

The 2018 Junior European Champion in the -78kg category, Patricia SAMPAIO (POR) has taken to the senior stage and managed an incredible fifth place in the senior World Championships in Tokyo, and came back in Finland to take her second consecutive Junior European title. The Portuguese had a great start to the day and naturally as it progressed, her contests became more difficult but she handled them well with her experience and added the second gold medal to her collection.

Lea FONTAINE of France did not hold back in the +78kg category today, spending only 2 minutes and 24 seconds on the tatami during the entire day across all four contests. This Junior European title now goes with her Cadet European title from 2018 and she can continue on to take more Junior Cup titles as well as try her hand on the senior circuit.

As always, the athletes performed amazingly and with the strong support of the spectators and team mates, went on to take their titles in the most impressive ways. Tomorrow will see the Junior European Championships in Vantaa come to a close with the Mixed Teams event, showcasing 14 teams altogether.