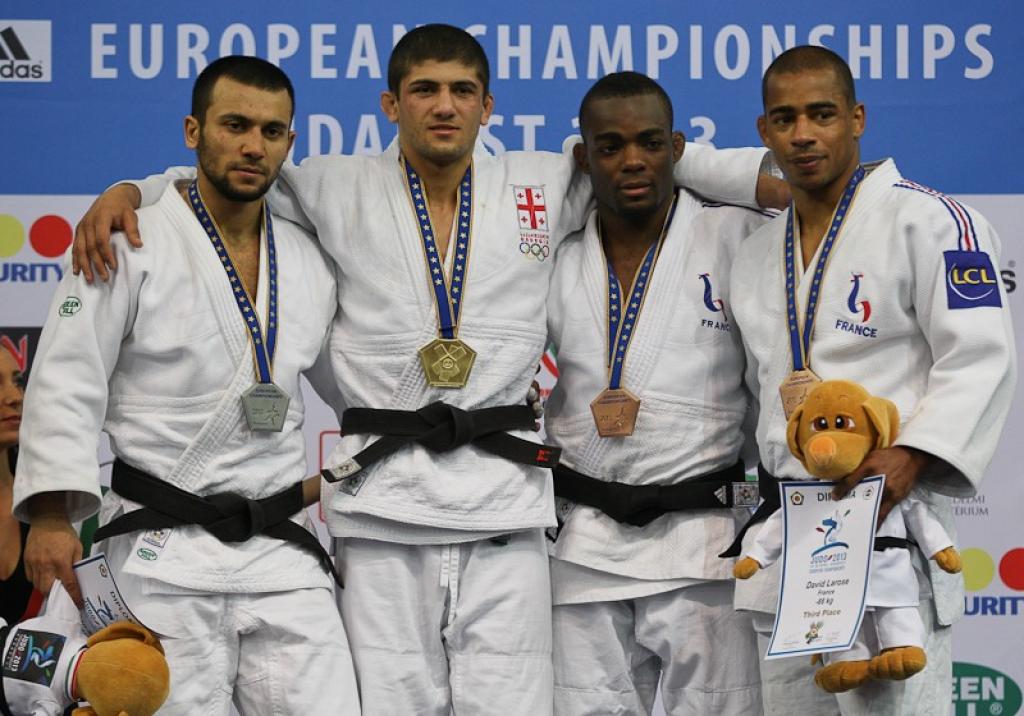 Olympic Champion Lasha Shavdatuashvili claimed the European title this time. Last year he warmed up for the Olympic Games with a bronze medal, not bad for a junior, but this year more was expected. Only  the gold counted for the Georgian of 21 years young.

“This is my first official competition since the Olympic Games and I am glad I proved that winning the Olympics wasn’t a fluke. Since the Olympic Games I had back surgery (disc) and I couldn’t train for a few months. I only came back after New Year, so my time to prepare was short. I prepared intensively for this event.”

In the final he was able to defeat the surprising strong Kamal Khan-Magomedov of Russia. Last year it was Alim Gadanov who dominated this category U66kg, but Khan-Magomedov is a good replacement. He defeated Sugoi Uriarte, the number five of the Olympics, in his first match, followed by former European Champion Armen Nazaryan and Dimitri Dragin in the quarter final. However against ‘Shavda’ he was behind a waza-ari after 90 seconds. Although he didn’t concede other scores, he lost the match.

“It is always a little upsetting to lose in the Final. I lost because I wasn’t able to put out a 100 percent. I did what he expected me to do and he scored. I rushed, I am always rushing, this was my mistake. This is something I’ll work on. (On being injured) I twisted my neck in the semifinal and I honestly couldn’t lift my head anymore afterwards. I needed painkillers to compete in the Final. (on the competition day) I had strong opponents in (Armen) Nazaryan and the two French men (Dimitri Dragin and David Larose), they are all accomplished athletes. (on the Final) I wanted to win and I did have a chance. Shavdatuashvili is the Olympic Champion, but I don’t go into the match thinking I’ll lose because my opponent is the Olympic or World Champion.”

For Shavdatuashvili it’s a message to the World that 29 July 2012 was not just a lucky day when he defeated Miklos Ungvari in the final. Europe is strong continent in this weight category with Shavdatuashvili, David Larose and strong medallists such as Khan-Magomedov and Dragin.

David Larose showed Budapest why he is the number one of the world in the current IJF World Ranking. He slammed Bence Zambori to the ground after 30 seconds for bronze. Larose lost his semi final surprisingly against Khan-Magomedov but came back powerful. “This medal is a certain satisfaction for me. We just won two bronze medals in the same category, which is great. I am a little disappointed I didn’t get to the Final, but I just have to keep improving. (On his learning experience) I learned that even when you don’t feel at your very best you still can push through, fight to the end and take a medal.”

Dimitri Dragin defeated Nijat Shikhalizada in the second bronze final. “I am very pleased. The day didn’t start too well, I wasn’t feeling great, but I kept pushing myself. This is my first medal in the -66kg. (On his competition day) The Russian (Kamal Khan-Magomedov in the quarterfinal) was the toughest opponent. I didn’t give a 100 percent attacking and he was waiting and counter-attacked.”

It was the second gold for medal for Georgia today, a nice gift for the new president David Kevkishvili.